Can You Ear Me Now?

When Tammy asked if I wanted to go for a walk “to Dairy Queen” around 8:15 p.m., I quickly said NO because I had already showered and was ready to relax and watch a movie.

But when I saw how disappointed she looked, I gave in and said we could go but she better hurry.

In what I believe was the fastest time she’s ever gotten out of the house (still waiting on the official notification) we left.

A block away from the house I continued to go straight when Tammy crushed my spirits.

So instead of heading toward DQ, we turned down a circle of homes that are occupied by the elderly that is in the shadow of two assisted living places.

It’s Just Not the Same

Sensing my disappointment in not getting a Blizzard, Tammy attempted to cheer me up.

Tammy: Hey look… There’s some windows you can peep in.
Me: Oh yeah, that’s great. I can watch them die. Oh I think she’s dead already.
Tammy: Maybe you’ll see a naked woman.
Me: That’s not the nekkidd woman I wanna see, but knowing my luck it prolly will BE the
nekkid woman I see.

She knows how I always look into windows when we go into Chicago hoping that someday I’ll catch someone doing nekkid jumping jacks in their window.

So far no luck, but I’m not giving up.

Crazy Cats and What Was That?!? 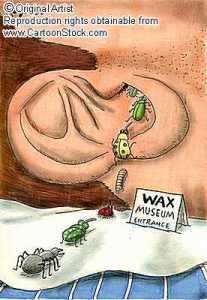 As we were rounding the circle Tammy was telling me about the last time she went this way with Jake when they saw the “crazy cat.”

Tammy: We were walking and I saw a cat over there. I started calling it and when it came over to run against my leg it went like this…

Tammy stopped walking, was staring at the ground and pawing at her right ear but no more words came out. I thought she was demonstrating what was making the cat “crazy” but I was wrong.

Tammy: Oh my God. I think a bug just flew in my ear.
Me: Oh. I thought you were showing me what the cat did.
Tammy: I’m serious. I think a bug flew in my ear. I think it’s still in there too!!
Me: It’s prolly not.
Tammy: You don’t know!! I told you about how a Japanese Beetle crawled into Tim’s (not Tim G) ear.
Me: I don’t think so.
Tammy: Yeah one crawled in his ear and was buzzing so he had to go to the hospital to get it out. That’s gonna happen to me.

I tried my best to reassure her that a bug wasn’t in there and starting asking about the crazy cat again. She told me how it would get right in front of her shins and would jump just as it was about to rub against her.

That kept her mind off her ear for about 43 seconds.

The rest of the walk she kept rubbing her ear and shaking her head.

Quick on the Draw

We had started to make the turn back when I heard what sounded like Tammy slapping herself. I turned to see that Tammy had slowed down and was holding her head.

That slap apparently triggered the thought of a bug in her ear as thoughts started racing through her head.

Tammy: I saw “Monsters Inside Me,” I know what they do in there. They lay eggs and then they hatch in my brain.
Me: That’s not going to happen.
Tammy: It could. It did to that person on that show.

As we were getting closer to home Tammy’s bug paranoia got worse.

Tammy: I need to start wearing ear plugs or cotton balls when I walk so bugs don’t get in my ear.

When we were less than a block away Tammy started running.

Me: Where you going?
Tammy: Running.
Me: Why?
Tammy:  Away from you.

As she was running away I heard her yell back to me.

By time I got to the house, Tammy was still feeling the effects from the night’s events.

Tammy: I can’t tell if it’s from my ear or my face hurts from slapping it.

2 Responses to Can You Ear Me Now?