The day started with us getting up and heading back down to The Wharf to pick up our free Poison tickets. I had called the box office the day before and was told they’d be open at 9 am.

So me being the big dork that I am, wanted to get there right at 9 to beat the crowd so we could get better seats. We had figured the tickets would be in the worst sections and wouldn’t really that bad considering the cost (FREE), but I still wanted to get the best seats possible.

As I was pulling up to the box office, Tammy pointed out that there were big No Parking signs to our right with two SUVs parked in front of them. I told her it was OK because a lot of people in Alabama can’t read so they prolly didn’t know what it said.

There was no line at the box office and I even had to ring a bell to get someone inside to come to the window. I handed them my voucher and was going to tell them that I didn’t need all four tickets, but they turned around before I could say anything. When they returned I heard “Thank You” and four tickets slid out. I grabbed them and headed back to the car.

I had looked online for a good local place to eat breakfast near The Wharf and found a place called Duck’s Diner. It had 47 reviews and four stars (http://tinyurl.com/6zbojah) so I figured we’d check it out.

I hadn’t really expected very much Travel Log material and didn’t bring along any paper or a pen. Boy was that a mistake!!

Once we were seated, our waiter, Justin, walked over, introduced himself and took our drink orders. He saw my keys sitting on the table which launched him into a conversation about how he missed having an actual key for his BMW. The reason was because his wouldn’t start one day from the key fob but if he’d had an actual key it would have been fine.

There was an older man also sitting in his section, but he left before we got our drinks. As Justin was cleaning off his table he started talking to us. I guess it was because we were the only people in the room that was his section.

Justin: I just got a 18 cent tip on a $15 breakfast. Not that I’m worry about money, but I guess he was mad that I wouldn’t give him extra gravy.

He then went on to tell us how the man didn’t think he had enough gravy on his biscuit and wanted more but didn’t want to pay for it. Justin told the man that his step-dad was cooking and he knows he doesn’t give away free gravy.

That led him to talking about how all of these doctors and lawyers, who have a “ton of money,” come in and leave horrible tips.

It was about this time that I had Tammy digging into her purse for pen and paper and when she nicknamed him Jabberjaws Justin.

We started asking him questions about the Poison concert and how we couldn’t believe they were giving away so many tickets.

Justin: I know the owners over there and it just didn’t sell. They only sold like 10 tickets initially. Those guys [Poison] don’t care because they are going to get paid regardless of if there are 10 people or 10,000.

He told us about how it’s a good venue, “there isn’t a bad seat in the house” and how The Wharf has to eat the costs, so to get some of their money back they give away tickets. He also told us about some of the other concerts he’s seen there and “it’s been packed.”

A group of four teens, two boys and two girls, all 18 or younger, were seated at the table next to us. Jabberjaws came over, introduced himself and took their drink orders.

When he came back to see if they were ready to order, he began offering suggestions to the girls.

Justin: You can’t go wrong with French Toast and bacon. That, by far and away, is the top breakfast ordered by women.

He then told then guys that what they ordered was more than enough food and to “save their money” by not ordering the pancakes with it.

When their food arrived, I heard them asking for ketchup so I leaned over and handed them our bottle. One of the girls put ketchup on whatever she ordered (I’m guessing it was NOT the French Toast) when we heard one the guys make fun of her.

Guy #1: Women these days (shaking his head), they put ketchup on everything.

I don’t know how the conversation got started, but the next thing we knew Jabberjaws was talking to the teens about sharks.

He started telling them about how there aren’t a lot of shark attacks around here, but that doesn’t mean the aren’t out there. 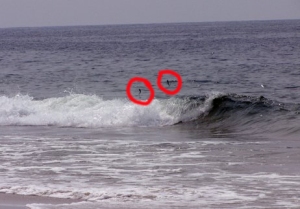 Justin: There are times they are a lot closer than people think… I’ve had them swim right by me but they aren’t looking to eat people because they are after fish… When those fish are jumping out of the water, it’s because they are trying to escape from predators.

Tammy and I both looked at each other when he said that because neither of us thought that was the reason why they were jumping. Apparently it’s not really known why they jump which I guess helps Justin’s case since it can’t be ruled out.

One of the teens asked for butter for their toast which launched him into a tale about how all of the doctors that come in eat healthy.

Justin: They don’t eat butter, or margarine for that matter, because they know how bad all of that stuff is. They’ll order oatmeal or a spinach omelet with egg whites and they all get rye bread.

Thanks for making me feel like a fat, unhealthy slob for ordering the Meat-Lovers Omelet this morning.

When he overheard the teens talking about posting something on Facebook/Twitter he chimed in again. This time telling them how he felt when he heard some eight-year-old kid updating their account.

Justin: I won’t let my kids have Twitter at that age.

One of the boys was wearing a camouflage hat that caught Justin’s attention (I don’t know how he could see it… get it?).

Justin: You hunt? You don’t see people wearing camo down here unless they are rednecks. But back in Tuscaloosa people wear it all the time, even people that don’t hunt.

The teens finished and headed out, but before we left we were treated to a few more nuggets of Jabberjaw’s wisdom.

When another waitress was handing Justin her ticket so he could total it up, he threw down some truth that he must have picked up from the Johnnie Cochran School of Rhyme.

Looking for Love in All the Wrong Places

Something came up about the people in the Gulf Shores/Orange Beach area and Justin told us how they are all really nice but they are missing something.

Justin: I’m not saying Tuscaloosa is the best place in the world, but it’s got to be close. There are a lot of “marriage-material” girls there.

I wanted to ask a follow up question about that, but realized rather quickly that it was in my best judgment to not do so.

Tammy: Oh God, please don’t get him to talk anymore.

I obliged and we bid Justin farewell. As we were pulling out of the parking lot we spotted a pretty new looking BMW parked in the grass, just out of the lot but right by one of the entrances.

No Beach for You

Since my mom, stepdad, stepsister and two nephews (aka The Boys) were on their way down to stay with us we decided we’d just go to the pool so we didn’t have to lug everything out to the beach. But even that was a chore.

We went to the smaller, more private pool first. There were maybe six people at this pool, three people in the water and the rest sitting in the chairs. It was quiet and more secluded.

I had worked up a sweat just walking there and was ready to cool off, so I immediately threw my towel down on a chair and took my shirt off. I had even pulled out a magazine that I wanted to read when I noticed Tammy looking around.

Tammy: You think it’s crowded at the other pool.
Me: How would I know that? We came here.
Tammy: I know, I know, but I think I want to go over there instead.
Me: Why? What’s wrong with this one?
Tammy: Nothing, I just think I like that one better.
Me: Ok. Then go over there to see if there are chairs because I don’t want to take all of our stuff if there isn’t.

With that she was off. I figured Tammy prolly wouldn’t actually save two seats but would just come back to say there are seats open so I walked to the side of our pool and looked for myself. I saw open seats, gathered up our stuff and headed out.

There were a bunch of people coming down the walkway from the beach and I was worried they would be heading to the pool so I picked up my pace.

I started handing towels to Tammy over the fence so she could put them on the chairs.

Me: Here, put these down.
Tammy: Are these chairs OK?
Me: Are they broken?
Tammy: No. I just didn’t know if this spot was OK.
Me: It’s in the sun so that’s OK with me.
Tammy: (rolling her eyes) You’re such a jerk.

I really wasn’t trying to be a jerk. I had just created a game in my head where I was trying to get seats before the other people did. I didn’t care if they didn’t know if they were playing. I just wanted to win, which I did.

We got settled into our chairs and decided to get into the pool to cool off. Once I got in I noticed that the “deep end” wasn’t very deep at all. That’s when I decided to see how accurate the numbers sprayed on the concrete were.

Me: Hey Tammy, come stand here.
Tammy: Why?
Me: I wanna see if their measurement is right.

With that she held her nose and attempted to stand on the bottom. I grabbed her arm and pulled her out of the water.

Me: It doesn’t count if you stand here.
Tammy: Why? (rubbing water out of her face and reaching for the side of the pool)
Me: Because you cheated.
Tammy: What? No I didn’t.
Me: Yes you did. It’s sloped here, so that one doesn’t count. You gotta do it again but more out there.
Tammy: Fine.

She headed out a few feet, held her nose and tried again. I was surprised at how much of her head was actually sticking out of the water and touched her eyebrow to “mark” the spot.

Me: There was more of you out that I thought would be.
Tammy: Really?
Me: Yeah, the only came up to your eyebrow.
Tammy: That’s because I was standing on my tip-toes.

I didn’t feel like making her try again accepted that the markings were “close enough” accurate.

For those that don’t know, Tammy is only about 5-foot tall. I say about because if she’s heightening by wearing “whore heels” then she might hit the 5′-2″–5′-3″ mark but flat-footed she’s maybe 5-foot.

We stayed in the pool until around 3-3:30 because Mom had said she thought they’d be there around then and to get ready to see Poison.