Sometimes the smallest things can completely throw off your day. Today is one of those days.

There were signs all around me this morning foreshadowing my day ahead, but I simply ignored them.

Go back to sleep will ya?

It actually started during Friday’s early morning hours as I was trying to sleep. I woke up around 3 a.m. because I had to go to the bathroom and everything was fine.

When I got back in bed the first warning signs started to appear; I just didn’t know it at the time.

I have a hard time getting back to sleep after I’ve been woken up. But if I get up and go to the bathroom in the middle of the night, I’m almost asleep again by the time my head hits the pillow.

That wasn’t the case tonight. I got back in bed and closed my eyes but my brain wasn’t ready to wander back into Slumber Land. Instead my brain started churning and I know from personal experience that means trouble in the middle of the night.

I wish I had a song stuck in my head.

A few years ago my brain woke me up singing. Yup, singing. Apparently it really liked me listening to David Allan Coe’s song “You Never Even Called Me By My Name” because it decided to spend the rest of the night playing it over and over in my head. It was so bad that took months before I could listen to that song again.

I would have been happy if it had been thinking about a song last night. Instead it kept thinking about a “heated” interaction I was involved with on Facebook with a very close friend of mine a few hours earlier.

I put my arm over my face, hoping to smother the thoughts. Didn’t work.

I rolled over on my left side then my right, trying to shake the thoughts out of my head. No luck.

I thought about who to start on my Fantasy Football teams, hoping to to distract the thought with a shiny object, which usually works for me. Nope.

I wouldn’t allow myself to look over at the clock on Tammy’s side of the bed because I knew if started watching the time I was defeated.

I think my brain — which I believe sometimes should be in a straight jacket — figured out that it/we, OK, fine, that I may have written things that came off harsher than intended; that what started out as harmless ribbing from multiple parties turned into somewhat of a totally unnecessary pissing match and used sleep deprivation as punishment.

Straight Out of The Godfather

I began drifting in and out of sleep when I heard some song coming from the alarm clock. Tammy hit snooze and I started nodding off again only to be jarred awake by music again.

I continued this dance for the next 20-30 minutes before Tammy started nudging me, which meant it was time to get up.

I sluggishly found my way to the bathroom and showered not knowing that the second warning sign was only a few minutes away.

The rest of the morning wasn’t out of the ordinary, make coffee, finish getting dressed while watch the news and Mike & Mike, let Savannah out, let Savannah in, brush my teeth, get a cup of coffee, gather my things and head out to the car.

When I got outside I noticed something strange on the back patio and went over to take a look.

It was fur. Quite a bit of fur, but it wasn’t the color of our cat, Kiara.

Next to a patch of the fur is what appeared to be a short, stumpy, black earthworm.

I walked to the car to put my things down so I could investigate further when I noticed something odd in the middle of the driveway.

My brain, which I think had fallen back asleep, jumped into action and realized that whatever it was must belong to what had been de-furred. 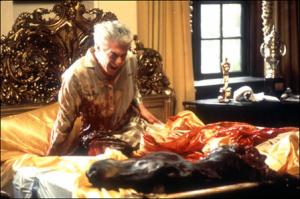 I knew Kiara had been out all night because she was waiting by the door when I let Savannah out for the morning. I didn’t think anything about it since she typically stays out all know whoring.

I went over to the object in the driveway and when I realized what it was I went to get Tammy.

I walked inside to see Kiara cozying up on Tammy’s lap.

Me: You need to come outside and you may not want to let her do that.

Tammy headed outside with me and I showed her the treasure Kiara left for us, the head of a rabbit.

Thumper’s head was in the middle of the driveway about 5-7 yards away from the clumps of fur.

Me: This is why I hate Kiara being inside because when she’s outside she eats critters.
Tammy: Well what do you expect her to do if she’s left outside all the time?

I didn’t say anything. I knew from experience not to enter into a skirmish with Tammy about the cat.

Tammy went back inside and I went to get a shovel to scoop up Peter Cottontail’s skull and what was left of his hide.

I couldn’t believe that all that was left was some fur, a skull and what I originally thought was an earthworm.

It didn’t dawn on me until later that Kiara prolly wasn’t the one that devoured everything. I think Savannah stopped by the Br’r Rabbit Buffet during her morning bathroom visit.

I’m pretty sure I’ll have a nice surprise waiting for me when I get home today as Fluffy’s Revenge is bound to have hit Savannah.

Not the actual clouds, but you get the point.

Clouds on the Horizon

I cleaned up all that was left of Bugs, including his black earthworm, and headed off to work with the sun shining brightly.

I was about halfway into my 45-minute commute when the third and final sign of the day revealed itself. But yet again I didn’t connect the dots.

I noticed the line of clouds off in the distance and remembered hearing someone on the radio mention it being “odd” that clouds and storms were moving westward into our area.

I looked up at my sunroof and decided I didn’t need to close it just yet and finished my drive to work.

I settled in at my desk knowing that one of the owners of the company would soon arrive with two boxes of Friday morning bliss.

Someone that sits next to me popped over to let me know they haven’t arrived. It was almost 8:30 and I figured he was just running late.

Around 8:45 I stuck my head in the kitchen hoping to see those orange and white boxes on the table. The table was barren.

I walked over and saw the owner’s door was closed and his light was off.

A few minutes later I said I don’t think the owner is coming in today. Another head popped up and said they just saw him walking out the main office doors.

At that moment I knew.

Oh, I still held out hope that he was going to pick up our Friday treats but inside I knew and started to connect the dots.

All of the signs had been pointing one thing, that I was going to have to struggle through the day without any sugary fried dough… that today was a No Donut Friday.

This entry was posted in Daily Life and tagged 2011, daily life, donuts, Had a bad day, humor, life, Mike & Mike, No donut for you, no donuts, no donuts for you, Peter Cottontail, rabbits, signs, The Godfather. Bookmark the permalink.