Movies and Me Don’t Mix

My wife’s birthday isn’t until Monday, but I went ahead and let her have her present last night.

A few days ago she had mentioned that she’d like a gift certificate to Victoria’s Secret, which of course I haven’t gotten. So when she mentioned an “alternative” gift last night I jumped at the chance to give her what she wanted and watched a movie with her.

That’s right, I said I watched a movie with her. That’s what she said she wanted.

Tammy: I’m gonna make you watch a movie with me for my birthday.

Initially I chuckled when she said that, so when I decided to take her up on the offer a few minutes later she was unprepared.

I’ll watch it but I won’t enjoy it.

Me: C’mon, let’s get this over with.
Tammy: What? Now? I just starting watching this. (some episode of 20/20 where someone got killed by someone they knew. Wait, aren’t they all like that?)
Me: Oh please, you don’t even know what’s going on.
Tammy: Yes I do.
Me: No you don’t. Besides you’re all of SEVEN minutes into it so you aren’t that invested in it.

For most of you, the thought of sitting down to watch a movie is a weekly routine, something that’s planned and looked forward to.

That’s not the case for me.

It’s not that I don’t like movies, it’s just that they are too long.

I have no problems at all sitting to watch a sitcom. I can even sit through hour-long dramas or reality shows.

Well, I should say I can watch all of those shows, as long as we have recorded them. That means I’m only investing a maximum of 40-42 minutes since we can skip through the commercials.

Watching “live” TV is only reserved for sporting events.

Sit Still, Will Ya?

It’s not that I’m afraid of commitments, I’ve been with Tammy over 12 years, or that I think my time is too valuable to waste it with on a movie.

I just don’t like the thought of having to pay attention for 2 hours. Even though we fast forward through the commercials, the time still serves as a mental break for me.

This might come as a shocker to some of you, but I have a hard time sitting still for a long period of time.

I’m not one of those people that has to be sitting on the couch to watch TV. In fact, I rarely sit for the entire length of a TV show.

That’s also one of the reasons we don’t go to movie theaters.

It’s Open for a Reason

It’s hard enough for me to commit to sitting still for a movie at home but going to a theater adds so many more levels of stress that it makes it almost unbearable.

In the 12 years I’ve been with Tammy I could count the number of movies we’ve seen at theaters on both hands.

The theater in Woodstock is really small (only four screens) and doesn’t have many seats, which only raises my stress level. 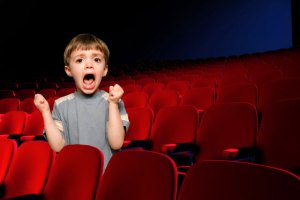 What's going on inside my head when you sit next to me.

If we arrive early enough I can get a seat next to the wall, which means I can actually relax and only have to worry about sitting still.

If we arrive late, I’ll intentionally leave only one seat between me and the next person.

My thinking is that most people go to the movies WITH someone and since there is only one seat open they won’t sit by me.

If I leave one empty seat next to me, it’s my way of saying, “I do NOT want you to sit here.”

That doesn’t always work, which bothers me through the previews and into the start of the movie.

You wouldn’t know we don’t watch a lot of movies if you looked at our DVR where we currently have TEN recordings.

But a little further investigation would show that SIX of the movies have been on there for more than 2 months and some of them are over a year old.

I’m pretty sure I’ve even deleted movies without Tammy’s knowledge because I knew we’d never watch it. Don’t worry she doesn’t read my blog so she’ll never find out.

Meet my demands or else there will be trouble...

The best way to get me to want to watch a movie is if it falls into one of my acceptable categories.

Scary movies: Not stupid scary movies with unreal monsters or creatures, which rules out any of the stupid vampire/werewolf stuff (vampire are stupid)(vampires aren’t stupid — Grace), but more suspenseful, keep you on the edge of your seat movies. Examples: “Blair Witch Project,” “Paranormal Activity,” “Saw,” “The Haunting in Connecticut”

No subtitles: Subtitles in a movie means I’m not watching. The worst is when subtitles are slipped into a movie I’ve already committed to watching.

Last night’s movie, Hereafter, which I had been looking forward to watching, had subtitles which I wasn’t too happy about.

Me: They better start speaking some United States or I’m out.
Tammy: What, you can’t read?
Me: If I wanted to read I wouldn’t be watching TV.

No Time for Drama

If I’m watching a drama it’s most likely because Tammy has been hounding me for a few weeks.

Dramas move too slow and I end up getting bored. When that happens I slip off to the computer and Google the movie so I can find out what happens. That way I don’t have to pay complete attention to the movie anymore.

You’re Telling Me There’s a Chance? 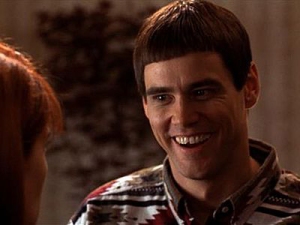 There’s one more element that can get me to watch a movie, regardless of the category.

Even the slightest chance it increases the odds that I’ll watch it.

Just to be clear, I’m not talking about Kathy Bates in “About Schmidt” nudity.

Tammy often suggests “The Blind Side,” which you’d think I like since combines several elements that I enjoy (comedy and football), but it’s been on our DVR for over a year.

Wait, Sandra Bullock isn’t nekkid in that is she???

7 Responses to Movies and Me Don’t Mix