A few more pictures in the life of Savannah to help prove my point from my previous post and to make everyone jealous of how good she’s got it.

Savannah’s too short to look out our windows, but from time-to-time I find her checking things out. Not that she’d really do anything if she saw something happening.

I’ve often said Savannah would make a great watchdog because she’d watch someone take all of our stuff, while licking them and peeing on the floor.

Does this make my butt look big??

I’m Gonna Soak Up the Sun

Savannah’s more fond of watching the world go while sitting outside on the patio.

Once we thaw out from the harsh Chicagoland winter, Savannah wants to be out in the sun as much as possible.

She’ll find a spot of sun no matter how small it is.

If there is sun Savannah will find it.

In the summer she’ll get on the chairs and layout with us.

Working on her tan.

Sometimes I walk outside and find that she decided to climb into one of the patio chairs. Yes, she actually climbs up on them by herself.

She’ll just sit in the chair and reign over the neighborhood.

What? You've never seen a dog in a chair before?

I think something is wrong with the ball.

Savannah is only active in small bursts so we don’t play a lot of sports games. Fetch usually consists of her making a maximum of three trips before she decides the game is stupid and doesn’t want to play anymore.

The other reason we don’t play very many sporty games is because Savannah’s rough on the equipment.

One time we found a baseball at a local park and she was so excited to play with it.

Less than an hour later, not so much…

I don't know how it got like that, honest.

But there’s not doubt that Savannah’s true love is sleeping.

I find her passed out in a variety of locations, and positions, oblivious to the world.

I have to wake her up in the mornings and MAKE her go outside. 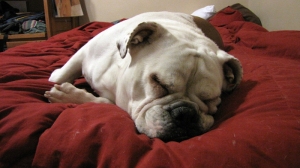 Passed out again, this time on Jake’s bed. 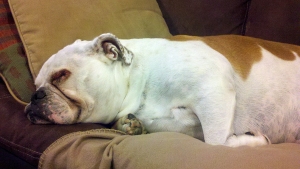 Smiling while she sleeps.

Savannah playing possum and, yet again, showing her cooch.

For Halloween Savannah’s going as a vampire.

This entry was posted in Daily Life and tagged daily life, humor. Bookmark the permalink.

4 Responses to The Dog Days of… Savannah pt. II