Friday’s Adventures of the No-So-Handyman

If this Friday afternoon was any indication of how the rest of the weekend is going to be then I’m not getting out of my recliner the until Monday. 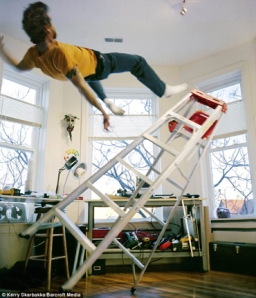 Not a big fan of ladders.

For years I’ve tried to be the handyman around the house that us men are sposed to be, but it’s time to accept that I’m more of a Jack-of-No-Trades.

Webster’s defines a handyman as someone competent in a variety of small skills or inventive or ingenious in repair or maintenance work.

Wikipedia says a handyman is a person skilled at a wide range of repairs, typically around the home.

Another definition I found called a handyman is a person able or employed to do occasional repairs.

Despite the fact that I’m borderline competent, hardly skilled and barely able to do tasks around the house, I still give them my best Do-It-Yourself attempts.

I’m not the Tim “The Toolman” Taylor kind of handyman that ends up in an emergency room after tackling a job. But Tammy knows all to well that if a project should take an hour then it’s going to take me 3-4 hours and it still might be done properly. 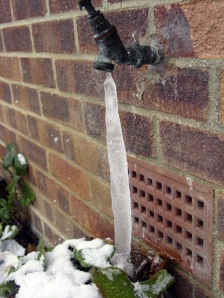 This is OK, right?

Last summer I took it upon myself to try to fix a spigot that had been leaking on our patio for weeks which meant I had to turn off the water to the house.

I don’t know where I went wrong because the directions I found online made it look so simple.

The next 4+ hours were spent with numerous trips to the hardware store and turning the water off and on so many times that I lost count. 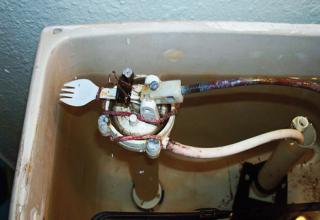 I was at my wits end because no matter what I tried it kept leaking. Turns out it was leaking because I wasn’t tightening it enough. Yup… four hours of frustration because I didn’t tighten it.

I once used Duct Tape to try to stop one of Tammy’s tires from leaking. I started to fix our toilet around 8 one Sunday night and by 9 had it so screwed up we couldn’t use it Monday morning.

Those are just a few of my many no-so-handy moments.

Up on the Rooftop 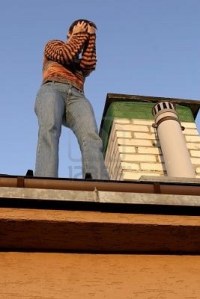 I'm pretty sure this isn't safe.

Friday afternoon my friend Tim G dropped off a ladder so I could try to clean out the gutters on the house.

The ladder wasn’t tall enough to reach the roof except from the front stoop which meant I’d have to walk around on the roof to clean the gutters, something I wasn’t too fond of.

The slope of the roof had me worried because me and “open heights” aren’t friends. I decided to test it out anyway.

But instead of using the ladder I decided I’d climb out of one of the windows in the attic. I had Tammy stand in the front yard so she could call 911 in case I fell.

Since she had just gotten home from work she wasn’t too happy about her new job assignment but she went anyway.

I ran up to the attic, opened the window, climbed out on the roof and walked to the edge so I could check out the gutters.

It only took about 2.4 seconds for me to realize I wasn’t going to be able to clean them this way.

Me: There’s no way I’m gonna be able to squat down and clean out the gutters from here.
Tammy: Ok.
Me: I mean, it’s just too steep and I don’t feel comfortable bending over so close to the edge.
Tammy: Then go inside.

All I could think about was how loving Tammy is as I headed back to the window and started to crawl inside.

Once inside I pushed the window shut and apparently my Not-So-Handy button too, which caused the task to be not-so-simple anymore.

I had expected the window to close when it hit the wall, but instead I heard the sound of glass shattering.

I felt my jaw drop as I stood there watching glass slide down the roof toward Tammy. She yelled at me for closing it too hard before she realized there were shards of death hurling down toward her.

I stared down at her for what felt like 20 minutes, not believing what I had just done.

I ran downstairs and headed outside to start picking up the pick chunks of glass.

I looked up at our snaggletoothed window and shook my head as I added another notch to my not-so-handyman tool belt.

Me: Now we really ARE the white trash neighbors. 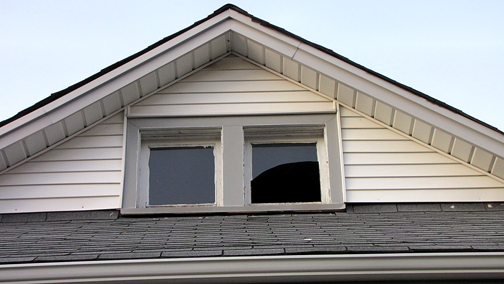 Another Not-so-Handy moment from JWo.

We already feel like we’re the white trash of the neighborhood but tonight we found out that we’re also the clueless/out of the loop neighbors too.

Earlier in the week we noticed there were a lot of cars at our neighbor’s house across the street. It was odd because the Rice’s don’t usually have a lot of people over.

Tammy wondered if something had happened to Mr. Rice, the older man who lived there.

Tammy: You don’t think something happened to Mr. Rice do you? When’s the last time you saw him?
Me: I saw him walking outside this weekend.
Tammy: You did? I didn’t see him.
Me: That’s because you can barely see out of the windows.

As each day passed we noticed the cars were still there and that we hadn’t seen Mr. Rice.

Tammy brought it up again tonight.

Tammy: I really think something must have happened because those cars have been there all week.

I went to our local newspapers website and checked the obits.

Unfortunately I found the name I was looking for and broke the news to Tammy.

We were both very sad about losing Mr. Rice, who was always willing to lend a hand or let me borrow his tools.

But what made it worse is that he died on Monday and we didn’t know until Friday.

This entry was posted in Daily Life and tagged daily life, handyman, humor. Bookmark the permalink.

5 Responses to Friday’s Adventures of the No-So-Handyman