One thing I love (and miss) about the South is all of the fried food. I know it’s bad for me, but I always gorge myself on whatever fried goodness I can find when I’m down there.

But there’s one Southern Fried dish I hope I never have to taste.

Fun Times with an Old Friend

Daniel (L) and me (R) playing home run derby inside in the late 80s.

A few weeks ago my friend Daniel was in Chicagoland on business and we decided to meet up for dinner as we often do when he’s up in Yankee-country.

Daniel and I have known each other since the fourth grade back in Tupelo and try to meet up at least once a year to catch up, drink a few adult beverages, relive our past and listen to 80s hair band music, all of which is done with our wives shaking their heads and rolling their eyes.

Mitch, a co-worker, accompanied Daniel on his most recent visit to the area.  This wasn’t a surprise as I’ve met several of his former co-workers, although I think Tammy and I may have emotionally traumatized one on Daniel’s 2010 visit. 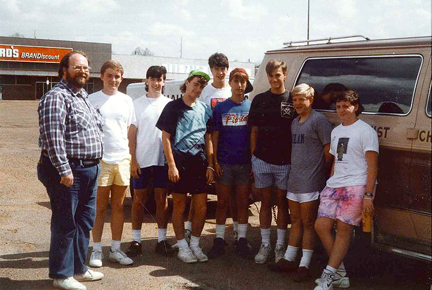 You Ain’t From Around Here

I walked into the hotel and found Daniel sitting in the lobby reading a newspaper. I sat down on the couch and started talking as if we’d seed each other a few hours earlier.

Daniel texted Mitch to  let him I was there and Mitch said he’d be down soon. He also told me that Mitch was a little worried about me tagging along for the night.

Daniel: So Mitch was asking me if you’d be OK going out with us tonight.
Me: Why?
Daniel: Well, he’d been talking about wanting to go out and “drank some beer” and didn’t know if you’d be up to that. I told him you’d be fine with it.

I noticed Daniel said “drank,” which I thought was odd because he normally doesn’t say that so I figured it was him quoting Mitch directly.

That got me wondering if I would be able to spot Mitch when he came into the lobby so I started a game of “Where’s Mitch?” It didn’t take long before I was able to find him.

When he rounded the corner I knew instantly that it had to be Mitch. He had a camouflage hat, a light camo-green button-down shirt, boots and jeans with a horseshoe belt buckle.

Don’t get me wrong I’m not making fun of him. I spent 25+ years growing up in the South, mainly Mississippi and Alabama, so I know that “look” and don’t see it up here much. When I do it’s usually someone dressing up for a party or someone visiting the area.

We shook hands, introduced ourselves and headed out for dinner.

On our way to get some deep dish pizza at Giordano’s, Mitch and Daniel were talking work.

Daniel’s got a Southern accent, but Mitch’s was a little more pronounced. Being around them made me feel comfortable and relaxed as if I was visiting my family.

We got to Giordano’s, got some beer, ordered our pizza and just talked. I seriously don’t remember there being a time where we were sitting there in silence (after the pizza came not included).

I only spent a few hours with Mitch but he had such a genuine feel to him. Even though he barely knew me, I felt like he would let me stay at his house if my car broke down in southern Arkansas.

Mitch’s kids are older so we exchanged stories about how our teens did (or didn’t) do things and teased Daniel about what he’s got to look forward to.

Mitch told us a story about his youngest son, Will, and a friend of his that stays with them during the summer.

Mitch had built an iron archway for the end of his driveway and was going to hang lights on it so his wife, who has trouble driving at night, could see the entry better.

He had laid all of the lights out on the ground and sent his son and his friend to the house to bring back the ladder in his pickup truck.

They quickly earned nicknames when they returned.

Mitch: Will came back with the truck and when he got out all I heard was POP-POP-POP-POP. I looked up and saw him walking on the lights I had laid out.

But that wasn’t the end of Mitch’s misery.

Mitch: Then Will’s friend gets out of the truck and I hear it again, POP-POP-POP-POP. I started screaming at them to watch where they were walking. They looked at me like, “What?” because they had no clue. I just shook my head and said, “From now on I’m calling you Moe and you Ron because it takes two of you to make a moron.” 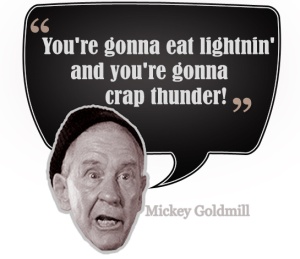 We all had a good laugh at that but the one that made the biggest impression on me was the story that follows.

Mitch said his son, Will, had recently come to him for help because he was being picked on at school by someone who was bigger than him.

Mitch: He prolly comes up to here on me now (just below Mitch’s eyes) and he prolly ain’t gonna grow much more. His Momma’s all of 4-foot-11 and as you can tell, I wasn’t blessed with much height, so he didn’t stand a chance of being tall.

Mitch told him he needs to stand up to the bully and Will said he wanted to but didn’t know how. So Mitch channeled Micky, from the Rocky movies, and told Will he’d help teach him some things.

Mitch: So every night for the next couple of weeks we’d go through some of the stuff my Dad taught me. It wasn’t much but I at least wanted him to be able to defend himself.

Mitch: Then one day he asked if I would drive him to school. I told him I could but since I normally don’t I asked why he needed me to. He looked at me and said, “Today’s the day.”

Mitch said he knew he was going to be late to work that day because he’d be getting a call from the school soon.

He said the drive to school was pretty quiet but as soon as Will opened the door to get out he heard the bully taunting him. 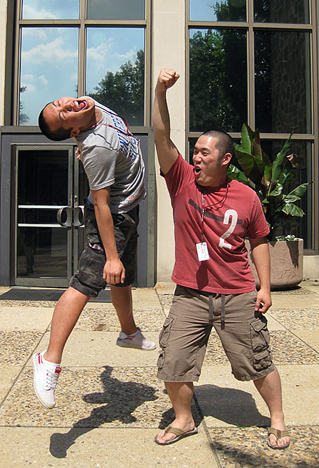 Mitch: I mean he lit into Will before he even got the door closed. Will looked at me as he got out and I knew I didn’t need to be in a hurry to leave. I started pulling out real slow and was watching to see what Will was gonna do.

Mitch told the story in such a way that Daniel and I were on the edge of our seats waiting anxiously to hear what happened next.

Mitch: The kid got right in front of Will and wouldn’t let him get by. I could tell he was just mouthing off to him. That’s when I saw Will rear back and uppercut him right in the chin.

Mitch: Blood went everywhere because the kid bit his tongue. It shot out on Will’s shirt and was pouring out of the kid’s mouth. When I saw it I turned around and started looking for a place to park.

That would be a good ending to the story. Another lesson in someone standing up for themselves and giving the bully what he deserved.

In Case I was Unclear 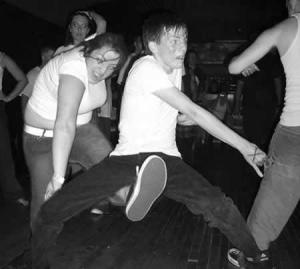 So there's no questions...

Mitch: But Will wasn’t done. As the kid bent over and grabbed his chin Will grabbed him by the hair and kneed him in the face. The kid fell over on his back and Will lined up and kicked him square in the balls.

Mitch: At this point I’ve parked and I see the Dean running over to keep Will off him. He sees me walking up and asked if I knew he was going to do this. I told him no.

The Dean was starting to scold Will when several girls who witnessed everything came to his defense.

They were telling the Dean that Will shouldn’t get in trouble and that it wasn’t his fault. They said he told the guy to stop and get out of his way but he didn’t and kept picking on him.

The Dean rounded everyone up and took them to his office.

Mitch: We were all waiting in the chairs outside and the kid is sitting there holding his chin with blood all over his shirt.

Mitch: When we got to talk with the Dean, Will started telling him that he’s not that kind of kid but he’d had enough. He said the guy picked on him every day and would step on his ankles and wrists during football. He’s never been in trouble at school and didn’t like doing that kind of stuff but he couldn’t take it anymore.

Mitch: The Dean said he wanted to talk to the girls and get their side of the story and told the boys to leave. They originally wanted to expel Will but I told him that wasn’t going to happen.

Thanks to an early morning, severe ass-whooping in front of everyone, Will is still in school and has been bully-free.

I guess the Dean was afraid of Mitch going “all Will” on him.