The Old Man and the Sheets

Honesty goes a long way in my book.

Well, I made it through another Tammy-less day but this time I didn’t sleep alone.

For those of you that aren’t up-to-date Tammy is in Florida which means, for the most part, I’ve been left alone. After sleeping alone in the bed Monday night I took measures to prevent it from happening again.

And when I say I took measures, I mean that I literally made someone sleep in the bed with me even when they prolly were perfectly content with their previous arrangements.

No, I didn’t run over to the train station and bring home the most honest looking hobo I could find. I wouldn’t do that because hobos scare Jake.

But I’m getting ahead of myself.

I made a few stops on my way home to do a little Christmas shopping (I had to start sometime) AND to pick up some new sheets for our bed.

Finding stuff on my Christmas list was easy but finding new sheets is what has been causing some problems. Actually I think my feet are causing the problems.

The last two sets of sheets we’ve had have ripped and almost in the same spots on my side of the bed.

No, it’s not at the edges of the bed. It’s not even in the middle, high-probability “blow out” areas. It’s been at the end of the bed, near my feet.

Tammy has her own explanation as to why this keeps happening.

Tammy: It’s because you got “Gorilla Feet.”

Truth be told my feet really aren’t that bad but that’s not the point.

We needed new sheets because our last set unexplainably ripped in the area where my feet tend to be.

Last week I was able to find a full-size set of sheets that I could stretch to fit our queen size bed.

But they were nearing the end of their run and were popping off the corners and once that started happening I knew I had to get a new set ASAP.

I already knew I was a Water Snob (has to be spring water because I can’t stand the taste of purified water) and a TV Snob (if it ain’t in HD it ain’t worth watching), as evidenced by one of Tammy’s Facebook posts.

But now it looks like I’m also a Sheets Snob because it took me a week to finally find and pick out sheets that were good enough to get intimately close with me.

Please Don’t Make Me Go There

I had narrowed my choices down to two spots and was determined to sleep on new sheets.

I mulled over the selection at the first location, unzipping the packaging so I could give the thread count the “feel test.”

I already knew I going to try my best to not go under a 400 thread-count without breaking the bank. I mean, they are just sheets and we may be snobs but we ain’t rich snobs.

The second place was ONLY an option because Tammy saw they had sheets on sale in the Sunday paper ads, otherwise I would have never gone there.

I’ve documented how much I love me some Wal-Mart so I kinda felt like I was cheating going into the store.  But Tammy said they had 700 thread-count sheets for $39.99 so I HAD to do it.

My dislike for K-Mart heavily outweighs how much I love me some Wal-Mart, but I needed some new sheets so I’d make this exception.

Do NOT Bring That Home With You

I pumped myself up, took a deep breath and walked in determined to get out of there as soon as possible.

I'll take the Stinkbubble over K-Mart 7 days a week.

I hadn’t even made it past the line of registers when I was already thinking about leaving and “settling” for the 400 thread-count set but I pressed on.

It’s been years, literally, since I’ve been in a K-Mart and had no idea where I was needed to go. When I stopped to look around is when it hit me.

I had forgotten about it, but quickly remembered that it’s one of the reasons why I don’t like any of the K-Mart’s I’ve been in. The smell.

I can’t exactly put my finger on what it is but I don’t like it and is prolly the biggest contributing factor as to why I don’t like being there.

The Smell, the K-Mart Smell.

It makes me feel like I used to during the few episodes of The Waltons or Welcome Back Kotter I watched as a kid, dirty and poor.

I don’t know how they get all of the stores to smell the same. It’s as if they pump in a mixture of freshly squozed hobo’s taint, mothballs and the stale, recycled air from airplanes.

I had to keep moving because the longer I stayed in there the most likelihood it would permeate my clothes. I knew we’d have to move if I ended up bringing it home.

Gotta Get These in Pronto!

They were down to a handful of the 700 thread-count sheets left and only had two queen sets, one set in white and the other in vanilla.

I knew from experience that white sheets don’t stay white very long so I grabbed the vanilla set and checked out.

The cashier asked me if I was part of some rewards program or something and as much as I wanted to say something like, “Don’t you smell that? Do you really think I’m coming back here?” I kept my composure.

When I walked into the house I could tell Jake had been doing laundry and told him I had bought some sheets and HAD to get them washed tonight before I could put them on the bed.

There was NO WAY I was going to put them on without washing them and risk having The Smell get into my skin.

Down at the End of Lonely Street 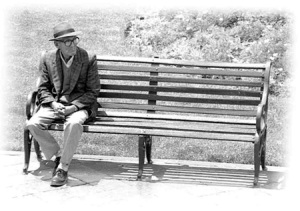 I got all this bench but it needs you sitting on it.

While Jake was getting ready for his night class, I read over a paper he was going to turn in while eating a leftover piece of pizza.

He left a few minutes later and I was alone.

Well Savannah was there but she was taking her pre-bedtime nap at this point.

I started picking up around the house and  tried to find stuff to watch on the TV upstairs but, man, Tuesday night SUCKS.

All of my shows are on the DVR in the basement and I eventually went down there to watch TV while I waited for my sheets to finish drying.

Not Letting a Sleeping Dog Lie

Not actually from last night, but you get the point.

When the sheets finished, I headed back upstairs to put them on the bed and kept looking to see if Savannah was watching me.

I even tried calling her when I had everything ready and was about to get in bed.

Apparently her pre-bedtime nap had crossed over into Out-for-the-Night and I could tell that if I didn’t take action she would have slept on the couch all night.

So I woke her up.

She made a few grunting sounds them gave me a look of disgust as she headed toward to door to pee (might as well go since I’m up).

When she got back she went to our bedroom and I put her on the bed. I quickly climbed in and she started to head to her “spot” at the foot of the bed on Tammy’s side.

I grabbed her and made her lay down next to me as I turned out the light. I was hoping she’d stay by me at least until I fell asleep but she didn’t.

Less than five minutes after the lights were out she got up and headed back down to her spot where she stayed the rest of night 2 without Tammy.

4 Responses to The Old Man and the Sheets