Nervously Coming Out of the Closet

While I’m excited that Tammy comes home today, I’m also very nervous and anxious because I did something she might not like.

No, I didn’t got out and buy one of those new, super thin TVs or new video games. In fact, I didn’t even buy anything for me, but that doesn’t mean Tammy won’t be upset.

I decided to be productive around the house while she was gone. For those of you that don’t know me, that doesn’t always work out so well.

When Ashlee moved out of the house a few years ago her room became Tammy’s personal walk-in closet.

But over time the room began losing most of the walk-in part as more and more of Tammy’s stuff found its way in. 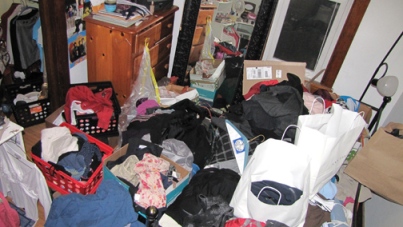 When Savannah was little I wouldn’t let her go into Ashlee’s room, which I dubbed the “Death Trap,” because I was afraid she would try to eat something off the floor and choke on it.

I don’t have the same fears about Savannah going into the room anymore but it’s mainly because she couldn’t walk in very far due to all of the boxes and clothes everywhere.

I’ve told Tammy that if she’d get everything off what’s left of the daybed (frame and box-springs, no mattress) that I’d put together a set of cubes I bought last year (2010), but that never happened.

Is That Really A Good Idea?

I’ve offered to help Tammy with her room in the past but she’d usually ask at the worst times, like when something I liked was on TV, so I gave up on trying to make over her room.

I just figured that if she’s OK with it then I’ll be OK with and leave it at that.

Tammy had asked for some closet organization stuff for Christmas and I had been checking different options out when I got the bright idea to go all DYI on her room. Again, for those of you that don’t know me, click the link in the third paragraph.

The idea hit me as Jake and I were watching Monday Night Football, not long before Grace showed up with cookies, and I started by simply moving as much of her stuff out of the room as I could.

My goal was to get to where I could take the daybed apart, but just getting to the daybed proved more difficult than I thought.

It wasn’t long before I was questioning my decision about this project. My body was telling me I could be spending the next four days sitting in my recliner watching MY shows on the DVR but my brain and heart kept saying to push forward.

By the end of Monday night I had enough stuff moved so I could get to the daybed which I took apart on Tuesday. 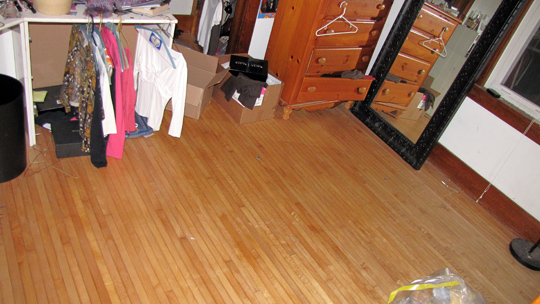 Ohhhh, I had forgotten what the floor looked like.

A Mountain from a Molehill

I also took Tuesday night to put together the cube thing I got for Tammy last year and move it into the room.

That’s when I realized a whole lot more needed to be done.

Wednesday night (Night 3 without Tammy) was spent sorting through all of the clothes. I had piles of blouses, jackets, pants/slacks, t-shirts, skirts and sweaters.

And, I know this is hard to believe, but I actually found a few more pairs of panties which I think pushes Tammy’s total around the 90-pair mark.

The Call of the Sam’s Club

I had to find a solution for this problem I had created because Tammy would be home Friday.

I had been looking at a few of those “rolling” closets for her because she didn’t have any more room in her closet to put the insane amount of clothes I had sorted.

So on my way home Thursday night I stopped at Target and picked up a rolling closet, even though I knew it wasn’t going to be anywhere close to being big enough.

As I left Target something told me to poke my head into the nearby Sam’s Club to see if they had anything.

I stood there staring at it for what seemed like forever debating if I should get it. I started to walk away from it but decided that what they had was WAY better than what I just got at Target.

So for the second time in less than 10 days I left Sam’s Club with only one item. Only this time I didn’t get out of there for under $10 or $100, but I think it was worth it. 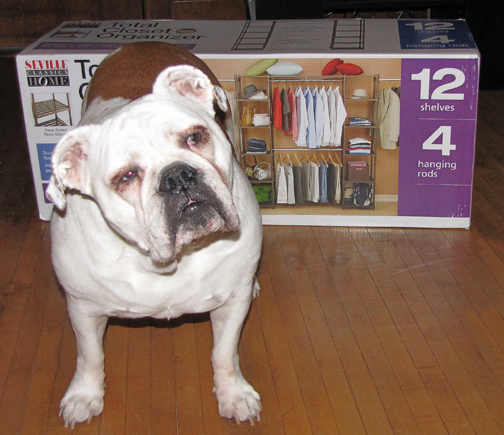 Savannah didn’t want me taking a picture of the Total Closet Organizer.

What a Mötley Crüe 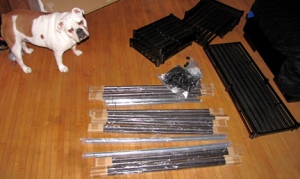 I was so excited about what I had bought that it didn’t really dawn on me that I had just created even more work for myself.

I sat on the living room floor pulling pieces out, all under Savannah’s watchful eyes, and started looking for something to watch on TV.

I found a Mötley Crüe: Carnival of Sins on the Palladia channel. I had seen it before and figured it would be the perfect background music for this project.

But then Home, Sweet, Home came on and I got sad because even though I was doing all of this FOR Tammy, I was still missing her and ready for her to come home.

That’s when I looked over and realized Savannah didn’t approve of my rendition. 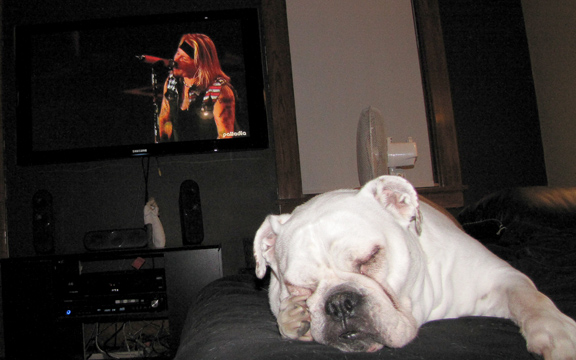 Starting to Come Together 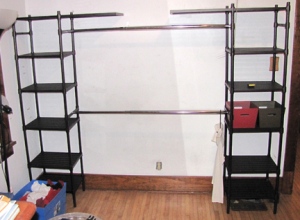 So far, so good. But will it hold all of the clothes?

So I turned it down, stopped singing (so loud) and got back to the task at hand.

The first side-tower attempt wasn’t very smooth. I put the brackets on upside down and the shelf wasn’t level but after a few adjustments things started to fall into place.

The second tower went much quicker and when it was finished I moved it into Tammy’s room to put the finishing touches on. 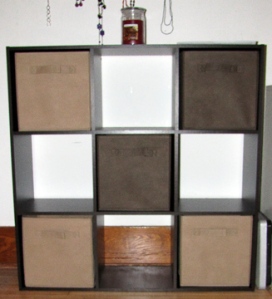 Next up was tackling all of the clothes I had sorted and getting as much as I could on hangers.

Tammy called me during this stage which was perfect because I was able to make progress while still talking to her and she was none the wiser.

I even filled some of the baskets for The Cube and put it into place.

I wasn’t able to get a hanger to EVERYTHING, but I made enough of a dent to where I felt like I could start wrapping up for the night. 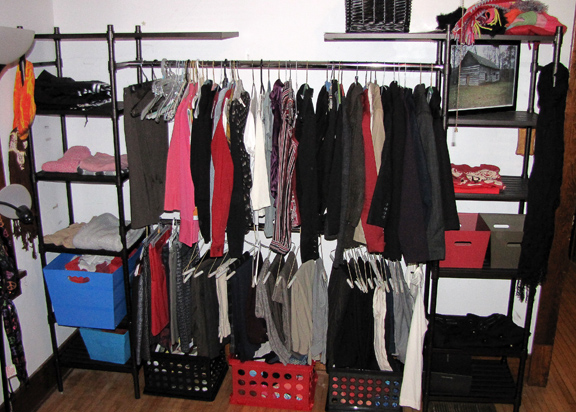 Not complete but good enough.

And Now, The End is Near

So now all of the physical hard work is done and up next is The Reveal.

Tammy literally just texted me (2:27 p.m.) to let me know they have boarded the plane and she’ll be home soon.

Her flight doesn’t get in until 5:45 and I’m already starting to get nervous.

She’s never mentioned getting one of those closet organizers and normally doesn’t like it when I go into her room.

Recently I went in to see if I could hook up a TV in there and she started peppering me with questions and kept watching me until I finished.

Tammy: Hey! What are you doing in there?
Me: I’m trying to see if I can get the TV to work in here.

Just to be safe, I didn’t throw anything away from her room and I kept all of the receipts for the stuff I bought.

I’ve closed the door to her room so she can’t see it right away. I’m hoping I can get home before her (we have to stop and get her car) so I can put a camera in there to capture her reaction.

Until then I’ll be a nervous wreck.

P.S.  We are going out to dinner after her flight so if you know Tammy and read this , PLEASE DO NOT say anything about it. It may be as late as 8:30-9 p.m. CST before it’s where she can see it.

* This is picture is somewhat staged. I had taken several boxes out of the room when I realized I should have taken a “before” picture so I put them back. They aren’t in the exact location, but close enough.

8 Responses to Nervously Coming Out of the Closet