Last night while semi-decorating the house and waiting for Tammy to get home from shopping, I decided to watch a movie.

For those of you that don’t know, Movies and Me Don’t Mix unless certain demands are met. Last night’s movie choice fell into multiple categories, including one that exceeded my expectations.

All of the Elements Are In Place 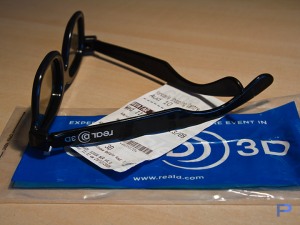 If it's Real 3D then you need these.

I didn’t really know if he had seen it in 3D, but I figured he’d seen something because a pair of Real 3D glasses appeared in our house and were sitting in front of my computer.

His ringing endorsement plus the flesh-eating fish invasion (Action/Scary) of a Spring Break destination (girls in bikinis = hints of nudity) was all I needed to make my decision.

Is It Time to Eat Yet?

Tammy came home a few minutes after I had started the movie.

I listened as she told me what all she bought, all while taking peeks at the movie so I wouldn’t miss anything.

It didn’t take long for the movie to build up the suspense as hoards of college kids were partying on boats in the same lake the piranha had invaded.

While Tammy was talking I kept thinking “somebody’s bout to get eated.”

Then they cut to a scene where the “Girls Gone Wild” movie-man character, played by Jerry O’Connell, had taken his boat, along with three ready-to-party-females, out to a peaceful spot on the lake.

The girls start doing body shots off each other and dancing all while O’Connell watches and films.

The girls then jumped into the water (somebody’s bout to get eated!).

The next thing I knew two of the girls took their tops off and threw them on the boat (somebody’s bout to get eated!).

The next thing I knew their bottoms were flying through the air as well (somebody’s got nekkid!).

Who Says the Ballet Is Boring?

I heard what only can be described as angels singing as the two girls dove underwater and started playing a game of nekkid grab-ass.

I grabbed the 3D glasses, threw them on and headed toward the TV.

I stood a few feet from the screen as I watched in amazement at what I later learned was called the “Underwater Ballet.”

O’Connell excitedly filmed as the girls swam beneath the glass bottom of the boat.

Because I was taken aback by the pure beauty of the ballet it took me a few second to snap to reality.

Me: They sure can hold their breath for a long time.
Jake: They have extra oxygen because they have fake boobs.
Me: Ahhh, that makes sense.

Underwater or Above Water, Doesn’t Matter to Me

When the dancing was over, I took off the glasses and kept watching, just not so close to the TV.

It wasn’t long before I was reaching for those glasses and found my spot in front of the TV again. But this time it wasn’t for what was happening underwater.

Instead it was because of the “Flying Ta-Ta’s.”

Some poor girl’s bikini couldn’t stay on while she was parasailing. The boat operators were enjoying her performance while dipping her in the water when the piranha attacked. By the time they pulled her out of the water she was only half the woman she used to be.

The scene shifted to the party-side of the lake where a wet t-shirt contest was going on. Fortunately I had the glasses on for that too.

I don’t remember how many 3D boobs I saw during the movie. I just know they were in multiples of two.

But that’s where the fun times ended.

The piranha descended on the party area and the lake suddenly looked like a giant bowl of Hawaiian Punch.

That’s when the action/scary part of the movie kicked in as people were getting eated left and right.

And the Winner Is…

Normally when I hear that a movie has won an award it means I have no interest in watching it.

But as I was trying to find images from the movie for this post, I found out that the very Piranha movie I watched had won two prestigious awards.

It brought home the Best Nude Parasailing award as well as the 2011 Breast Picture in Mr. Skin’s Anatomy Awards.

As the movie was winding down I looked over at Tammy who was sitting at the kitchen table looking over what all she had just bought.

Me: I see why Jake liked this movie.
Tammy: Yeah, you think.
Me: And I see what he meant when he said he’d like it if it wasn’t in 3D.
Tammy: I guess so considering we don’t have a 3D TV.

She didn’t have the glasses on and doesn’t know what she was missing.