Normally heading down to Mississippi is something I get excited about and look forward to, but recently those trips haven’t been much fun.

When I first moved up to Chicagoland, I was able to get down to visit my family more often for “fun,” thanks to the 20 paid days off and 12 holidays where I worked.

As I moved to different jobs the pay went up but the days off went down which meant we made it down South less. We weren’t able make it down there every year and when we did go it wasn’t always under the best circumstances.

In 2005 we headed down for Pop’s (grandfather) funeral. We went down in 2008 when my other grandfather died suddenly. We’ve been down there two more times, including last year, so that meant there was a 50-50 chance of the trip being for fun or sad reasons.

Those odds have since changed, but not for the better.

Friday I found out that one of my closest friends, who I’ve known since 4th grade, lost his father.

My friend texted me Friday morning saying he was heading to Tupelo because his Dad, who had been battling various illnesses over the past 2 years, was in the hospital again. An hour later, to the minute, he let me know his father had passed.

I immediately was overcome with sadness and called Tammy to tell her I felt like I needed to go down for the funeral.

She understood because she knew how close of friends the two of us had been over the years.

Years In The Making

Cruising for chicks in the RATT-mobile.

I’m horrible at math so I don’t know the number of years we’ve been friends, I just know it started around the 4th grade.

We went to different schools until 7th grade but as the years went by we became good friends. We’d cruise the streets of Tupelo in his Nissan Pulsar (hatchback) with his 6 x 9 speakers blaring 80s hairband music. My friend was particularly fond of the band Ratt.

I guess it’s no wonder we never really picked up any chicks when we went cruising, but we still had nuthin’ but a good time.

During this trip, my Dad told me a story about a time he got a phone call from my friend’s father around 2 a.m.

Apparently my friend didn’t tell his parents he was sleeping over at my house and they were a little freaked out. My Dad found my friend sleeping on the couch and his parents decided to “take care of it in the morning.”

Back in 1986 we went to see Mötley Crüe when they came to Jackson, Mississippi, which was four hours away. I remember my Mom saying she didn’t care if I went but I was NOT going to miss school the next day. Back then it was cool to go to school the next day wearing a t-shirt from the concert, but that was before they started selling them for $40+.

Another friend’s Dad went with us and sat reading a book during the concert. It was so thick that I think it may have been War and Peace.  To help block out the noise he put cigarette butts in his ears. 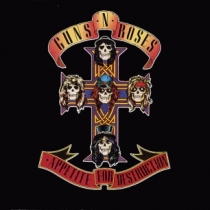 Welcome to the jungle baby...

We didn’t protect our ears and screamed to the top of our lungs to every song the Crüe belted out. We didn’t know who the opening act was but thought they were pretty cool.

Turns out it was Guns N’ Roses. The same GnR my friend and I were listening to on a church trip right after Appetite for Destruction, came out.

We spent the whole trip listening to the tape (that’s right I said tape, as in cassette tape), learning the words and singing along, much to the dismay of some of the chaperone’s on the trip.

After high school we went our separate ways but we remained close friends. We made multiple trips to visit each other at our respective colleges, but I’m not going to write about any of those experiences. hehe…

During the 12+ years I’ve been in Illinois, there have been times where more than a year would go by before I was able to see my family. But I don’t know that I could say that about my friend.

Tammy and I went down to see him get married and they would come up to Chicagoland to go to concerts and a couple of Country Thunders. When he changed jobs and moved from southern Illinois to Arkansas, we made a point to make it down to visit them.

We even spent some of our vacation last year with them. To read about those times you can check out Day 3–5 of the 2011 Travel Logs.

I’ve known for years that we had a special connection and was even telling people about it back in college.

In my Fraternity the pledges had to interview all of the brothers and the last question they had to ask each of us was “What is true brotherhood?” My answer was always the same.

Me: True brotherhood isn’t something you just find in a Fraternity. I’ve got a friend that goes to school in Mississippi, but I know if I called him right now he’d be here for me and I’d be there for him.

It came from the heart each and every time I said that because I meant it and I still do.

Because of how much we had been through over the past 30+ years, there wasn’t any doubt in my mind that I wanted to be there for my friend during this time.

Sometimes we go through life at such a fast pace that people and friendships left behind. Fortunately we didn’t leave each other behind.