Noah may have been the first, but he’s not the only one who knows how to survive a flood.

Thankfully we didn’t need an ark. 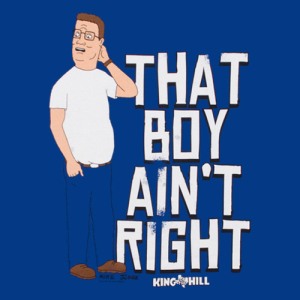 We had watched Baby G on Saturday and after he was picked up I headed out to the local farm & lawn store to get some food for Savannah and to the grocery store for a few items.

When I left Jake was in the shower and Tammy was on the couch playing with her laptop while watching one of her shows on TV.

All was quiet on the western front.

But by the time I got back home about 30 minutes later things had changed…for the worse.

Getting Jiggle With It 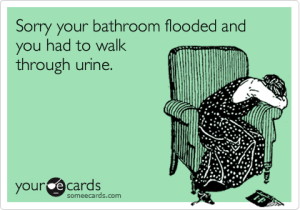 At least it wasn't pee water.

I could hear the toilet running as soon as I walked into the bathroom and thought a simple jiggle of the handle would fix it.

It wasn’t until I saw the rugs on the floor were a darker shade of green than usual that I realized this was going to be much bigger than a jiggle.

There was water over the floor and I figured The Boy (aka Jake) had clogged the toilet (again). I lifted the toilet seat expecting to find murky water or a softball-size wade of toilet paper struggling to go down and was pleasantly surprised to find a clean, but filled-to-the-rim bowl.

I turned the water off, grabbed the plunger and shoved it in the bowl which caused even more water to spill on the floor.

I grabbed all of the towels from the closet, the towels that had just been washed 3 days earlier, and threw them on the floor to soak up the water.

Because of the amount of water that had been on the floor, I ran down to the basement to see if anything was leaking through the ceiling.

When It Rains, It Pours 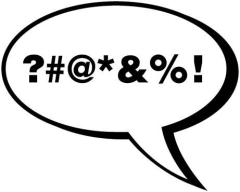 There was a steady stream of water coming from the ceiling and landing on the futon mattress. I could still hear what sounded like running water so I ran back up to make sure I had turned the water off in the bathroom.

What I was hearing was the rest of the water that was making its way to whatever opening it could find.

What followed next was an obscenity-laced tirade as I scrambled to stop the leaking. I grabbed the blanket on the futon and threw it outside on the patio. The futon mattress soon followed.

Laughing in the Face of Danger

I grabbed the shop vac from the garage and told Tammy I needed some help.

I stuck my head into the ceiling to see how bad the damage was and told Tammy it wasn’t good.

I started vacuuming up the water as best I could while Tammy started putting down towels on the floor.

I had run two extension cords across the floor, one for the shop vac and another for a fan I set up to help dry things out. 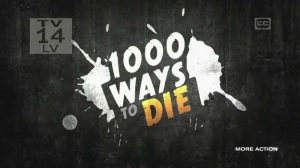 The cord to the fan just happened to cross over where Tammy was still trying to get water up, something she wasn’t very comfortable with.

Tammy: Seriously? Does this have to be here?
Me: Well, yeah… It’s plugged into the fan.
Tammy: There’s water on the floor and you’ve got all this electric stuff right here. What are you trying to get me on an episode of “1,000 Ways to Die?”
Me: No, but that’d be funny.
Tammy: Oh, it’d be funny if I died?
Me: Of course not. But it’d be a funny story. (in narrator voice) The son left for work not knowing he had clogged the toilet, causing water to spill on the floor and leak into the basement. His Mother and Step-Father started to clean up the mess in the basement. While trying to dry the carpet his Mother came in contact with the extension cord the Step-Father had put down. The electricity running through the cord coupled with the water on the floor from her son’s clogged toilet caused a reaction…

I didn’t finish because we both were laughing.

But as the clean-up effort stretched toward the two-hour mark that laughter was a thing of the past.

Tammy: Jake’s not even coming home. He’s out doing stuff and I’m cleaning up his sh!t-water.

The “sh!t-water” wasn’t just coming out above the futon. It had found its way into the room with the furnace and hot-water heater as well as the laundry room.

It was leaking from a vent in the ceiling and from places I could barely get my hand into. It turned into a two-person, FEMA-type cleanup that not only exhausted us but nearly all of the towels in the house.

Savannah wasn’t sure what was happening in the basement. All she knew is one of her beds (the futon) and its blanket were outside on the patio.

At some point I let her outside and when I went back to check on her a little while later, I found her enjoying the new setup. 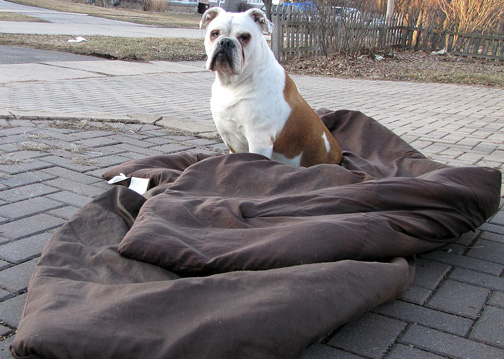 Three rolls of toilet paper lost their lives during the flood.

But these weren’t just any rolls, these were the Rolls Royce of butt-wipe and we are still feeling their loss. Charmin Ultra Strong Giant Rolls don’t grow on trees.

They may be gone, but they will not be forgotten.

4 Responses to How We Survived the Flood of 2012