I’m always surprising Tammy by the stuff I put into my body, but today I even surprised myself.

During my not-so-successful couponing attempt I picked up something called Yakisoba, which means “fried noodle.”

I got two flavors (chicken and teriyaki) because I had a 50¢ off coupon that made the final price only 28¢ and because they looked like Ramen noodles on steroids.

I loved Ramen noodles in college and since the Yakisoba were in a fancy package they had to be better than the cheap stuff I was accustomed to.

I ripped off the package and read the directions before throwing it into the microwave. 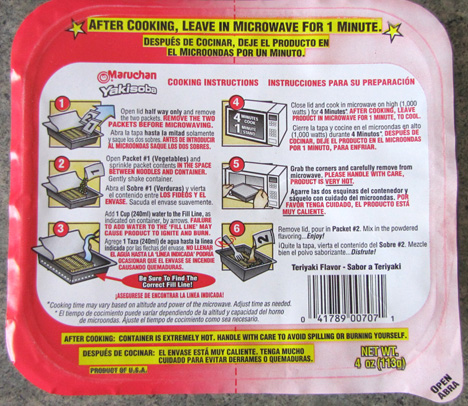 I was a little taken aback at how many directions there were but just figured that was because it was going to taste so much better and didn’t think much about it.

I put in the necessary water and had popped it into the microwave when my brain finally realized what instruction #3 has said.

Not only is it so important that it’s in red, but just to make sure no one misses it they put it in ALL CAPS too.

FAILURE TO ADD WATER TO THE ‘FILL LINE’ MAY CAUSE PRODUCT TO IGNITE AND BURN.

I pulled the package out of the microwave and just stared at it on the counter not really understanding why or how the not having enough water would cause it to “ignite and burn.”

I decided that since it hadn’t ignited already then it would prolly be OK to eat.

I had the teriyaki flavor and I was right about it being high-class Ramen noodles because they tasted a LOT better than what I had in college.

I just hope I don’t fart and set my pants on fire.