There Goes the Neighborhood

When I initially though about doing a Flashback Friday, I did it with the intention of telling stories from my childhood, teen and college years.

This story doesn’t fit into any of those categories. In fact this story isn’t even something I was apart of, other than having it told to me.

But I’ve known the person (Opie) who told me the story for nearly 12 years and he’s not the kind to make stuff up. Besides, who could make this up?

It looks so innocent...

The story starts with a guy mowing his front lawn with an electric lawn mower. It was the kind that needed to be plugged in which meant there was a cord to be managed.

At some point the cord was entangled so the guy starts pulling on it so he could continue mowing.

Apparently he yanked it harder than necessary.

He had turned to find what was hanging things up when he heard was the auto-recoil on the lawn mower whizzing.

It didn’t take long for two things to hit him.

First, he realized he pulled the cord out of the wall and it was snaking its way back to the lawn mower.

The second thing to hit him was the end of the cord.

When You Gotta Go…

He had watched the end of the cord bouncing around as it sped back to the lawn mower and was too mesmerized by it to think about moving.

The last thing the end of the cord hit caused it to bounce up and hit him square in the balls.

What happened next may be hard to believe for some of the women reading this, but I think it’s safe to say that most of the men out there will be able to relate.

His knees clamped together as he grabbed his crotch and doubled over as he could feel the pain shooting into his abdomen.

It only took a second to recognize that the feeling in his stomach had bad intentions.

He briefly thought about trying to make it to the house but quickly realized there wasn’t time for that.

He was doing a modified Pee Pee Dance as he fumbled with this belt. Once he had it unbuckled, he unzipped his shorts, squatted down and pooped… in his front yard. 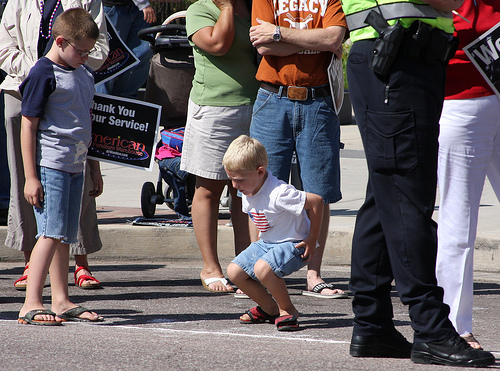 Kinda like this, except a grown man in your neighbor's front yard.

When Opie was telling me this story I couldn’t stop laughing because I knew that feeling, although it was never poop-in-my-front-yard bad.

I was laughing because I was thinking about it from the perspective of people who may have been driving through the neighborhood. 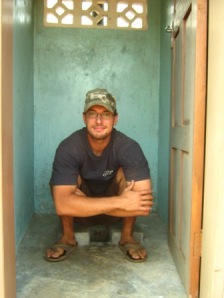 Imagine seeing this (minus the walls) happening in your neighbor’s lawn.

Husband: You know I really like this neighborhood. I could see us raising our kids here.
Wife: I totally agree. We definitely would fit in here.
Husband: What’s that guy doing over there?
Wife: Maybe he got stung by a bee or something.
Husband: What the….
Wife: Eeeewww…

I still laugh when I think about it as well as when I see someone mowing their lawn.

Now, for the record I want to say that just because someone gets hit in the balls doesn’t mean they are gonna crap themselves. But the men out there know the feeling and that it’s not big leap to get to the pooping stage.

Of course I told this story to Tammy and she thought it was funny but, unfortunately for me, she’d like to see it in action.

Tammy: (after thumping me in the beans) You gotta doo-doo?

5 Responses to There Goes the Neighborhood