Shoes, Shopping and a Super-Couponer

When I asked Tammy to meet me to check out a new store in town for a little clothes shopping, I didn’t think it was going to turn into a big ordeal. Boy was I wrong.

We had never been to the Sears Apparel Outlet in town and since I had printed out two coupons for “One Free Apparel Item” from a couponing site, I thought it’d be fun to check it out. But getting Tammy there was problematic.

Off on the Wrong Foot

Whore Heels: Good for work, not so good for shopping.

First, Tammy said she didn’t have the right shoes to go shopping. She’d worn “Whore Heels” to work and didn’t like the thought of shopping in them.

Tammy: Well, I don’t have shoes on to really shop….so I’d rather not go, unless something is great.
Me: Oh come on. Are you kidding me? I’ll bring you some dang shoes.
Tammy: Seriously, my shoes hurt in 2 secs.

She finally gave in and agreed to meet me which meant I had to get some shoe options together.

I ran to her the closet I helped put together at Christmas and grabbed an armful of shoes that I thought would match what Tammy wore to work.

I was a little surprised that she didn’t like my choices.

Tammy: Seriously? Out of all of the pairs of shoes I have you brought THOSE five pairs? Why would you even bring me these? (holding up a pair of brown furry Crocs)
Me: ’cause I thought you might want to wear them. Plus, they are brown and match what you’re wearing.
Tammy: No.
Me: What about these? They’re black.
Tammy: They are Sketchers you idiot!

She eventually settled on a choice and we headed inside.

Was That Out Loud?

She acted like she wasn’t interested when walked in but it didn’t take long for her to immerse herself in the rows and rows of clothes.

I wandered off to look and some man stuff but saw her walking toward me with a weird look on her face.

Tammy: Number 1, I farted out loud and Number 2, I think I found some jeans I wore in high school.
Me: You farted out loud.
Tammy: Yeah. I didn’t think it was gonna make noise but I was wrong.

Well Where IS There Fat?

Tammy found a pair of pants with a slit down the outside of each leg that was connected my little loops of fabric. I told her she should get them to wear to the KISS/Motley Crüe concert in September, but she didn’t like the idea.

Tammy: Just what I need is more fat to be squishing through.
Me: It won’t squish through. You don’t have any fat on your legs. (laughing) Or on the rest of your body for that matter.
Tammy: (glaring at me) What fat do I have Jason?
Me: I corrected that statement before you had a chance.
Tammy: Laughing isn’t a correction.

Grace Is Upon Us

Grace texted me to say she was coming to the house but Tammy told me to invite her to come shop with us..

Tammy picked up a sweatshirt that looked like a toy soldiers and was debating on whether or not she should get it.

Tammy: Doesn’t this look like a soldier?
Me: What are you gonna wear it with?
Tammy: I know, right? I’m staring to get sucked in.
Me: What?
Tammy: Sucked into the trash. You know, because I’ve been around this stuff for so long that I’m starting to think trashy stuff looks good.

Around this time Grace came in so Tammy asked what Grace thought of the item. Grace just scrunched up her nose.

Tammy put the item back on the rack.

For the record, the store was NOT trashy. There were a TON of good deals in the store. They had a men’s Levi’s 501 jeans for $17, which I know is a good deal. And from the amount of time we spent in the store I think Tammy liked it too.

It’s A Once in a Lifetime Opportunity 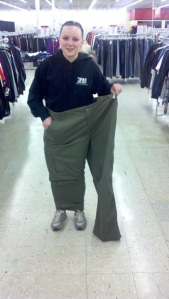 Grace filling out her pants…

When I was checking out the clearance section I found something that I thought Grace would enjoy. I just didn’t realize how much she would enjoy it.

Me: I found a pair of 52 size pants earlier.
Grace: Where?

She was so excited that she pulled them off the hanger and put them on… in the store.

Jake: (who arrived shortly after Grace) What are you Jared from Subway?
Me: That’s what it looks like.

She then began “selling” us on getting the pants.

Grace: We gotta buy this, we gotta. It’s an additional 75% off of 13 bucks. We gotta do it.
Me: (laughing) We gotta do it?
Grace: You only see these like once in your life!
Me: You could make a skirt out of it. You and Cartwheel Kate could wear them together.
Grace: Yeaaahhh… Do the math. Seventy-five percent off $13 is like, what? Three?

I pulled out my calculator and ran the numbers.

Turns out Grace talked Tammy into getting into the pants with her and they became The Penguin Girls (click to see the video of them).

Jake even decided to get into the fun.

The Penguin Girls… and Savannah 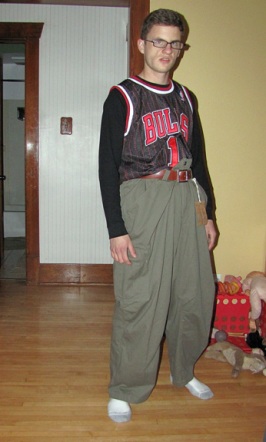 Savannah even got in on the Big Pant action.

As we neared the front of the store Tammy found another section to explore. 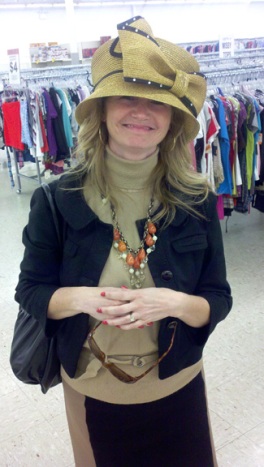 Just in time for the Kentucky Derby.

Maybe this one instead?

My Almost Brush with Greatness

During one of my trips to the front of the store to check on Savannah, who was waiting patiently in my car, I passed someone who looked familiar.

I found out later last night that it WAS Jill, the lady whose site I got the free coupons from. She had posted an article about her haul from Sears Outlet on Tuesday. She had gone back to the store with her daughter and was sitting by the TV in the kids area while she shopped.

I thought about yelling out, “Hey Jill!” and looking around like I was trying to find who said it but figured I prolly didn’t need to do that.

I couldn’t believe that I was IN the same store as The Super-Coupon Queen. It made it worse that I thought it was her but didn’t say anything.

I tried to relate it to something Tammy would understand.

Me: She’s famous.
Tammy: How?
Me: She’s been on the radio and TV a lot. (Jill’s bio)
Tammy: Has she been on that show Extreme Couponing?
Me: No, but the people on those shows aren’t famous. She’s like the Peyton Manning of couponing.

That last statement didn’t sit too well with Tammy. For those of you that don’t know about Tammy’s love of all things Peyton click here, here, and here.

Tammy: I never thought I’d have to compete with…
Me: The Super-Coupon Queen?

But I still think it was pretty cool that I was in the same store as the Super-Coupon Queen… and that we got some giant-ass pants.

9 Responses to Shoes, Shopping and a Super-Couponer