My No Crap Contract

One Saturday a month for the past year and half, Tammy and I have kept our nephew, Gavin, as part of a babysitting rotation. 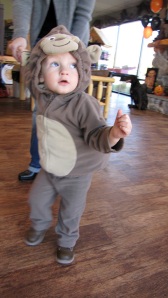 Monkey went dressed as a monkey for Halloween.

When our “time of the month” rolls around I usually say something like, “What?! Already?!?”, “Oh no, not again,” or “We’ve got ‘That Boy’ again this weekend?” but Tammy knows I’m kidding and love spending time with Baby G, also known as Monkey.

As Monkey has gotten older I’ve started having more fun with him because he’s becoming not so  “breakable” anymore. I don’t like holding freshly hatched babies because I’m always afraid their heads will fall off, I’ll pull their arms out of socket or any other horrible possibilities.

A perfect example of how I don’t like holding babies was when Baby G was younger.

She handed him over to me and headed to the kitchen for what seemed like an eternity. Seriously.

When she returned, she took Gavin back and looked at me.

Tammy: Did he pee?
Me: I dunno. Why?
Tammy: Because he’s wet.
Me: That’s my sweat.
Tammy: What?
Me: Yeah. I was sweating like crazy cause I had to hold him. His head was bobbing around so much I thought it was gonna fall off.

She checked my shirt and couldn’t believe I had gotten so nervous that I had sweated through it.

Now that he’s older I don’t worry about those things and look forward getting in the floor to play with our Jeeps, basketballs or anything else his short-attention spanned head can imagine.

I even went out garage sale shopping last week and picked up a few Tonka toys for him, not the metal kind though because he’s not quite ready for those yet.

I even picked up a “bucket” so we don’t have to swap cars with Tammy’s sister when it’s our weekend (bucket = car seat). The weekend before, we picked up a “wagon” and a high-chair that we could have used a few months ago when Tammy made Gavin sit in her Homemade Hillbilly High Chair (wagon = stroller).

The bucket is sitting in the backseat of my car waiting to be strapped in for Monkey’s arrival this Saturday. And it has to be ready. It HAS to be…

The reason is because Tammy has a work function this Saturday morning, which means I’m going to be left alone with Gavin for a few hours.

I know, right? I can already feel myself sweating through my shirt.

But if the bucket’s in place I can throw him in it and we can ride around for an hour or so and maybe it won’t be that bad.

It’s not the being alone with Gavin that scares me so much because he’s at the age where I don’t have to mix bottles and can just throw down some Cheerios, turkey and cheese and he’ll be happy… for about 3 minutes.

I’m also pretty confident that I can keep him distracted with enough shiny stuff over the remaining couple of hours.

What I’m afraid of is if/when the sh!t hits the fan or should I say his diaper.

I don’t have kids of my own and while I’ve got three nephews I have NEVER changed a diaper. The one time my oldest nephew crapped himself, I turned the water hose on him. Literally.

We were swimming and he couldn’t get inside in time before he had an accident. I made him stand by the fence, turned on the hose and cleaned him off. But he was a LOT older than Gavin.

Gavin won’t give me any warning before he unloads and it’s that uncertainty that has me worried.

I’ve told Tammy, her sister, their Mom and even Jake’s girlfriend that if Gavin blows a gasket then they might see me on Saturday.

There’s another option on the table, one which I prefer, but it hasn’t been approved by Gavin’s Mom as of yet. But I’m sure she won’t have any problem signing the No Crap Contract I sent over that promises Baby G will be poop free during his time with me on Saturday.

18 Responses to My No Crap Contract