It’s very rare when the worse possible scenario doesn’t happen to me so I’ve developed the  attitude of always preparing for the worst.

So it was no surprise that I worked myself up stressing about having to keep my nephew, Gavin, by myself for a few hours on Saturday, even going so far as requesting a No Crap Contract.

My garage sale find to help distract “That Boy.”

I had gone out to a few garage sales the Friday before to try and find anything I thought might help keep little Gavin distracted enough to not crap himself.

Friday night before I went to bed I made sure to set out all of the toys for Gavin so I would have one less thing to worry about Saturday morning.

What Gavin saw when he came over.

I got up early Saturday morning so I could get a cup of coffee in me and so I could make sure Tammy got out of the door for her early morning work breakfast before Gavin arrived. Gavin loves his Tammy and the last thing I wanted was to have him see her then start crying when she left. 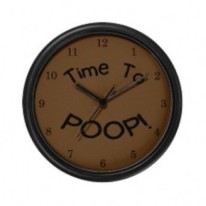 I went out to meet Kristan in the driveway and when she opened the door it looked like Gavin was still sleeping. I brought him in and talked with Kristan a few minutes before she headed off to work.

I tried to ignore it and made some waffles for Gavin and me to have for breakfast.

We made it through breakfast, which included syrup for Gavin to dip his waffles into, with no mess.

Once I got everything cleaned up when headed to the awaiting toy land in the floor.

Gavin loved the little farm I picked up for him. We went through and named all of the animals. He knew the horse, cow, chicken and dog. But my favorite was when he kept calling the pigs, “Oink, Oinks.”

Savannah helped Gavin go through all of the farm animals.

We played and played. 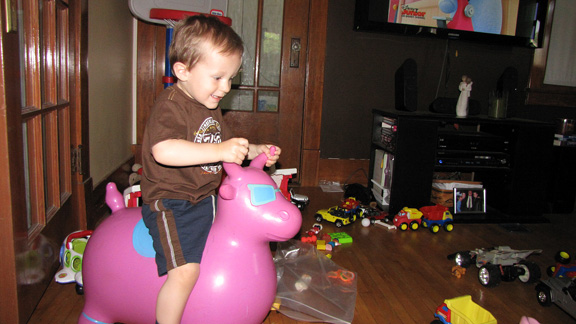 Gavin tried to get Savannah to play football. She wasn’t interested.

We played with the “Jeeps, jeeps, jeeps,” the Tonka trucks, babies and almost every toy we had in his box. The entire floor was covered with fun.

Who made this mess Uncle J? 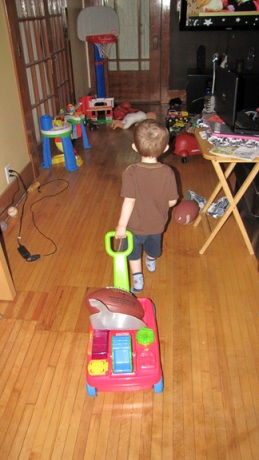 Holy crap, is that an effalant? 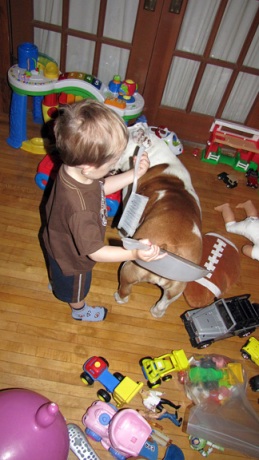 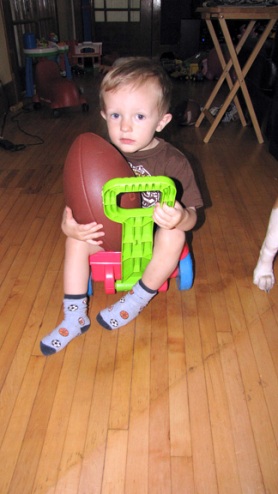 Seriously? Stop taking my picture and pull me!!

We eventually made it down to the basement where Gavin wanted to play with my football men.

Ooooh, look at this one. 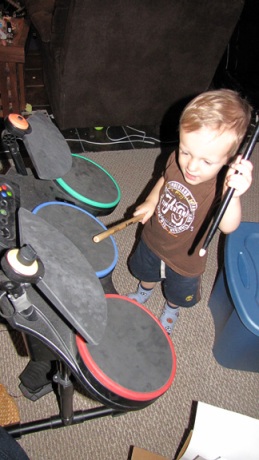 We played the drums.

We rested up a little…

At this point in the day I had almost forgotten about the ticking Poop Clock but fortunately Grace was on her way over which meant I would at least have help should Gavin blow.

Tammy showed up a little while later and checked his diaper. He had peed a little, but we were still poop free so off we went to play so more.

Then Jake wanted to play basketball.

We headed outside to play basketball with Jake.

After basketball Gavin donned a hat and began playing in the yard.

The prollem is this rock right here.

Gavin then started drinking. He picked up that habit from his Aunt Tammy.

All you gotta do is put a drank in my hand… 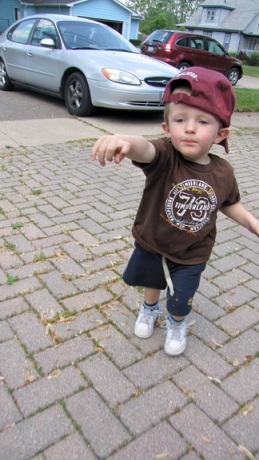 Ima buss you up if you keep taking my picture!!

Tammy and I took Gavin for a stroll around the block and waited for his Dad, also named Jason, to come pick him up.

We were watching his “Ernie” (aka Sesame Street video) for the 15th time when Jason walked in. We packed up Gavin and they headed home around 2 p.m.

At 3:42 p.m. I found out that some people out there had plotted against me and were trying to make sure my solo babysitting stint was going to be filled with “fun,” when Gavin’s grandfather, Jack, posted this on Facebook.

Today, Jason, Gavin’s uncle, did a solo babysitting stint. He was really worried about handling things that toddlers do, like poop. He blogged about his anxiety. So, last night out for dinner with Kristan and Gavin, Roseanna, (Jack’s wife) fed Gavin red beans. Jason survived so now I’m waiting on (my) Jason to call and complain.

At 6:08 p.m. I got a text message from Jason that read, “You guys dodged a nasty bullet,” that was attached with THIS picture. (Warning, not for the faint of heart.)

I honestly don’t know what I would have done if THAT had happened on my watch.

All I know is that I’m no longer friends with Roseanna and that I must be living right.

6 Responses to A Poop Free Saturday?