In planning out the route for our trip to Mrytle Beach, which will include a stop to visit our daughter Ashlee and her boyfriend Billy, I knew it was going to take about 15 hours to get to Spring Lake, North Carolina, where they live.

I also knew that driving for 15 hours isn’t something Tammy would be OK with and started trying to find places where we could spend the night. I originally settled on Charleston, West Virginia, because it was only 10 hours away.

But after talking with Tammy about everything I decided to try and make it to Winston-Salem, NC, which was roughly 13 hours away. My selling point was that we’d only have about 2 hours to drive to get to Ashlee Sunday morning. I also added that meant we needed to leave the house by 7 a.m., something that I knew would be difficult.

I woke her up and she immediately went and got in our bed and started getting comfortable when I lit into her.

Me: What are you doing?
Tammy: I hardly slept last night. I’m just gonna sleep a little.
Me: We need to be on the road by 7 in order to get to Winston-Salem and to Ashlee early Sunday.
Tammy: I’ll just be a few minutes.
Me: Ok fine. I’m just trying to get there early for you.
Tammy: Fiiiinne.

I waited for the storm to subside and finished packing the car. Savannah knew something was up and followed me outside almost every single time. 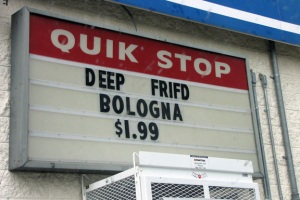 I had told myself that I wasn’t going to harass Tammy and that when we left was up to her. For those of you that know me, or more importantly know Tammy, you can imagine my surprise when we pulled out of our driveway at 7:15 a.m. I actually think that might be a record for us.

We stopped by Dunkin Donuts for breakfast and Tammy wasn’t too happy that I was making her go inside because the drive-thru was too long.

Tammy: I don’t want to go in like this.
Me: Why? It’s not like you’re gonna see anyone you know.
Tammy: I know a lot of people.

We went inside and when Tammy ordered I commented that I was surprised she didn’t her favorite, an apple fritter.

Tammy: Does this look like a “fritter body” to you? No. I gotta have a beach body.

When we walked outside I asked her if she knew anybody in there.

Tammy: I might have. I just didn’t acknowledge them.

Then she looked down at the ground and confessed.

At some point on the trip I was listening to Eric Church’s new album when a song called, “Like Jesus Does” came on and Tammy started rubbing me on my back which caused me to look at her.

Tammy: I thought you were crying because you were thinking I love you like that.
Me: I wasn’t. I was just sniffling.
Tammy: Then I take it back.

Say It, Don’t Spray It

When we saw a sign for a town called Lispon Tammy turned to me and let me know how she thought the town’s name sounded.

Tammy: Listhpon. (saying it with a lisp)

Of course I joined in on the fun.

Out of State But Still In Her Mind

As we neared Indianapolis Tammy checked the map to see if we would be going by Lucas Oil Stadium, where the Colts play.

Tammy: I wanna go by the stadium and have you take a picture of me flipping it off.
Me: Because Peyton doesn’t play there anymore?
Tammy: Duh.

When she realized we weren’t going to go by the stadium she got quiet for a while before letting me know what she was thinking.

Tammy: I hate that we’re going through an entire state and I didn’t even know where Peyton lived.
Me: I’m pretty sure he liked it that way.

As I’ve chronicled in some of my previous Travel Logs, these long drives are a learning experience for me because I listen to the radio and therefore don’t know any of the Top 40 songs that Tammy loves.

I often tell her to change the channel when songs sound to depressing or remind me of bands I hated in the 80s.

Me: Change it. Get it off of that Pet Shop Boys crap.
Tammy: That’s Phil Collins.
Me: Oh! Then turn it up.

I like Phil Collins. The Pet Shop Boys, not so much.

We were in one small town when Tammy got distracted by what she was seeing.

We pulled off for a bathroom stop in some podunk town and quickly wished we hadn’t because it reminded us of Day 2 of our 2011 vacation (read the Southern Hospitality Part II).

First, there was the bologna sign outside, which if you looked at the picture really good you noticed that it’s NOT “fried” but is instead “frifd” bologna, whatever that is.

We went inside and they had ONE toilet so, being the gentleman I am, I was going to let Tammy go first but she invited me in.

Tammy: They have a urinal too.

I went inside and we couldn’t believe what we were seeing. It was disgusting. There was black mold connecting the floor to the walls and as Tammy hovered above the seat she noticed there were ceiling tiles missing.

Tammy: Oh great. Someone could totally be checking out my @ss right now.

But it wasn’t until she stood up and turned around that she noticed what was written on the wall behind the toilet.

WTF?!? How could someone even write that as a joke?

Needless to say we didn’t buy anything as got outside as quickly as possible.

As we neared West Virginia Tammy was mesmerized by all of the mountains and valleys we were seeing.

She even went so far as to say she’s like to stand on top of some of the hills and sing “The hills are alive, with the sound of music.”

I’m Not Going There

Good for eating, not for pooping.

At some point in the trip I told Tammy I had to poop. I know, I know, TMI but it’s important to the story.

We stopped for dinner and went inside to eat at a Steak Escape so we could take a break from driving.

When we were done Tammy asked if I was going to go because it had been several hours since I mentioned it. I told her I could hold it.

Tammy: Oh my God!! I can’t believe you aren’t gonna go. If you fart in the car I’m gonna kill you.
Me: I can wait.
Tammy: Not me brother. I woulda crapped at the Fried Bologna store if I had to go.
Me: (after I stopped laughing) Ain’t no way. The first place we stopped at had toilet paper so thin I could see through it and you saw how clean the steak place was (it wasn’t). It’ll wait.

Our Final Destination of the Night

We didn’t make it to Winston-Salem for the night, stopping about 45 minutes west in Mount Airy. That leaves us about 2 hours and 45 minutes from Spring Lake which means another early morning.