We slept in a little today because we had decided that we didn’t want to get up early to watch the sun rise over the ocean.

Ashlee and Billy got up as well and let us know they were going to do some shopping while Tammy and I went to the beach. We told them they knew where they could find us when they got back and headed out to find a spot to set up. 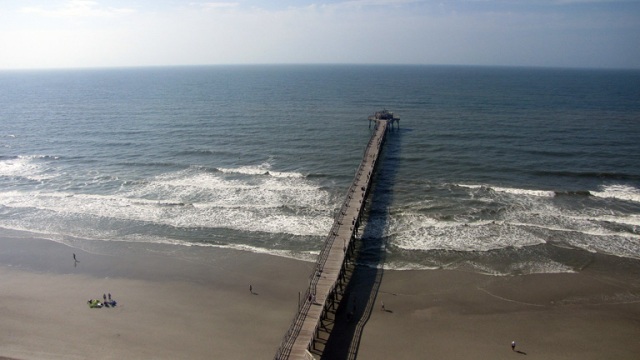 Our view from 16th floor of the Prince Resort in North Myrtle Beach.

Not Enough Hours in the Day

There were two beach chairs in the room when we arrived so we took those out with us along with our towels, sunscreen and cooler. Once we were settled in Tammy had an idea. 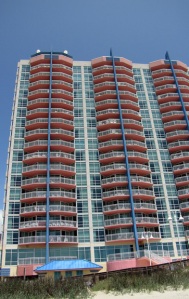 As I’ve chronicled in some of my previous Travel Logs, Tammy and I don’t like it when people start setting up their beach gear within 10-15 yards of us. In places like Gulf Shores, Alabama and Daytona Beach we had a lot more room than we do at here at Myrtle Beach.

So because of that we would allow an 8-yard minimum instead of the usual 10-15, but today someone set up within 5 yards to our left.

He looked over to us as if to ask if it was OK that they sit there. I nodded that it was fine then turned to Tammy.

Me: What am I sposed to say to that? “No, could you move over there a little.”
Tammy: I know, right?

At least he was playing some good songs on the little radio he brought with him so it wasn’t a total disaster.

You Don’t Get Out Much

I kept looking up at our room to see if Ashlee and Billy were standing on the balcony because we were waiting for them to come down to join us on the beach.

We kept waiting and I kept looking because Tammy and I had decided we were going in around 3 so we could go shop and eat around 4 in order for them to arrive back home before dark.

Around 1:30 in the afternoon I looked up and saw Billy standing in the window and started waving to get his attention. He saw me, waved back, raised his shirt and flashed me.

Me: I saw Billy in the window so they are back.
Tammy: Oh, that’s good.
Me: He’s soooooo white. I could tell that from here. He looked like a corpse.

They eventually made their way down to us and after a few minutes they went for a walk down the beach. Since Tammy and I had been out in the sun for nearly four hours already, we decided to pack up and head in. We left their clothes in a chair and hoped they would bring it in later. They did. 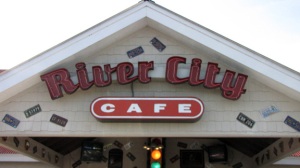 Outside the River City Cafe.

For dinner we went to River City Cafe, which is supposedly known for their hamburgers.

As soon as we walked in Billy stopped in his tracks when he saw all of the writing on the walls.

Billy: Can we write on the walls here?

When we got to our seats both he and Ashlee started reading all of the writings that covered everything.

Ashlee: It says, “Justin Bieber was here. Really.” I highly doubt he actually was.
Billy: That one says, “Holly Brown is a fat cow.” That one says, “Mike Walker had a peanut butter burger and it was good.”

They then asked Tammy if she had any pens in her purse. She found two and they started leaving their marks on the table. When the waitress came by Billy asked if she had a Sharpie. She couldn’t find one but came back with some Crayons. He used those to color the mushrooms he drew around his name, breaking all of them in the process because he was pushing down so hard.

Ashlee, Billy and Tammy outside at the River City Cafe.

They have a pretty big menu but everyone found something and we placed our order.

Me: I was surprised they didn’t ask us how we wanted our burgers cooked.
Tammy: Yeah, I didn’t think of that.
Me: That must mean their burgers are thin.

They weren’t. They just cooked them all medium-well. But they were still pretty good.

We were nearing the end of our meal so we asked a waitress for our check.

Waitress: Was there a young man sitting here?

My brain instantly thought Billy had done something to get in trouble while he went to the bathroom. Turns out he went inside to pay the bill. Sneaky little fella, but we appreciated it.

After dinner Tammy and I headed to the Tanger Outlet Mall to do a little shopping. I knew Tammy could keep herself busy for a few hours and I was excited to find the Nike Outlet in hopes of finding a new pair of Nike Free shoes.

I drove around the outside of the mall trying to find the Nike store then realized Tammy had the maps. I parked, went to find her and set off. I immediately turned around to let her know what I found.

Me: There’s no Nike store here.
Tammy: What? I thought you said there was.
Me: I didn’t realize there were TWO outlet malls. The Nike store is at the other one.
Tammy: Well we can go there now if you want.
Me: No, it’s OK. Just do your shopping. We can go there later.

I roamed the mall looking for shops that would interest me but surprisingly it wasn’t a store that held my attention.

I was sitting outside of the Banana Republic store that Tammy was buying out when I saw a couple walk up to a Dippin’ Dots vending machine.

I was jotting down notes from the day when I saw the woman put her money in, push the button and get upset.

Woman: Are you kidding me?

Apparently the machine had taken her money. She pushed the “Return” button several times in an attempt to get her money back.

The husband/boyfriend tried pushing it as well and when she didn’t think he was doing it hard enough she pulled out her pocketbook and use it.

I stopped writing notes, grabbed my phone and snapped a picture of the Dippin’ Duo.

We left the outlet mall and I wanted to stop by a liquor store to pick up some “inspiration” that I was talking about in my Day 2 post.

We pulled into the parking lot around 8 p.m. and I couldn’t believe what I was seeing. The store was closed and had been closed since 7 p.m. according to some stupid state law.

Me: You’d think that would be something they’d tell people when they check-in to the resort.
Tammy: I know, right? Maybe we can go to a bar and ask them to sell us a bottle.

How Many Toes Do You Have?

Not what I thought Tammy had…

We went to Wal-Mart instead to pick up a few things for us to eat during our stay and to get an umbrella to protect us from the sun, which had already done a number on me.

We were walking toward the magazines when Tammy asked me a question.

Tammy: Am I really that good-looking that men have to stare at me?
Me: Yes.

It would have been perfect had I just stopped right there but, of course, I didn’t.

Me: Maybe you had camel toe.

She didn’t like that answer and went on to tell me that some old man was staring at her all creepy-like.

We made it back to the room, without any alcohol, watched a little TV and got ready for bed looking forward to the next day of sitting on the beach doing nothing.