Today is our last full day at the resort, so we decided we were not going to go anywhere so we could spend the entire day on the beach.

Before we headed down, Tammy was trying on one of the 11 bathing suits she brought with her and was struggling with which one to pick.

I barely remember which suit she tried on, but it was no where close to falling into the banned category that North Myrtle Beach has in place (thongs, g-strings, etc.).

She decided to go with a different, less revealing, suit and we headed down to find a spot on the beach.

Our little slice of heaven…

Ain’t No Shame in this Game

It didn’t take long for me to spot someone wearing a rather revealing bikini.

Me: See, she wasn’t ashamed to wear a bikini.
Tammy: You’re right. I think she’s pregnant though.
Me: (spotting another one who SO shouldn’t own a bikini) What about her? She wasn’t ashamed either.
Tammy: Her bottoms aren’t as small as mine.
Me: Thank God.
Tammy: Mine shows my tattoo.
Me: There’s a lot of people showing lots of stuff they ought not to be showing.

Set up by the water’s edge. 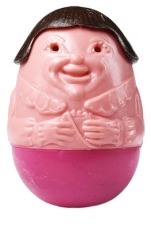 Weeble’s wobble but they don’t fall down…

A little while later Tammy spotted a rather heavy-set couple holding hands and playing together in the water.

Tammy: That could be us.
Me: Ewwww… No it couldn’t. I don’t want to look like that.
Tammy: I think she’s cute… all weeble-wobble.

We “lovingly” nicknamed them Mike and Molly from the CBS sitcom, but these people would have made them look skinny.

Tammy even made up a little story about them.

Tammy: I think they are newlyweds.
Me: Why?
Tammy: Because they are holding hands. That means they still love each other.
Me: Yeah, cause after you’re married a while you don’t gotta do that stuff.
Tammy: I know, see, newlyweds.

We watched and laughed as Mike and Molly walked out into the water and held each other as the waves crashed around them.

At one point we thought they were in trouble when they were sitting in the shallow water near the beach.

Sure enough, they got up but Tammy was still concerned for Molly.

Tammy: I don’t see how her legs can hold her up.
Me: It’s like toothpicks in a potato.
Tammy: (shakes her head) You’re right, but you’re terrible.

Tammy with her toes in the sand, prolly during a ”doing it” part of 50 Shades.

We had moved our chairs down to the water’s edge so our feet would be in the water when Tammy spotted something in the ocean.

Tammy: Oh look at that sailboat.
Me: F^ck that. Too much work. People say sailing is so relaxing, yeah, if someone else is doing it. 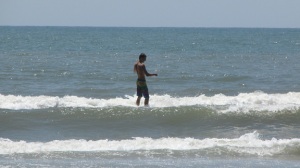 Riding the “killer waves” for 2 seconds.

We sat there watching more surfers (aka floaters) try to ride the waves near the pier. During the first couple of days the waves were actually decent, due to Beryl churning offshore, but the waves today were so small that I would have gotten bored with a boogie board.

But not these surfers. They’d paddle out to catch a wave, hop up on their boards and ride it all of 2 seconds.

But hey, they look cool walking down the beach with their boards under their arms and paddling out into the water.

The Belly of the Beast

A little later we were watching a lady doing something out in the water and struggling as the waves were crashing into her.

Tammy: She might lose her top.
Me: Nah, she’s just washing her boobs.

Then when she came out of the water, I noticed something that Tammy always worries about.

Wouldn’t Be Caught Dead In That

The day was floating by and we had moved our seats closer to our umbrella when I noticed a couple walking in front of us.

I didn’t give Tammy time to respond, answering for her instead.

Me: (imitating Tammy) Because I’d never wear that bathing suit.
Tammy: (looking up and laughing) Yeah, that’s true. Plus that’d be us in about 5 years, maybe 10.

Wouldn’t It Be Funny

Two ladies, one of them being the boob washer, had set up near us earlier in the day with their two daughters.

The daughters played in the water, built sand castles and had a great time throughout the day.

Around 3 p.m. they started to pack up their stuff so they could go inside.

Tammy: Wouldn’t you love to see one of those kids push their Momma’s over in the water?
Me: (looking at Tammy and shaking my head) I can’t write that because it shows how mean we are.
Tammy: Yeah, it does.
Me: Because nothing else I’m writing about shows that.
Tammy: (laughs)

The Tides They are a Changin’

One thing we noticed that we don’t remember happening at some of our other beach vacations, was the tide coming in and out twice a day. I swear it seems like it only happens once at our other spots.

Because of that we had to make sure our chairs, bags, towels, etc., were always a safe distance away from the incoming water.

There was one family, who had set up a little to close to us for our liking, that hadn’t learned about the constantly changing tides.

All of them were playing in the water when a wave made it all the way up to their spot and covered their towels.

Me: That wave just got their towels wet.
Tammy: Tough sh!t. I ain’t movin’ it.

That doesn’t show how mean we are, right?