Tammy’s Gone and May Never Come Back

My wife is gone and I can only hope she’s going to come back home.

Look out Peyton!! There’s a Tammy on the loose.

OK, maybe I’m being a little dramatic, but she IS in Denver now and that just happens to be the same place as the one man she might leave me for, Peyton Manning.

Tammy’s love of all things Peyton has been well documented in my blog, from her Five Degrees of Separation, to her crying when she had to release Peyton from her fantasy football team last year and her FF strategy of drafting Peyton every year.

So it didn’t surprise me to find her “stalking” him on her computer Thursday night. She was trying to find where the Broncos practice (Dove Valley in Englewood, Colorado), if they would be there (they will) and how far away it is from where she is staying (14.2 miles).

So while I know she’ll be busy the next three days with her conference, there’s part of me that’s worried she might spot him out somewhere and decide to never come home.

Last night when Tammy finished packing her suitcase she asked me to bring it out of her room because it was too heavy to lift.

I got it into the living room and figured I better weigh it since I know they have weight limits on luggage these days.

She’s 5-foot tall and is only going to be gone for 3 nights.

Me: I don’t know what the weight limit is so you prolly should take some stuff out. You know you’ve got WAAY too much stuff as it is.

She put the suitcase on the floor, unzipped it and began going through everything. A few minutes she was finished.

She paused a few seconds before starting back up.

Tammy: We have to dress for day and night so I have to have two outfits each day. One for the conference and one for if we go out at night.
Me: So that means you’ve got two options for each outfit per each day, so four outfits for each day.
Tammy: No, and shut up.

Not What She Thought

Her flight left mid-morning which meant we had an early morning ride to the airport. We stopped off at Burger King for breakfast because “their burrito doesn’t have peppers in it like McDonald’s.”

We got our order and back out on the road. In less than 2 minutes Tammy had ripped into her burrito and took a bite. I thought she had bitten into a turd from the look on her face.

Tammy: I didn’t know it had peppers in it!!

I just started laughing as she handed me the rest of her burrito.

Me: I’ve got a sausage biscuit in there you could have.
Tammy: I don’t want a BISCUIT. I wanted a burrito. They didn’t always have peppers.
Me: Yeah, they had a big one there before.
Tammy: That’s what I thought I was getting. It’s that ironic. (busts out laughing)
Me: Shut up, jerk.
Tammy: (still laughing) That’s a good one.

You’ll Miss Me When I’m Gone

Tammy then started getting worried that she had offended me.

Tammy: Great, now if I die in a plane crash you say bad things about me, like I’m incontinence, which I’m not by the way.
Me: What? In continents?
Tammy: No, incontinence.
Me: In consonant?
Tammy: INCONTINENCE. It means I pee myself, which I don’t, but it’d be funny if you said that.
Me: I’d never say that. I’d just say you pee yourself all the time.

Then, continuing the plane crash scenario, she said someone would ask me how old she was and paused for me to answer.

The look on her face told me I wasn’t right so I improvised.

Me: This year. You didn’t let me finish. You’re 43 this year.
Tammy: I’d come back and haunt you if you got my age wrong, you jerk.

I tried to get her back by telling her I’d bury in the only place she’s ever mentioned as her final resting place.

Me: If you died, I’d bury you under the pecan tree at Granny’s.
Tammy: You would? Awww, that’s sweet.

Tammy (R) and Granny (L) picking pecans under the tree Tammy said she wants to be buried under. 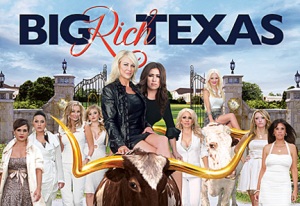 The b!tches of Big Rich Texas.

On our way to the airport Ashlee texted Tammy and told her to be safe on her trip “to Dallas. At least that’s where I think you’re going.”

Me: I’d be going with you if you were going to Dallas. I’d be driving around trying to find all them b!tches we see on TV (GCB, Big Rich Texas, etc.) and taking pictures. And I could go to see the Cowboys. There’d be bunch of thangs for me to do in Dallas, a bunch of thangs.

Tammy just laughed and agreed with me because she’d be so excited if was got pictures with those crazy b!tches.

We made it to the airport without any major incidents and I dropped Tammy off so she could check her bags curbside.

She stood in line waiting to be helped as I got back in the car. I rolled the windows down and started yelling her name so she would turn around.

She never turned around so I honked the horn.

She still didn’t turn around so I just shook my head laughing as I pulled away.

Disclaimer: Those of you who are easily offended or don’t like “bathroom humor” should stop reading now. What follows below is what happened to me on my way back from the airport. You’ve been warned.

What I looked like as I was driving home from the airport.

I needed to go to the bathroom before we left this morning but decided to wait so we would have plenty of time to get to the airport. Plus, as I wrote about in Day 1 of this year’s Travel Logs, I don’t have a problem holding things.

Well, that’s what I thought anyway.

A few seconds after I dropped Tammy off I started to get that feeling. You know, the one from Dumb and Dumber when Harry’s walking and feels everything drop. In case you forgot,  you can watch it here.

I figured it would pass, like it had back on Day 1, and pressed on toward home. I had barely gotten out of O’Hare when I started to get the chills so bad I could see goosebumps on my arms. You know the ones I’m talking about, the Doo-Doo Chills.

I kept telling myself they would pass and that I could make it home as the first contractions started hitting me.

After the first few subsided I thought I was going to be in the clear, until my exit out of O’Hare was closed and I had to take a detour. Not only did it eat up valuable time that I desperately needed, but I ate up my toll money because I had to pay twice.

I Don’t Know If I Can Make It

I kept telling myself that I could make it home, which was a little more than an hour away. Part of the reason I didn’t want to stop somewhere was because I didn’t want to pay an additional toll to get off the interstate and another one a few miles down the road.

But when the contractions started happening a little more frequently I started thinking of places that I would deem as acceptable (clean) to stop.

I set my mind on making it to a Culver’s at the Woodstock exit, which was still at least 45 minutes away.

I was gripping the steering wheel with both hands and had goosebumps down my arms as I zipped in and out of traffic, going well above the speed limit.

I tried turning on the radio to distract me but that seemed to make it worse so I quickly turned it off.

I tried changing my position in the seat, hoping that would relieve some pressure, but that was a mistake. I think it only helped mix things up a little.

I was breathing like I was in labor and was stiff as a board, not even wanting to move my feet other than pressing the gas.

I didn’t have any cash left and kept telling myself I could make it home.

But my exit was still about 30 minutes away and the contractions were starting to come with very little recovery time between them and I was REALLY starting to get worried.

It was getting so uncomfortable that I was starting to think about just going in the car. But the thought of having to clean everything combined with how pissed Tammy would be since we took her car caused me to keep holding on.

Then there was no recovery time between the contractions and I knew I was in trouble because I was still 20 minutes away from my exit.

I scanned the side of the road and thought about pulling over and squatting. But the thought of a cop pulling up behind me caused me to keep holding on.

There were signs for hotels at an upcoming exit and I decided that would be better than the Culver’s I was holding out for.

I headed down the exit ramp, blowing through the $1.10 toll booth (which I paid later online) and started looking for the first hotel. At this point I wasn’t even sure that I could stand upright, much less walk.

I pulled into the Holiday Inn Express parking lot, got out and headed toward the door, mumbling under my breath with each step as I did the Doo-Doo Shuffle.

Once inside the lobby I started looking for the bathroom and saw a sign saying they were under construction but pointed to ones in the conference center part of the hotel.

I continued my shuffle-walk into the conference center, trying to act as if I belonged there and knew where I was going.

I passed two big rooms where wedding receptions would be held tonight, my eyes scanning furiously for the bathroom.

I rounded the corner and when I spotted the “Men’s” sign I broke out into run. I burst through the door and was so glad no one was in the bathroom.

I won’t go into any more details than that, but I had never been so happy to go to the bathroom in all of my life.

I texted Tammy about my what had happened and this was her response.

Tammy: I told you to go at home. We had plenty of time. But glad you didn’t sh!t yourself. You are in my car and it would have stunk forever.

She definitely would NOT have come home if that had happened.

12 Responses to Tammy’s Gone and May Never Come Back