We woke up this morning still divorced from Tammy’s late-night ruling (Day 8) and headed down to breakfast in the lobby.

We were the only people in the lobby at the time when Tammy brought up our current marriage situation.

Tammy: You know the only way to not be divorced anymore is to ask me to marry you again.

Apparently she didn’t like the look that I gave her, which was a mash-up of a deer in headlights and ain’t-no-way-brotha.

We sat in silence for the next couple of minutes as she planned her new life of freedom and I figured out how I could get her back.

Five of a Kind = Full House

The silence was broken when another family stopped by for breakfast. But this wasn’t the “normal” family of husband, wife, and two kids.

Instead this was a husband, wife, and FIVE kids, who all seemed to be the same age. The three girls looked like they could have been triplets, but the two boys didn’t look the same. They definitely were all the same age, maybe 4 or 5 years old.

Suddenly our attention was focused on trying to figure out if they actually WERE the same age and what having five kids at the same time is called, besides hell.

Tammy: I think that’s sextuplets. (It’s actually quintuplets)
Me: Maybe? All I know is twins and triplets. But I know I’d have a stroke if the doctor told us we were having five kids at once.

Are The Allowed to Sing That?

The addition of the kids to breakfast definitely changed the attitude in the room. I heard the Mom tell them they needed to pray before the ate when one of the girls took the lead.

We just sat there smiling listening to them talk, asking their parents questions about the food. We eventually headed back to the room and started to get ready to leave when Tammy started talking about The Family again.

Tammy: I wonder where they went (on their trip). I think they are from Ohio.
Me: Why?
Tammy: Because I heard him say something about “south of Columbus.” Maybe they are Mormon. No, they wouldn’t be singing that Jesus song.

Again, I must have had an odd look on my face.

What it took to tote The Family.

We were pulling out of the parking lot when Tammy started trying to figure out which car belonged to The Family.

I thought their ride was sitting close to our car, but one look inside the mini-van let me know it wasn’t The Family ride.

The seats had all been folded down and there were bags of laundry hanging everywhere.

Then Tammy spotted a blue cargo van that “had” to be theirs. Once she saw it had a Ohio license plate she “knew” that was The Family ride.

Was That You? Pt. II

Apparently Tammy thinks I fart all the time, because not only did she ask me if I did during Day 8, but she asked again today.

Tammy: Did you fart?
Me: No. I think it’s the town (some place in Ohio).
Tammy: Smells like Sh!tville. (laughs) It smells sooo bad. It’s like someone rubbed poop inside your car. (holding her nose) I can’t live here.

We had seen several spots on our way down that we wanted to remember so we could stop and take pictures.

I decided to use one of the places as the spot where I’d end our 12-hour divorce.

An Adult Shop Church. The perfect place to ask Tammy to marry me? I think so.

But, I forgot to ask her until AFTER we had stopped to take a picture. She laughed, said it would have been perfect and considered our divorce over.

Don’t Lose This One

I saw signs for a Tanger Outlet Mall and asked if Tammy wanted to stop. Considering we had already been to two outlet malls already I figured she’d say no.

But once she saw they had a Banana Republic store she said we had to stop. She had bought a white sweater from there during one of our stops but lost it somewhere on Day 7’s trip to Broadway at the Beach

Tammy: I’m so pissed I lost my sweater and want to get another one. Hopefully they’ll have it here.
Me: If they do, please don’t lose it this time.

They DID have the sweater but I guess she was worried about losing it as well because she ended up getting TWO, a white one and a green one.

Another place we wanted to stop and take a picture was in the small town of New Lebanon, Ohio, where we spotted a McDonald’s Training Center.

What’s so special about a McDonald’s Training Center? 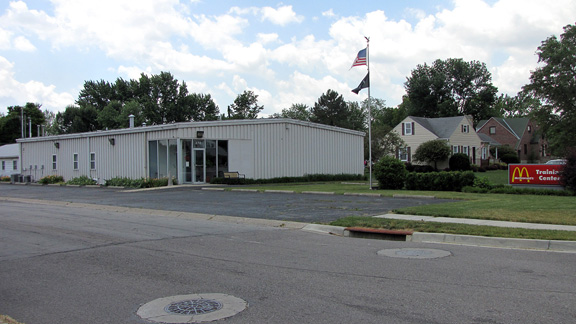 Not what I expected a McDonald’s Training Center to look like.

I had remembered that they had a peanut butter burger there that freaked Guy out a little but wasn’t sure if I wanted to get it. But when we got there the waitress told me that’s what most people stop by for so I went ahead and ordered it.

It’s called the The Duane Purvis All-American: A burger for the more adventurous! A 1/4 lb. of 100% ground sirloin with thick, creamy peanut butter served on a toasted sesame seed bun with melted American cheese, lettuce, tomato, pickle, and onion. A very special treat!

Tammy went with the less-complex Bert Burger: A 1/4 lb. of our delicious 100% ground sirloin covered with American cheese with 2 strips of bacon, lettuce, tomato, and Miracle Whip on a toasted sesame seed bun.

I had the “roughage” (lettuce, tomato, onion and pickles) on the side so I could really get a taste of the peanut butter. But looking back on it I prolly would have at least put the lettuce on to add a little crunch and texture.

It was very messy because the peanut butter melts from the heat of the burger, but it was REALLY good.

We sat there and ate while listening to some loud talking girl telling her family, and pretty much everyone else in the place, about the things she’s been doing at Purdue University.

Our 2012 vacation was complete.