As I was driving in to work today I heard ESPN’s Mike & Mike talking about whether or Kansas City Chiefs running back, Jamaal Charles, should have asked for Peyton Manning’s autograph after their game Sunday.

Picture of the Autograph Controversy…

I don’t know what everyone is freaking out about over him asking for an autograph.

It’s not like he said he’d have to rent a car if he ever went to New Orleans so he could drive by where Peyton went to high school, where Archie and Olivia live or where Cooper works, because that would just be weird.

Oh wait, Tammy said all of that. 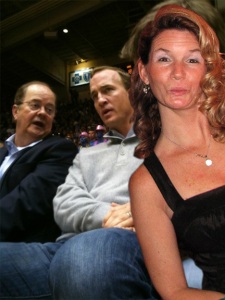 Tammy would pay to sit this close to Peyton.

When I recently reminded Tammy that I once stood beside Peyton, on the field in Memphis after Tennessee played Ole Miss in the mid-90s, she made sure I knew how big of a role that played in our relationship.

Tammy: I know. Why do you think I married you?

When she saw the actual video of Charles asking Peyton for an autograph (here) I was blessed with even more of her “Whoa Crazy, Crazy.”

Tammy: Dang, you can get that close to him?
Me: Prolly not everybody.
Tammy: I’d pay to see him. You know, to like get a front row seat for something.

So no, I don’t really think Jamaal Charles asking Peyton for an autograph is that big of a deal.

2 Responses to What’s the Big Deal?