Anytime I get a chance to go to a restaurant that Diners, Drive-Ins and Dives Guy Fieri has visited I’m not going to pass it up.

So, when my co-workers asked if I wanted to go to Uncle Lou’s for fried chicken a few weeks ago, I couldn’t resist.

Several friends had told that I should try out Gus’s Fried Chicken, so Uncle Lou’s was new to me and even though I’m not a big fan of fried chicken, I knew if the place was good enough for Triple D then it had to be good enough for me.

Around 11:15 a group of six people loaded up and headed out for lunch. I had been warned about the shady area we were about to enter and since I’m “the new guy,” the people in the car were pointing out some of the “good areas” we were passing them.

You know things like the boarded up apartment complexes (plural), the adult movie shop and the various “street walkers.” I didn’t say much and just soaked in all in until we pulled into the parking lot of Uncle Lou’s.

I opened the door, climbed out of the back seat and looked around to find my coworkers already 25-30 feet away from me.

At first I thought they were heading for the door because Uncle Lou’s was giving away free food or something, but I soon realized it was due to their fear of the neighborhood.

I admit the place was a little sketchy, but really, in broad daylight? I would have been a little uncomfortable at night, not in the middle of the day, but then again I’m the new guy so maybe they know something I don’t.

One thing I did notice as I made my way through the parking lot was that Uncle Lou is definitely capitalizing on the whole Diners, Drive-Ins and Dives thing as they have a giant picture of Guy and Uncle Lou on the sides of their delivery van.

I made it inside, got at the end of the line and started trying to figure out what I was going order. The menu had a lot more items than just fried chicken so I was glad I was at the back of the line.

I knew I was there for the chicken so my biggest decision was whether or not to get the original or the Honey Dipped, which was changed to Sweet, Spicy Love after Guy’s reaction.

A coworker said he was going to order the original and would trade me a piece if I got the Sweet, Spicy Love so that’s what we did.

We swapped our chicken wings and I dug in.

I ate the original wing first and was actually surprised and how good it tasted. The batter wasn’t too heavy, or crunchy, and actually had really good flavor. I was also expecting there to be a lot of grease in the chicken but there wasn’t very much. 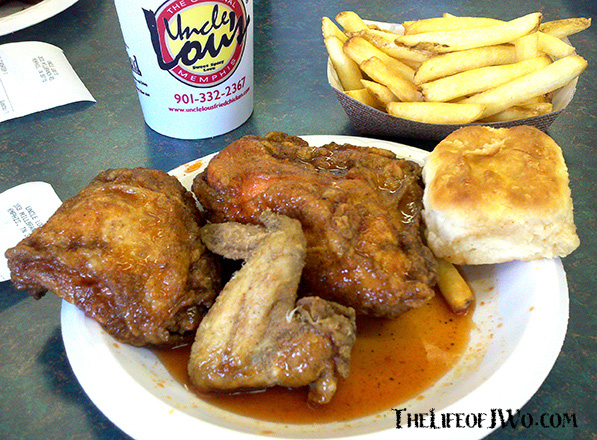 KFC had long turned me off of fried chicken, but Uncle Lou brought me back and showed me how good REAL fried chicken can be.

I definitely will be back.

9 Responses to My First Taste of “Sweet, Spicy Love”