Today I Got on the Gus Bus

Since we have moved to the “Bluff City,” one of my missions is to visit those iconic eateries. Actually, I don’t have any other missions, besides not gaining 50 pounds or getting the diabeetus, but those aren’t really missions.

One of my criteria for being an iconic place is if the restaurant was shown on TV. If I’ve seen it on the Food Network, Travel Channel or anywhere else, then I’m willing to find it and give it a shot.

The only other criterion (Word just made me use criterion, whatever Mr. Smarty Pants) is personal recommendations from friends or coworkers.

It just so happened that today’s lunch location hit both criteria (or should this be criterion?).

Not only was Gus’s Fried Chicken on Man vs. Food (here) and The Best Thing I Ever Ate, and others, but it was also recommended by several of our friends who live in or around Memphis, as well as my coworkers.

We got to Gus’s around noon and the place was packed. There was about a 10-minute wait for a table, so I checked out the menu to pass the time.

One of my coworkers told me he was getting wings because they were so big (they were), but I decided to get the 2 Piece White Plate which came with a breast and wing. I chose fries and coleslaw as my two sides. 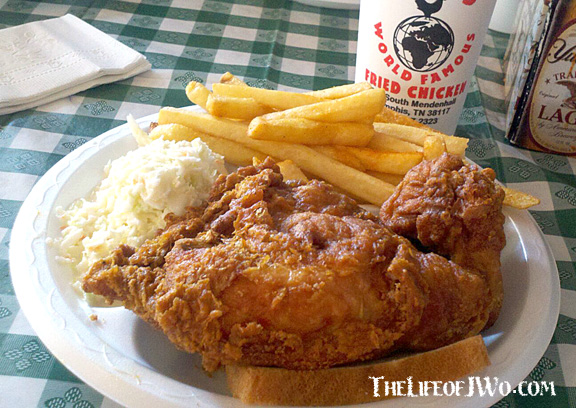 My 2 Piece White Meal from Gus’s Fried Chicken in Memphis.

The chicken at Gus’s is a lot different from Uncle Lou’s, which I wrote about here. Gus’s is crispier and a little bit spicier, albeit a dry spicy compared to Uncle Lou’s Sweet, Spicy Love. I’d say the spiciness was comparable to the mild wings at Hooter’s.

One of the first things I noticed, besides the crunchy exterior, was the white bread, serving as a sponge, under each piece of chicken.

Coworker #1: I like how the bread turns to toast because of the [heat of the] chicken.

The chicken was very moist and juicy, without being too greasy (I guess the bread did its job). I usually don’t eat the “skin” from fried chicken, but I found myself trying to eat every piece of skin today. It was as if I hadn’t eaten meal in weeks the way I was picking it off.

I’m not a big fan of coleslaw, but Gus’s was AMAZING. It was on the sweet side, without being overpowering and the wet, coolness perfectly counteracted the spiciness of the chicken.

It’s hard for me to say if I liked Uncle Lou’s or Gus’s better because despite being the same type of food they each treated the chicken differently.

Lou’s Sweet, Spicy Love was delicious but it’s hard to compare with Gus’s spicier version because one was wet (Lou’s) and one was dry (Gus’s). Both were very flavorful.

One thing Lou’s has going for it is the option to get the homestyle or the Sweet Spicy Love, whereas Gus’s is all considered spicy.

That “spicy” might keep Tammy from going to Gus’s, despite it being about 9 miles from us.

Tammy: If I want fried chicken, I don’t want spicy.

Oh well, her loss, but I know I’ll definitely be back.

1 Response to Today I Got on the Gus Bus