Today I am able to cross something off my Food Bucket List. Not that I really have a Food Bucket List, but if I did I’m pretty sure today’s meal would have been on it: chicken and waffles.

I know what you are thinking, “Ewww, chicken and waffles. That just doesn’t even sound good.”

I hear you and until recently I felt the same way. It wasn’t until I saw Guy Fieri making chicken and waffles on an episode of “Guy’s Big Bite” that I actually thought about trying the combination.

Since chicken and waffles are new to me and we are new to the Memphis area, I took to the Twitter to find where the locals go.

The folks over at Choose 901 responded with several choices.

I now had options, I just had to figure out which one to choose. But when I got a response Tweet directly from Cafe Eclectic I knew I was going to try theirs first. Anyone that goes out of their way to get me to try their place definitely gets top billing. 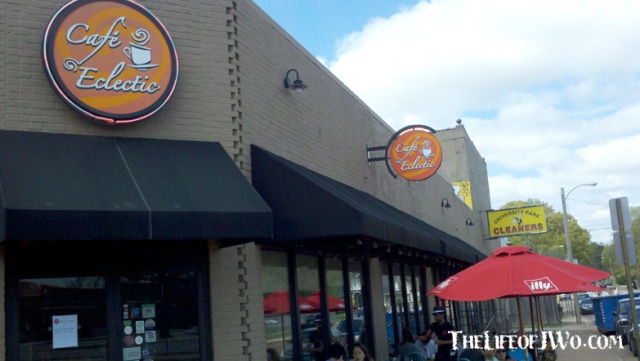 I had mentioned it to Tammy and she suggested swinging by Cafe Eclectic’s Midtown location (603 N. McLean Blvd.) today for lunch.

I Tweeted that we would be stopping by at lunch and got responses via Twitter almost immediately. I asked if the Cafe Eclectic mascot, Cate, was going to be there and was told she would be there around 1.

Tammy and I got there a little after noon and the place was packed. I sent out a tweet that we had arrived and were waiting then got a response saying Miss Cate (right) was waiting for us.

The next thing I know I see Miss Cate being brought up to the front where we were waiting. I introduced myself to her mother, Rachel, who had been sending the tweets.

We talked a bit and she headed back to her table with Miss Cate.

Inside Cafe Eclectic. Just over the half-wall is where all the magic happens.

Our name was called and we were led to our table, which just happened to be two spots down from where Rachel and Cate were sitting.

She smiled and waved as we walked by and even came over to our table to talk to us about the menu. She told us that Cafe Eclectic is a family owned business and that her mom and brother worked there too.

We talked about how their version of chicken and waffles came to be (it was a “pregnancy staple” for Rachel) and how they tried a couple of different versions before settling on the one that’s served now.

I didn’t even look at the menu because I knew what I was going to be getting (duh!) but Tammy took her time checking everything out.

Since we were there on a Sunday, they had the brunch menu, which ranged from typical breakfast fare – eggs, waffles, oatmeal – to soups, sandwiches and salads going all day.

They also have separate menus for breakfast,  lunch and dinner menus. We’ll definitely be back because Tammy wants to try the Mediterranean Couscous and the Beer Burger (marinated in Guinness) caught my attention.

But today, I was here for one thing on the menu, the Chicken-N-Waffle, and that’s what I got.

I’m not a food critic, but I love food, as anyone who knows me can attest, so I was excited and nervous about trying this combination.

I could hear the crispiness on the chicken as I cut into my first bite. Instead of drowning the bite in syrup, I added it sparingly by putting a little on the first piece before bringing it to my mouth.

I wasn’t really sure about what to expect but… It. Was. Amazing.

It’s hard to explain it, not only could I feel the different textures in my mouth, but I could taste each layer of food separately.

I could feel the crunch of the breading, but could also distinguish the different spices used in the batter. The chicken, which was cooked perfectly, had its own fresh taste, possibly the freshest I have ever tasted.

The texture of the waffle was perfect and because I hadn’t covered it with syrup it still was crispy on the outside and spongy inside.

Tammy, who was much more skeptical about the combination than me, even wanted a bite and after taking it was wishing she had ordered the same thing.

Don’t get her wrong, she thoroughly enjoyed her meal. She went with the Make Your Own Omelet option with mushrooms, spinach and turkey sausage (one of us has to eat healthy). She commented about the freshness of the eggs and mushrooms but she was just so surprised with how good the chicken and waffles were that she would have been OK getting that instead. 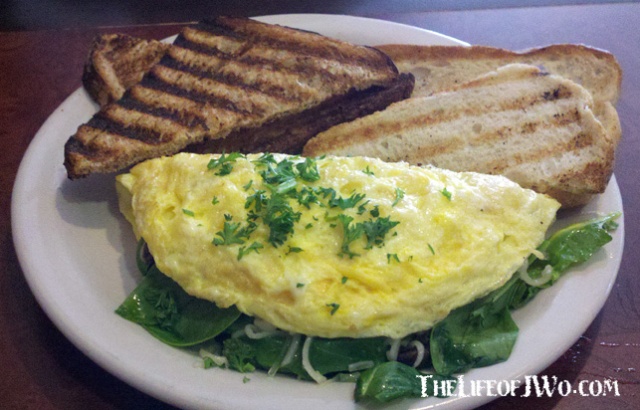 One of the things that I liked about Cafe Eclectic’s version is that they use a boneless, skinless chicken breast instead of the usual bone-in breast. Their version allowed me to cut into the chicken without picking it apart by hand.

Tammy liked that the waffle wasn’t too thick and I said it reminded me a little of the ones from Waffle House. That’s good right? Because their waffles are so good they have a house named after them.

I also thought it was REALLY cool that Rachel not only interacted with me via Twitter, but she also was interactive in actually finding us in the restaurant.

She stopped by our table several times to see how we were doing, what we had ordered and how we liked our food.

We talked about how they use Illy Coffee and how they are a free trade and free market company.

We even talked to her about the “Little” Cafe Eclectic in Harbor Town and that it’s within walking distance of so many homes. She told us about them opening a new Cafe Eclectic inside The Stratum on Highland at 510 S. Highland Street and how she’s hoping people will be willing to walk there as well.

We drove by the Highland location, which isn’t open yet, and we don’t think there will be any problem with the walk-in crowd as it’s about 2 blocks away from the University of Memphis (one block away from Fraternity Row).

In an economy where so many small businesses are failing, the Cafe Eclectic family is obviously doing something right. After our visit today, it’s easy to see why the family and place is so loved by the community.

Even though none of their three locations are within walking distance of us, we will definitely be back.