A J-Fro Update: It’s Over When It’s Over

I had a good run and even though the finish line is in sight, I think it’s over.

“What? Over? Did you say “over?” Nothing is over until we decide it is! Was it over when the Germans bombed Pearl Harbor?”

Look, I totally understand what you are trying to do, but I think I’m done. I’ve proved my point, whatever it was, and besides things didn’t really go as I had originally planned.

“So you are just gonna quit?”

I prefer to call it ending things earlier than anticipated due to unforeseen circumstances.

Back in November I announced that I was Growing ’Fro for Forty where I had decided to let my hair grow out until my 40th birthday, which is just around the corner (only 36 days left).

I had intended of posting quarterly updates showing the status of the ’fro but that never happened.

Some of the reasons I didn’t post updates were because the months from December to March were pretty hectic, what with the holidays and us moving from Chicagoland to Memphis and all. But mostly it was because I was lazy.

Despite not posting the pictures or giving any updates here or on Facebook, I’ve continued to grow my hair, even though Tammy hates it.

Comments like these are pretty much the norm around our house…

Tammy: You know it’s bad when you wake up with worse bedhead than me.
Tammy: I want to kiss you, I just don’t want to look at you (holds my hair back).

Her dislike of the J-Fro, as she “affectionately” calls it, is part of the reason I’m giving up on growing my hair, but it’s not the only reason.

I had even contemplated posting a poll where the readers could vote on whether or not I should cut my hair but decided against it because I’m pretty sure none of you would let me “stop short.” 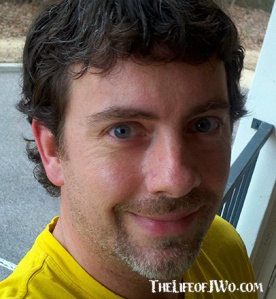 My last trimming was on March 15.

It’s easy for someone else to tell another person they should keep going, even if doing so would make the person miserable.

For example, my friend Daniel recently said he was giving up running marathons because he just lost the feeling for them. He didn’t ask anyone’s permission, he just pulled the cord and was happy with his decision.

Not that growing my hair out is anywhere close to the same commitment and dedication required to run a marathon, but I just don’t have the desire anymore.

What it looks like fresh out of the shower. Yes, it’s the same yellow shirt as the March 15 picture, but the rest of the pics were taken April 12.

This is what it looks like after it’s towel dried. 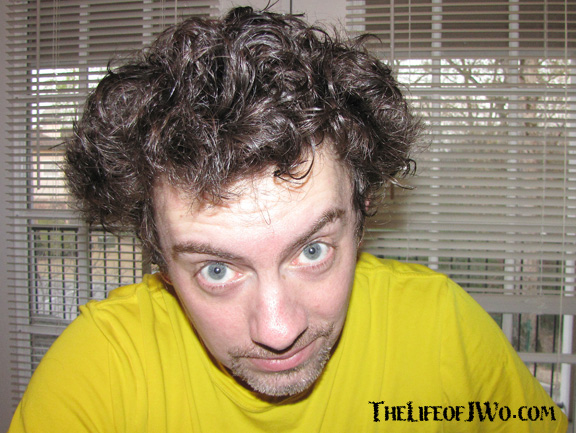 Imagine waking up to THIS every morning! 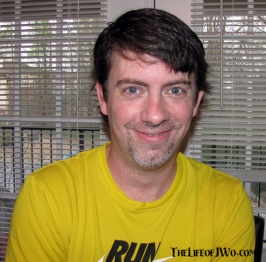 Rocking The Sunday Part. Tammy can’t look at me when I do this. 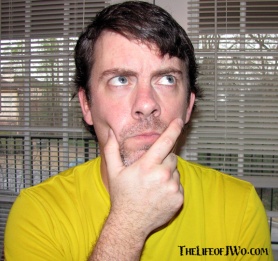 Reasons to Stop Growing the J-Fro

The early stages of humidity.

It doesn’t do well in the humidity. When I decided to grow my hair, the thought of us moving South was merely a pipe dream, something we’d like to do but didn’t really think would happen. Now that it has happened, the hair thing doesn’t seem like such a good idea. It’s not even May yet and I’ve had my hair curl up more times than I can count.

I want to kiss you, I just don’t
want to look at you 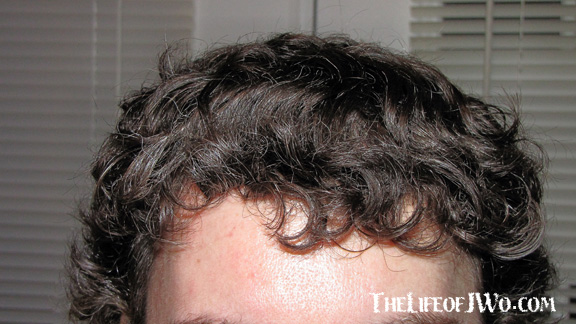 The curls are starting to tighten up.

It’ll save me time.
My hair is so thick that it takes a good 4-5 minutes for it all to get wet while I’m standing in the shower.

Then I spend 5-7 minutes putting hair salve in it in hopes that it will help control some of the curl and frizz.

This is what it looks like after adding some hair salve.

I’ve thought about using some of Tammy’s hair utensils to stop it from curling up so much. That in and of itself should be reason enough for me to stop growing my hair.

I see more stray hairs around the sink. When my hair is short it doesn’t fall out as much, or at least isn’t as noticeable.

It’s hot. Having all this hair is kinda like wearing one of those Army helmets all day. It just traps the heat inside, which isn’t a good thing for me.

Getting it cut is going to feel like instant air conditioning.

It’s not proving anything.
My intent was to grow it out to “spite” all of the my friends, some actually younger than me, who don’t have or aren’t able to grow hair like me.

But since I didn’t posts pics and updates along the way then I’m just growing it to spite Tammy instead.

Tammy HATES it. Remember her quotes above? Those are the tame ones.

Usually when I know Tammy doesn’t like something I tend to keep doing it just to pester her, but this is something that not really fun to me anymore. 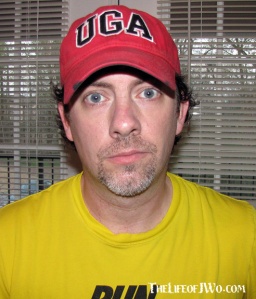 The Hat: It goes everywhere with me.

I wear a hat all the time. You remember those American Express “never leave home without it” commercials? That’s how I am with my hat. I throw some salve in my hair then put on my hat to help keep stuff from curling up, which until recently did the trick. Now it’s gotten so long that the front of my hair curls under the hat.

My hat goes with me everywhere because with hair like this I tend to have “bad” hair days more often than not.

It makes me look fat. I don’t know if my hair is really the cause or if it’s more of me sampling all of the good food Memphis has to offer (fried chicken, burgers, chicken and waffles, etc.)

Does this make me look fat? Or like the lunch lady?

I don’t want to have a hair tan line on the back of my neck. The weather here in Memphis has been really nice, so we have been taking advantage of it by exploring the town. We’ve run out to Beale Street, Harbor Town, Mid Town and have plenty more things planned. I don’t want to get my hairs cut in a month and have a big white strip on the back of my neck from where it was blocking out the sun.

I want to surprise Tammy and my coworkers. Besides Facebook pictures, my coworkers have only seen the “fluffy” version of me. I had a much shorter, but longer than usual, version of the J-Fro when I interviewed and started here, but that’s all they have ever seen. All of them won’t care that I got it cut, but I figure it’d be funny anyway.

I haven’t told Tammy of my decision yet, so PLEASE DO NOT text, email or send her stuff on Twitter or Facebook, because I want to see her face when I walk in the door after getting it cut. I’m going to try to record it like I did the time I surprised her by Coming Out of the Closet. We’ll see how it goes…

Regardless of the reason, I just know that…

It’s over when it’s over
Ain’t it, baby, ain’t it?
Rips ya like a dagger,
Can’t it baby, Can’t it
Wish we could do it over
Damn it, baby, Damn it
We had it in the air, and just couldn’t land it

14 Responses to A J-Fro Update: It’s Over When It’s Over