I’ve had a lot of burgers during my lifetime, but most of them have been cooked in only a couple of different ways, either on a grill or flat-top.

But when I recently saw an episode of Burger Land where the host made a stop in Memphis, I realized there was another cooking method I needed to try… deep-fried.

I had read about the Dyer’s famous deep-fried burgers from a fellow food aficionado Seth over at Best Memphis Burger. It wasn’t until I saw him actually enjoying one with the Burger Land host though that I REALLY wanted to try one.

The grease used to fry the burgers at Dyer’s is over 100 years old and is “strained daily.” It is so guarded that it has received armed protection when it has been transported to new locations.

A group of my coworkers headed into Dyer’s on a Tuesday night after my company hosted an event on Beale Street. The place was busy, but not packed so we were able to get a booth right away.

I had learned from Seth’s review and Burger Land (see the Dyer’s part of the episode here) that the patties are pounded pretty thin and it’s best to get a Double Double (two meats, two cheese) to have the proper meat-to-bun ratio.

We all ordered the Double Double combo, which are served with mustard, pickles and onions. When I’m at a place like this I usually try to get mine the “original” way in order to get a true taste, but this time I got mine with mayo, ketchup and onions.

Unfortunately our waitress, Dimples, swapped my order with a coworker who had ordered mayo and ketchup. Because I was busy setting everything up to take pictures of my burger, I didn’t check to make sure I had the correct one. The coworker that got my burger was thoughtful enough to let me know, when he had about two bites left. 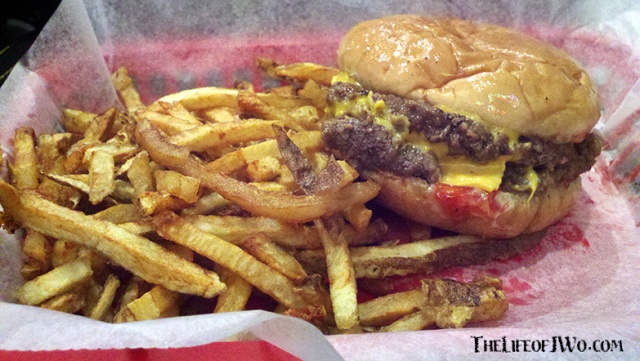 Dyer’s Double-Double, with mayo and ketchup (should have had onions).

I was so excited about being able to dig into my first Dyer’s burger that I didn’t really care if it had onions or not.

The burger came wrapped in a thin butcher-type paper and I was expecting it to be a LOT greasier than it was, even when I unwrapped it. You can see the sheen of grease on the bun, but by no means was it dripping or soggy and the bun held together throughout.

I was actually surprised at the size of the patties too. Maybe they plumped up in the grease, but they definitely weren’t as paper-thin as I saw them pounded on TV.

I was surprised again when I bit into the burger as it was very moist. I was expecting to feel grease oozing out of onto my fingers as I took my first bite, but that never happened. The patties were firm and full of flavor. It wasn’t until I was about halfway through that I thought about how the onions would have added an extra layer of flavor and texture.

The only thing I was disappointed in were the french fries. They could have been left in the fryer a few seconds longer as they were a little limp and the greasiest thing on my plate. Despite being a little underdone, I ate all of mine, as well as half of a coworker’s.

Out of the Frying Pan, Into the Fryer

Earlier this week we were talking about our Dyer’s experience and figured a week was long enough for the grease to make it through our systems, so we decided to hit another Memphis fried burger institution, Ubee’s.

Ubee’s is located just off the campus of the University of Memphis as evidenced by the school’s colors in the decor.

Once again, everyone in the group ordered the Two Timer, Ubee’s version of the Double Double. Like Dyer’s, Ubee’s burger came with mustard, onions and pickles so that’s how I ordered mine.

Ubee’s has an open kitchen where I could watch our burgers formed into patties and dropped into the big, black skillet of grease, which is rumored to be made from the same grease as Dyer’s.

Our burgers marinating in the grease at Ubee’s.

Our burgers are almost done.

As I watched our burgers being prepared, one difference I noticed is that, unlike Dyer’s, Ubee’s doesn’t double-dip the patty back into the grease after the cheese has been placed on top.

The result wasn’t really noticeable aside from the bun not having the extra sheen on top. What was noticeable was the difference in the patties, as Ubee’s weren’t quiet as thick as Dyer’s.

That’s not to say it wasn’t a good burger, because it was very tasty. Some of the pickles fell out of the burger as I was eating it and there was a LOT of mustard which at times was all I seemed to taste. I’m thinking that next time I’ll get ketchup and onions instead.

Unlike Dyer’s, Ubee’s bun didn’t make it through the entire process unscathed as the bottom bun was falling apart by my last 2-3 bites.

Ubee’s fries were AMAZING. They weren’t greasy at all and there wasn’t a limp one in the bunch. These freshly cut potatoes had a lot of flavor and I could have eaten another helping if I had time. Ubee’s also offers tater tots, and as much as I enjoyed the fries, I think I’ll go with those next time. Tots aren’t offered everywhere so I have to get them wherever I can.

While deep-frying isn’t necessarily my preferred choice for cooking a burger, I wasn’t disappointed in either variety.

I felt like Dyer’s had a better tasting, and thicker, burger, while Ubee’s had far better fries. It would be interesting to see how the fries differ at each place based on customer volume (Dyer’s was busy, Ubee’s was not).

The key to eating at Dyer’s and Ubees is to NOT do it too often, especially for someone who has just turned 40, like me. It’s also important to try to NOT think about what’s being done to the burger before it arrives at your table.

There’s a reason Dyer’s made Esquire magazine’s “60 Things Worth Shortening Your Life For,” so burgers from places like these are best consumed infrequently.

These are the kinds of burgers that are best eaten after a night of indulging in a variety of adult beverages, which is why it’s no surprise that they exist on Beale Street and across the street from a college.

Grease is the only cure for a hangover.

3 Responses to Greased Lighting: My Taste of Deep-Fried Burgers