There’s Potential in The Checkered Cow

I have constantly been trying new and exciting places to eat since we arrived in Memphis. Most of the times the new ventures are a success, sometimes they aren’t.

This past Friday was one of those unsuccessful ones. Well, kind of…

Courtesy of The Memphis Flyer.

I read about the burgers at The Checkered Cow in a recent edition of the Memphis Flyer and talked my coworkers into trying it after showing them the menu, which has more than 19 burger combinations.

The Checkered Cow is a burger concept launched by D’Bo’s Wings and is not a standalone establishment at this point. Their menus are an additional option inside the four D’Bo’s Wings locations.

This past Friday I loaded in a car with three coworkers and headed to the spot nearest us, the Whitehaven store, ready to try some of The Checkered Cow’s interesting burger combos.

Their menu is littered with burger creations like the Checkered Skirt, the Oozey, the Memphis, the Fried Pickle and the Nacho Burger, with actual tortilla chips on it. They all sounded good but there was one in particular that caught my eye, the Elvis is N the Building burger.

Considering we were just down the road from Graceland, I felt like I HAD to get the Elvis burger, which came with “peanut butter” and bacon. None of us could figure out why peanut butter was in quotes. Hmmmm….

Since I knew what I wanted, I was the first to order and was told it would take 15-20 minutes for them to make our burgers. Because we only had an hour for lunch we decided to get everything to go since we had spent nearly 20 minutes just to get there.

Unfortunately it took twice that long.

I know D’bo’s talks about not being a fast food place, but I can’t for the life of me figure out why it would take 40 minutes to make a burger.

At one point there were 13 people in the place and only ONE person was actually eating.

We finally all got our burgers and headed back to the office, which meant we weren’t really going to be enjoying them hot off the grill.

Here’s how they looked before we headed back to work.

The Oink and Moo burger from The Checkered Cow. 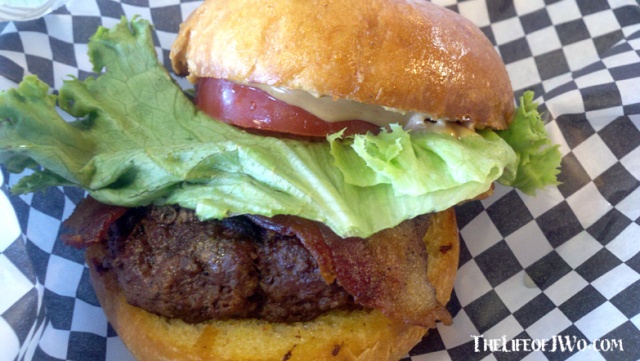 The Elvis N the Building burger.

The hand-formed patties, which had more than just ground beef (onions and maybe breadcrumbs) inside them, were good but mine was not quite as big as their “toasted gourmet buns,” something I like in a burger.

The buns were better than the average Wonder buns used at Dyer’s and Ubee’s, and I think they would have been even better had we been able to eat them immediately.

Despite the 40-minute wait time, the burgers weren’t as dry as I expected. The peanut butter wasn’t overpowering and the bacon had good flavor, although it was no longer crispy by time I got to taste it.

I don’t normally get lettuce on a burger, but I did this time to add a crunchy texture. I was very happy it was a nice leaf instead of the shredded variety.

No one added any additional condiments on their burgers, most of which were eaten as I drove us back to the office. To me that’s a testament as to how good the burgers were, or it could simply have been that everyone was starving.

I don’t know what it is with me and bad french fries recently, but this makes two out of the last three times that I’ve been disappointed.

The waitress asked if I wanted regular or seasoned fries, so I asked which ones she preferred. She recommended the regular ones so that’s what I got.

Not only did they not come out with my order (had to wait another 5+ minutes for them) but they were under done and very plain, just run-of-the-mill fries.

I know D’bo’s has just launched The Checkered Cow and is still working to get it off the ground, eventually hoping to have them in separate locations, so I’m willing to give them another chance.

I can see the potential in what they are trying to do and while they fell short in the service side of things, none of us actually complained about how the burgers tasted, just that it wasn’t worth waiting 40 minutes for them.

Unfortunately due to the extra long wait and distance from the office, I won’t be able to add The Checkered Cow to our lunch rotation at work. However, I will take Tammy to the one near our place to see if my recent experience was just an isolated incident.

I’ve got my fingers crossed that my future experiences with The Checkered Cow aren’t like my last one because they have a lot of burger offerings that I want to taste.

1 Response to There’s Potential in The Checkered Cow