Back in June, I wrote about how I have a Food Bucket List that is helping guide me in my attempt to eat my way through Memphis.

As I mentioned in the original post, Kerry, from over at I Love Memphis, gets all the credit for coming up with creating my culinary roadmap. 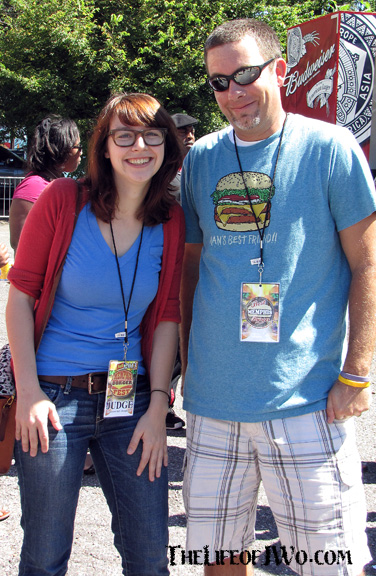 Kerry is ready to get away from me. I can barely contain my excitement.

I actually got to meet Kerry at Best Memphis Burger Fest. I was so excited to meet her, but I think it freaked her out a little that I wanted to take a picture with her.

I went on to explain how I have her “100 Things to Eat in Memphis” lists printed out and hanging on my fridge as my Memphis Food Bucket List. I then asked if I could get a picture with her.

Tammy snapped a couple of pictures, I talked with Kerry a few seconds and she was off to judge the Best Memphis Burger category.

I know she may not feel this way, but to me Kerry is a local celebrity and I was so excited to meet her. Even though she’s no longer at the helm of the I Love Memphis website, it’s her lists that have me eating at places all over the city, most of which I’d never know about. Thank you Kerry, sorry to have been so creepy.

Below are all 200 items from Kerry’s lists. I’ve crossed out the items I have eaten and/or the places we have visited.

I’ve listed my favorite, worst, etc. items at the end of my lists.

100 Things to Eat in Memphis

100 More Things to Eat in Memphis

Favorite Item: I love food so much that it’s really hard for me to pick one item as my favorite, so I’ll do it like this.

Most Disappointing: Pork Chop Sandwich from Tom’s BBQ
The pork chop was very flavorful, but I’m sure it’s a good idea to have a bone-in pork chop in a sandwich. I’d preferred to just have the chop and two slices of bread.

Most Surprising Item: Maple Bacon Brussels Sprouts from South of Beale.
The were so good that I would seriously consider just ordering a double order of them as my meal.

Longest Wait: Jerry’s Snow Cones
It was a 20-25-minute drive, each way, and a 45-minute wait once we got there. From what I’ve been told there’s a wait like that almost every night. While Jerry’s was REALLY good – I had 4 brain freezes before we were five minutes away – we won’t go back very often just because it takes so long. 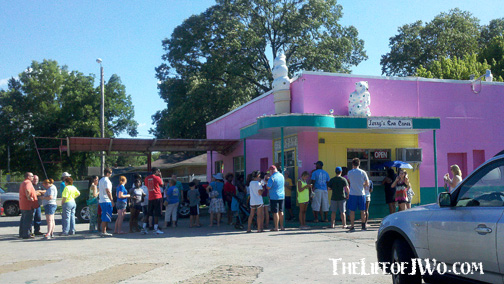 Spiciest: Gus’s Fried Chicken
Unfortunately I can’t take Tammy to Gus’s because the chicken is just too spicy for her. She had a tiny bite of a tender I brought home and her mouth was on fire.

Place Visited the Most: R.P. Tracks
A coworker LOVES him some R.P. Tracks and because of that we’ve been there at least 7 or 8 times. To be perfectly honest, I’ve actually lost count. However, we haven’t been there in at least a month so we’re due for a trip soon.

Most Looking Forward to Tasting: Lobster Pronto Pup from Rizzo’s and/or the Lobster Slider from Slider Inn