Whether it’s taking home the ugly chick/guy from the bar or making someone think they can dance like (insert more modern dancing machine here), we all know that drinking often causes people to make bad decisions.

While some decisions aren’t as bad as others, they never seem like a bad decision at the time.

Such was the case Saturday night for Tammy. 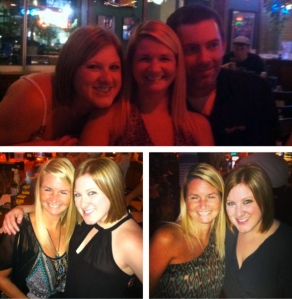 We were closing out her birthday weekend at our usual weekend watering hole, the East End Grill. We usually go there on Friday nights, but that’s when we went to Flight for Tammy’s birthday dinner, so we decided to have everyone meet us at EE Saturday instead.

Tammy opened a few gifts from some of our friends (aka other regulars) and we all sat in our usual places around the bar, while the Ole Miss-Alabama game was playing.

I made some new friends during the game and eventually introduced them to Tammy. We bonded over food (big surprise) and sat around talking way past midnight, which was a lot later than we had anticipated.

We said our goodbyes to everyone and headed out to the parking lot. That’s when Tammy’s bad decision making started and it’s not the first time it has happened.

Is it a Wendy’s or Taco Bell kind of night?

When we are out late, Tammy sometimes get hungry, hungry for bad things.

Most of the time it’s Taco Bell.

But since she had already made that bad decision on Thursday night, Tammy’s actual birthday, she opted for a late night snack from Wendy’s instead.

I pulled into Wendy’s and got Tammy a Junior Cheeseburger Deluxe, with no onions or mustard. We got our food and headed home. Before I even got around the building, Tammy had the burger out.

As she was unwrapping it the car was filled with the smell of armpits and feet and I knew they didn’t take the onions off.

Tammy: There’s prolly mustard on it too.
Me: Yup, there sure is. How hard is it to get that right?
Tammy: I know, right? But right now I don’t care.

Kinda how Tammy was holding her burger on the way home.

She slurred and mumbled over a few words that I couldn’t understand before she took her first bite. She was three bites in before I got out of the parking lot.

Tammy: This burger is horrible.

I look over and she’s holding it less than a foot away from her face.

Tammy: (takes another bite) The meat is all dry and hard.
Me: Yeah?
Tammy: Yeah, (bite) it’s like the worse burger ever (bite) and I can’t stop eating it (bite).

According to Google Maps, we live 0.9 miles away from Wendy’s and she devoured that burger before I even made it to our complex.

Even though we left Flight stuffed, both of us were craving something sweet. So we were racking our brains trying to come up with a place where we could stop on our way home

At some point during the drive home, the wine Tammy had consumed started to kick in. I could tell her speech was getting a little more slurred and some of her gestures looked as if she was underwater.

I found it mildly humorous, but didn’t think much about it at the time. It wasn’t until we got home that it became HILARIOUS.

We pulled into our complex and Tammy wanted to check the mail to see if she had any birthday cards, which of course she did.

I let Savannah out when we got home and noticed that Tammy was crying when we came back inside. She had gotten a card from Ashlee (daughter) and it was so sweet it left her in tears.

She was still sitting on the edge of the couch, wiping away tears.

Tammy: Let me read it to you.

What follows is her reading the card for the second time.