We recently hired a new videographer (I’ll call him Devon) where I work and as you’d expect, he’s a big movie lover.

Devon is always talking about how so-and-so movies were so great and he even makes special trips to Best Buy to stock up on the new releases of Blu-Ray’s. 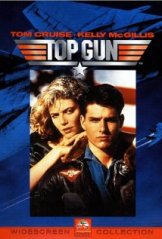 He was all excited about the Grammys or Oscars, whichever one is about movies, and was talking about how he wants to see some of the nominees. He looked at me like I had a third-eye on my forehead when I said…

Me: If a movie was nominated for something then chances are I’ll never watch it.

He’s reacted with surprised and shocked sounds when I told him I haven’t seen certain movies (Pulp Fiction, Top Gun and Kill Bill, just to name a few).

I sent him my explanation about how Movies and Me Don’t Mix, but that hasn’t stopped him from trying to convert me into a movie watcher.

I have to give him credit for trying to use some of my “List of Demands” to entice me into watching movies. His favorite bait to use is the Nudity Clause. 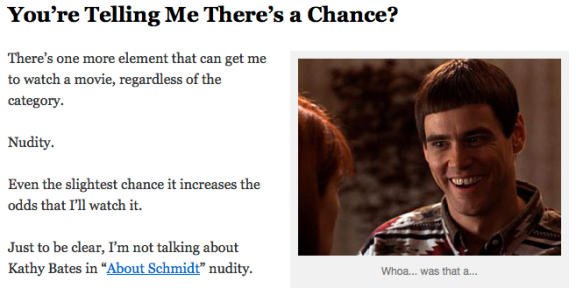 I can’t remember what movie he was talking about, but his selling point was that Cameron Diaz “has sex with a car.”

Devon: You’d like (whatever movie he was talking about), Cameron Diaz has sex with a car in it.
Me: … (stares blankly at him)
Devon: Not with the hood or anything, but with the gear shift.
Me: That doesn’t do anything for me.
Devon: Really?
Me: Yeah. Plus, Cameron Diaz looks like she’d stink.

OK, maybe not ALL the time, but there are times when she totally looks like she’d smell like Bigfoot’s taint. Same goes for Pink and Christina Aguilera, but I think they are on an entirely different Level of Stink than Cameron Diaz.

Turns out I’m not the only one who thinks Cameron Diaz smells as she made this list and this one.

A little later in the day Devon brought up movies again and was even plotting a way to get me to watch more.

Devon: I’m going buy you one DVD a year for Christmas and after a few years you’ll have a nice video collection.
Me: No I won’t, because I’ll just give them away as gifts.
Devon: I’ll put notes in them that say something like “If you received this the Jason regifted it.”
Me: That won’t bother me.
Devon: You’ve got a Blu-Ray player right?
Me: (funny look) No.
Devon: Whaaaaatt? How can you not have a Blu-Ray player?
Me: Why would I? I prolly can count the number of movies we’ve rented in the past 3 years on one hand… definitely on 2 hands.

The look of shock on Devon’s face was priceless and I’m hoping my lack of Blu-Ray materials will end any further movie-watching discussions.