The First Time I Shot The Bird

When we moved into our new home, one of the things the previous owner left me was his BB gun collection that he used to keep squirrels out of his yard.

It’s been 30+ years since I’ve had a BB gun, so I’ve been very excited about having them. While I haven’t hit a squirrel (those fluffy-tailed rats are quick), I’ve come close to hitting one of the numerous geese that dare to enter our yard.

Mostly I stand out on the back deck and shoot at the trees, or see if I can hit the pond (roughly 50+ yards away). Tammy hates when I practice.

Tammy: Stop doing that. There’s going to be BBs all over the yard now and they are gonna shoot out everywhere when you mow.

Apparently she envisions the Allstate Mayhem Mowing commercial is going to happen, except instead of rocks, tiny BBs are going to pepper the house.

I have broken out the three BB guns (two functional and one really old one) for everyone that has stopped by to visit, but no one has been that excited about them until last night when our friends Eric and Mary came over.

We were only a few bites into our pizza when I brought up the rifles and Eric immediately wanted to go outside and shoot them. We spend the next 30+ minutes shooting BBs at targets in the yard. Eric was wanting to hit something living, but there were no squirrels or geese to be found.

When he wanted to take aim at one of the robins in the yard, I drew the line.

Me: No birds.
Eric: Awww man.
Me: No birds. Squirrels and geese are fair game, but I got no beef with the birds.

I then proceeded to tell him why.

I was maybe 8 or 9 years old and I was roaming around my backyard armed with a BB gun like I was Ralphie from A Christmas Story.

I had filled my rifle with as many BBs as it would hold and was popping off shots at various objects in the yard, pretending I was mowing down the bad guys. 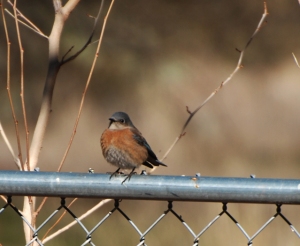 I had only been shooting at items like trees, pieces of wood and occasionally the swing set, but that changed when I saw a bird sitting atop the chain-link fence on the opposite side of the yard.

That bird was just sitting there not bothering anybody or anything, but something inside my head said I should see if I could hit it.

I raised my rifle, got the bird in my sites, steadied myself and pulled the trigger.

I lowered my rifle and gasped…

I was stuck in one of those slow-motion moments that you see in the movies as I replayed what had happened.

I staggered a little and took a couple of steps backwards.

Then I dropped my rifle and sprinted around the house to where I had seen the bird drop like a stone. My mind was racing with crazy thoughts.

Did anyone see me?
What would I do with it?
Should I throw it in the garbage?
Would I have to touch it?
Mom was going to kill me…

As I rounded the corner of the house I started checking the ground, fully expecting to see a gruesome sight of blood, guts and feathers. My heart was pounding in my chest as I slowly and cautiously stepped closer to where it had been sitting. The last thing I wanted to do was to hear and feel it crunch under my feet.

It felt like I looked the rest of the afternoon for that bird, but never found a single trace of it. Apparently I had just knocked it off its perch, or it just flew away, but it wasn’t dead. Still, I didn’t speak about my Shooting the Bird incident to anyone for a very long time and don’t remember playing with my BB gun much after that.

Maybe that’s why I got no beef with the birds today.

But squirrels and geese a different story, for now anyway.

2 Responses to The First Time I Shot The Bird