We woke up today and headed downstairs to the hotel lobby for breakfast. It was nothing special, except it being free.

After breakfast we heading out to Citra, Florida to visit Tammy’s family. Each time we’ve been down to visit them I’m reminded of how “non-country” I am.

Despite being from Mississippi, I’m not anywhere as close to being as backwoods as Tammy’s family in Citra. I don’t mean that as any disrespect, because her Uncle Mike and Aunt Bobbie are some of the nicest people you’ll ever meet.

But they live back in the woods… As in no paved roads and no driveways. 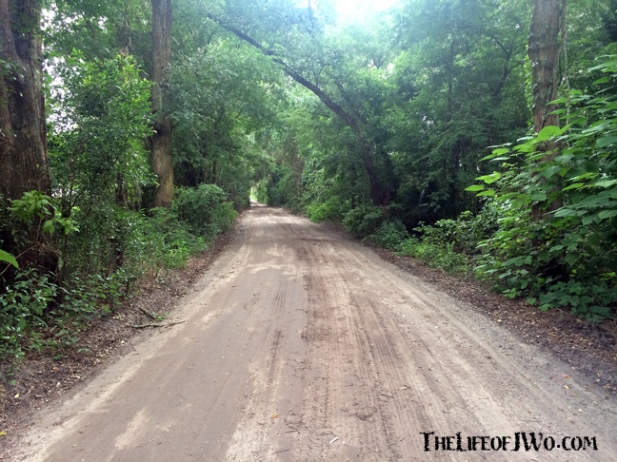 This is one of the roads to Tammy’s family in Citra. 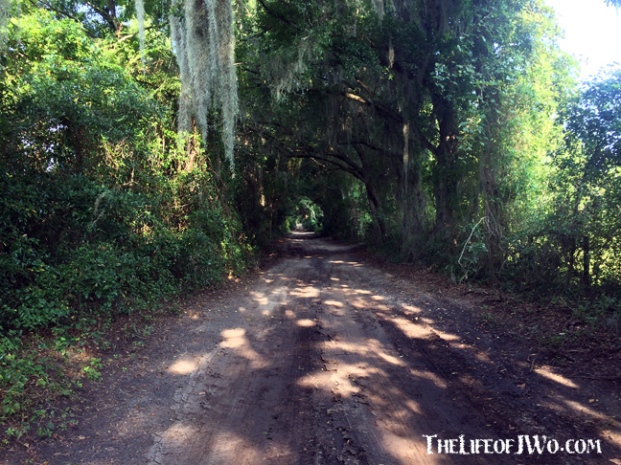 How creepy is this, right? I’m pretty sure a horror movie or two has been filmed right here. 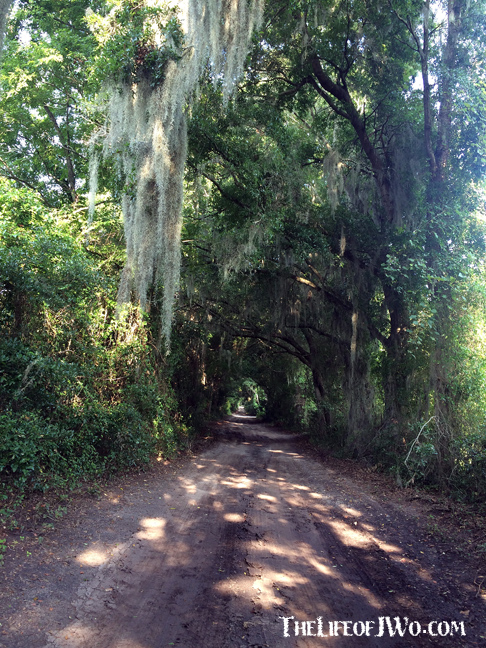 If your car breaks down here then you’ll never be seen again. 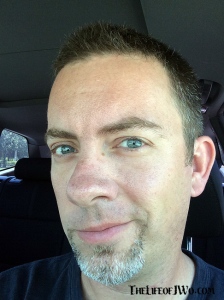 I spend a couple of hours with everyone before heading back into Ocala to get a haircut. I found a Sport Clips near our hotel, punched the address into my phone and was on my way.

Even though I was a few weeks early in getting clipped, I figured I’d go ahead and get it done so I wouldn’t have white strips on the back of my neck if I got it cut after a week at the beach.

On my way to the Sport Clips, I was thinking about food, imagine that.

Me: I could go for some Lo Mein.

I knew we had leftover food (from our horrible experience at Chili’s) in the fridge in the hotel, so I decided I’d just eat that instead of looking up Chinese places.

That plan went out the window when I pulled up to Sport Clips and there was a Chinese place RIGHT NEXT DOOR.

How could I NOT get Lo Mein at that point, right?

I ran in, got my food and headed back to the hotel.

That’s when I noticed that my iPhone kept taking me THROUGH Ocala instead of jumping on I-75. Because I was taking the “scenic route” I not only got to see more of the city than I wanted to see, but I noticed that the red lights in Ocala took forever.

All I could think was how was THIS route faster than hitting I-75 where I could do 80+ for 3-4 miles?

Before I headed back to Citra, I headed to Wal-Mart to pick up a few things for the trip and was given a list of items to pick up for Tammy’s family to prep for everyone coming over after the funeral on Saturday.

Tammy had talked her cousin, Dixie, into making some homemade banana puddin’, which meant I needed to pick up a few of the ingredients. 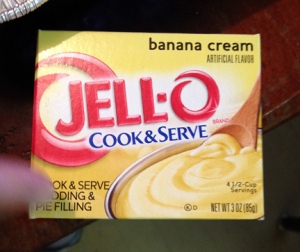 What Tammy sent me.

She sent me a picture of what the puddin’ I needed to pick up – “3 boxes of this exactly” –  along with a half-gallon of milk and some Nilla Wafers.

Tammy: 2 boxes of Nilla wafers, not generic like I got, but real Nilla wafers.
Me: Oh I know… Can’t make good ’nana puddin’ with fake wafers. That’s Bebe’s puddin’.

Turns out I didn’t really pay attention to the “this exactly” part of the puddin’ picture. Instead I focused on the flavor, but I didn’t know that until I walked into the kitchen at Uncle Mike’s house.

I reached in the bag and proudly handed Dixie the FIVE boxes of puddin’ I bought.

Dixie: Oh… (pause) you got instant.

I could see the disappointment dripping off her face.

Me: What? It’s just like the picture right? It’s banana cream flavor.
Tammy: It’s sposed to be Cook & Serve, NOT instant. That’s why I took the picture and said “this exactly.”
Me: Oh man… Really?
Dixie: It’s OK.
Me: Crap… I’m SO sorry. I can go get the right thing.
Dixie: It’s fine, really.

Aunt Bobbie reassured me that it was fine and all it meant was that it’d take less time to make, but I still felt horrible.

I felt a little better when I got to lick the bowl. 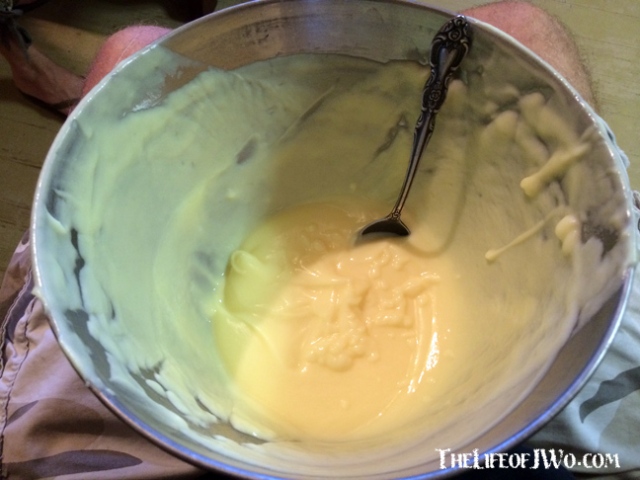 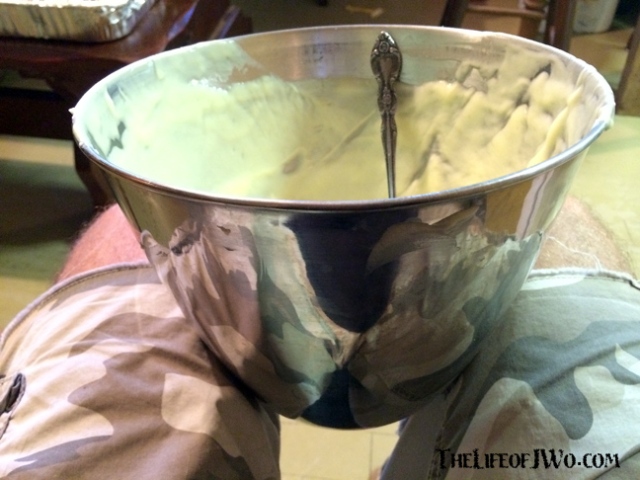 And ALL was forgotten when I saw the finished product. 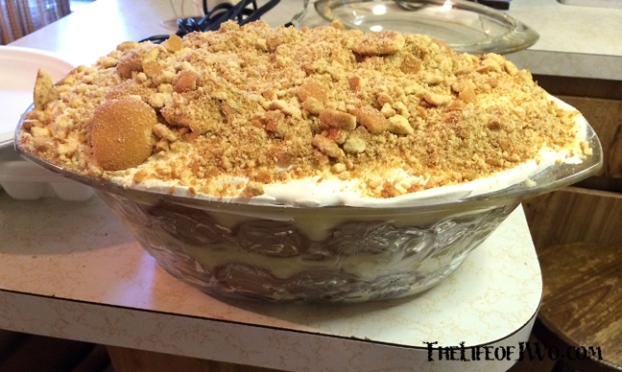 * Yes, I know there is no “g” at the end of pudding. That’s because I say puddin’. Tammy, on the other hand, says puddin“g” and I make fun of her for it.

We sat around talking with everyone over dinner, followed by Dixie’s banana puddin’, laughed over stories and talked about the events of tomorrow’s funeral.

Time seemed to fly by so Tammy and I had to get back to the hotel before it got too late. I didn’t want to be stuck on those roads after dark!!

We made it back to the hotel (I took I-75, no thanks to my iPhone) and crashed for the night.