When we moved to Memphis we knew we’d be giving up some things from Chicagoland like deep dish pizza, Chicago-style hot dogs and a good gyro spot in every city. But one thing we weren’t ready to live without was being able to watch Chicago Bears football every Sunday.

Since we lived in an apartment our first year in Memphis I started looking for a place to watch Bears games. I didn’t want to go to the typical spots like Buffalo Wild Wings or some other sports bar, so I took to Twitter to find out if there was a local bar where Bears fans met each Sunday.

That’s how we found The Green Beetle on South Main in downtown Memphis. Josh, the owner at the Beetle, is from Chicagoland and has one TV each Sunday dedicated to the Bears game. To read more on Josh and the history of The Green Beetle, check out what Foodie Memphis wrote (here).

During the 2013 season we’d hit the Beetle and found ourselves sitting in the same spot at the bar each week. We met some other Bears fans and always had a good time, regardless of whether or not the Bears won or lost. Oh, and we always ate very well.

If you aren’t interested in watching sports and are just looking for some incredibly delicious food, you won’t be disappointed in what Josh is serving. They have a burger with hash-browns and an egg on it that’s amazing. We’ve had appetizers, salads (Tammy), sandwiches, Po’ Boys, and catfish during our visits and have never been disappointed.

We had a blast in 2013, but this past Sunday—during the Bears-Falcons game—was the most fun we’ve had… Well, except maybe that time Brian Urlacher sat in front of me to watch the game.

Since the game didn’t start until 3:25, it threw our schedule off a bit. But we were still able to make it there before kick-off.

For noon games we can just walk up to our spot at the bar and sit—prolly because people are still in church. But this Sunday the place was packed and we had to (gasp) sit at a table.

Thankfully two spots at the bar opened up within five minutes of getting there and all order was restored.

We settled in at the bar and I ordered my first Goose Island 312 beer. What? No Coors Light? Well, The Green Beetle is having a contest where you get a ticket to win for each 312—a Chicago zip code & beer—and that ticket goes into a drawing to win this… 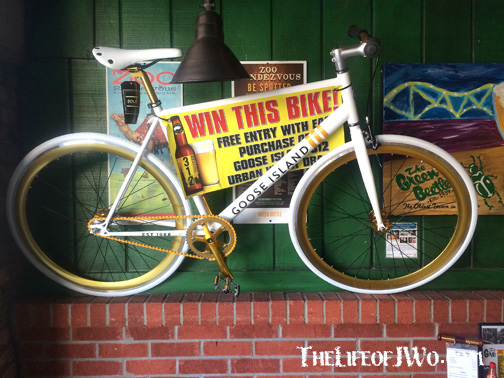 This will look even better hanging on my wall in the Man Cave.

Not long after Heather—the bartender whose real name is Felicia—handed me my beer our friend we met last season sat down next to Tammy. We didn’t know her name, but after talking with her this season I nicknamed her Shanghai—she spent two months there for work this summer.

We chatted for a while as we watched the game and even learned her “real” name is Claire.

Me: You don’t look like a Claire to me. I’ll still call you Shanghai.
Tammy: He will to.

I have been competing with Shanghai for the Goose Island bike the past few weeks and Sunday I was intent on getting more tickets than her.

I thought I was making ground until she batted her eyes and flipped her hair to get the ticket from the guy standing next to her. He promised me his next ticket, but apparently I didn’t bat my eyes enough because I never got a ticket from him. What a ticket tease.

Hanging out with Aurora during her trip to Memphis and The Green Beetle.

We ended up meeting a couple from Aurora, Illinois, who was in town for the weekend. Well, actually we only met the wife because her husband left to go back to the hotel, which of course prompted some questions from me.

Me: Where’d he go?
Aurora: He went back to the hotel. He was wanting me to find a place closer to watch the game so I didn’t have to walk so far back to the hotel.
Me: Why didn’t he stay?
Aurora: Well, he doesn’t really like football.
Me: (after I closed my mouth) What? And you let him put a ring on it?
Aurora: I know, right?

As the game went on a group of “seasoned” women, who had been to some blues festival in Arkansas, joined us at the bar. They were ranting and raving about someone, or something, called King Biscuit.

Me: When I hear King Biscuit I think of big, giant-ass biscuits. MMMmmmm… biscuits.

They all looked at me like I had just pooped in their purses. Turns out King Biscuit was the name of the blues festival.

One of the ladies asked everyone’s names and just raved when she found out Shanghai’s real name.

Fortunately I was able to turn things around and before long we were all bonding over beers, the Bears at the Beetle. 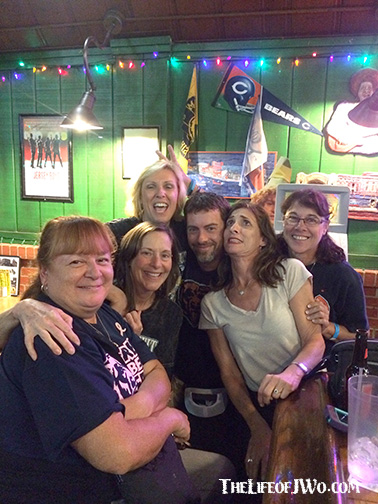 Hanging with the King Biscuit Crew at the Green Beetle.

Turns out I ended up with as many tickets as Shanghai at the end of the day—I won’t say how many. But considering she lives within walking distance of the Beetle, I’m pretty sure she’s more than a few up on me at this point.

So whether you are from Chicagoland or not, if you are in the Memphis area, swing by The Green Beetle and tell Josh “Hi.” You can even have a 312 beer, but you better NOT win that bike!