You Say It’s Your Birthday… and I Don’t Care

It’s a fact that as I’ve grown older, I’ve become more cynical and somewhat of a grouch when it comes to certain things, especially in the office.

It didn’t bother me at all when some of my coworkers said I reminded them of Red Forman from “That ’70s Show.”

The rest of them were still waiting to have their first significant “milestone” birthday since they turned 21.

So when I found out that one of the guys in the group where I used to sit — I was moved to another section for a long-term project — reminded everyone that today (Wednesday) was his birthday — and that they were going to lunch for it — I just shook my head.

I didn’t remember having anyone under the age of 10 in our group, but I’ve been in my new spot for a while so maybe I had missed something.

The reality is that I wasn’t really surprised. Well, let me correct that, I wasn’t surprised at who said it — he once had a day-by-day countdown to his one-year anniversary on a white board in the department.

I WAS surprised that someone closer to 30 than 20 (27) would feel the need to make sure everyone knew it was their birthday anymore. I guess I thought only girls still did that.

I told you I was getting cynical.

Granted, I don’t have a great memory, but I’m fairly confident that I didn’t feel the need to remind anyone about my birthday after I turned 21.

I see the little birthday reminders on Facebook all the time, but I’ve stopped posting Happy Birthday posts on anyone’s wall. I figure if I know you well enough then I’ll text or email you my Happy Birthday wishes.

But the Facebook reminders don’t bother me so much because it’s not like any of you are sending me messages to let me know your birthday is coming up.

I’ve always said age is just a number and that it’s how old you FEEL that counts.

I think farts are still funny (they always will be).

I make up dirty lyrics to songs.

I watch non-3D movies with 3D glasses when they show boobs.

I giggle when I hear the word “duty” (Duty means poop. It does…)

I hear dirty things in everyday conversations (see my Things I Have Overheard section).

It’s not that I dislike birthdays, or any of the people whose birthday’s show up on Facebook. I guess it’s just me not liking guys making sure his coworkers know it’s his birthday.

Then again maybe it’s me becoming a full-fledged curmudgeon in my old age. 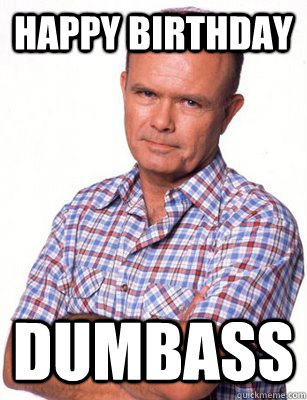