Why I Can’t Go On a Cruise

Just the other day, a freshly married coworker told me how he thought of me on his honeymoon. At first I was a little freaked out, but I allowed him to continue. He clarified by saying he thought of me because of all the amazing food he ate on his cruise.

He went on to tell about some of the great dishes, the buffets, the desserts, and how there was always something to eat.

It’s not the first time I’ve been told about how great the food offerings are on cruises, but my response is always the same.

Me: I once got motion sick on a child’s swing, so there’s no way I’m paying to go on something where there’s a chance I’ll be miserable.

Me getting sick on a child’s swing is NOT a made up story, nor is it exaggeration. One night a few years ago, Tammy was sitting, facing me in a swing set at a park.

We were just sitting there talking and barely swinging back and forth. But in less than five minutes – prolly more like three minutes – I started feeling nauseous and told her we had to stop moving.

While I totally killed the romantic vibe we had going, at least I was able to stop it before things got as bad as they did during a trip with Jake to Six Flags Great America.

Jake loved going to Six Flags, so I took off work one day and we headed out. It was early in the season so there weren’t many people there and we both were excited. While I hated things that went in circles like the Tilt-a-whirl and the Teacups, I loved riding roller coasters.

Our first ride of the day was the Superman: Ultimate Flight. On this coaster you start by siting down before being positioned parallel to the track to simulate flying.

How you start Superman Ultimate Flight

How you ride Superman Ultimate Flight. 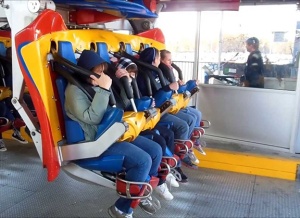 I knew something was wrong at this point.

I remember thinking how cool this was as we took off, but something happened mid-flight that changed everything. By time the ride was over I knew something wasn’t right, but I decided to do my best to not let Jake know.

When we were returned to our upright position I could feel myself sweating and was taking deep breaths in an attempt to have a “reversal of fortune.” It was so bad that I didn’t even care if I lost money.

Jake: (once we were upright after the ride) I think some money fell out of your pocket.
Me: Just leave it.

I never even looked down to see what actually had fallen out of my pocket, but I knew if I bent over to get it then the McGriddle I had for breakfast was coming out.

Turns out I didn’t even need to bend over for that to happen.

Thankfully I was able to make it just past the start of the exit before my stomach revoked every piece of food in it. This had never happened to me before, so I started rationalizing by saying things like “it must have been a bad McGriddle” or “I think my contacts are bad.”

I kept telling myself, and Jake, that it had to have been a bad McGriddle or something. Regardless, I sat out a few rides Jake wanted to go on and opted for the tamer ones instead.

By the end of the day I was feeling a little better, but still not 100%, and opted to ride with Jake on the American Eagle, which was an old wooden roller coaster. Since there weren’t any crazy loops or corkscrews I figured I would be fine.

Turns out I was wrong.

When the ride stopped I was covered with sweat and slowly walked down the exit, which was an extra-long raised walkway. I told Jake I’d catch up with him while I gripped the rail for support. At some point a sound emanated from my body that I thought was only audible to me.

Turns out I was wrong… again.

The girl walking a few yards in front of me turned around to see what the sound was. I’ll never forget the look on her face when she saw me. I heard her gasp, actually it was more like an “ooooooohhhh.”

She turned around and briskly put some distance between the two of us. I couldn’t blame her because I prolly looked like a sickly, pale, barely walking zombie – this was years before zombies were “cool.”

Jake and I called it a day and headed back home with me still trying to figure out what had happened. Once the Swing Incident occurred I knew my non-motion sickness ability was gone and I haven’t been on a roller coaster – or swing – since.

I can’t even really look at Tammy when she’s rocking in her recliner because it makes me dizzy!

That also means there’s NO WAY I’m paying to go on a cruise where something like that could happen, no matter how good the food may be.

I know there are motion sickness bands, shots, patches, etc., but I still don’t want to risk my hard-earned money for a week-long rolling, motion-sick filled vacation.

However, if Norwegian Cruise Line, Royal Caribbean, or Carnival wanted to send me on a cruise (as in free) to prove it’s not as bad as I think then I wouldn’t turn them down.

Until then, my no roller coasters, swings, cruises, and McGriddle ban will be in place.