The day my love of food cost me

When I hear that new food spots open in my town, my interest is peaked. When those spots aren’t another chain and are instead locally owned, I get excited. So when I recently found out about a new Mexican ice cream store that had opened where I live, I knew I had to check it out.

That’s what I did on a recent Sunday afternoon. I ran to Lowes to get paint for my Man Cave and on my way home stopped at Frutanas to get ice cream — my reward for finally picking a paint color.

Once I found the new store, I headed inside and soon settled on a strawberry cheesecake cone (for me) and two paletas (Mexican popsicles), a coconut cream for my wife, Tammy, and a strawberries and cream one for myself — my reward for actually taping off and/or painting something once I got home.

With my cone in one hand and my bag of paletas in the other, I jumped in my car and headed home. I was crossing over a bridge — while working on my ice cream cone—w hen my car drifted into the middle lane.

Just as I started to correct my driving line, I heard a large whooshing sound. It was as if someone had dumped a ton of gravel on the road. I told myself that’s what it must have been since I could see rocks in the middle lane.

It didn’t take very long for me to figure out that the sound I heard was actually all of the air rushing out of my left rear tire. Since I was only about 2 miles from home, I briefly thought about just driving there instead of stopping. But once I saw the trail of darkness on the road behind me, I knew I needed to pull over.

I quickly took the first right and stopped about 30 yards from the intersection. It took a few seconds for me to realize I had just pulled into a neighborhood built around a golf course — I was closer to a tee box than the main road.

I grabbed my phone and called Tammy.

I got off the phone with her and continued to eat away at my ice cream cone, which had been slowly melting since I stopped. I watched golf carts stop at the tee box near me where golfers get out, and proceeded to take practice swings as I licked away at my ice cream.

It was about this time I realized I must have looked like a complete TOOL, just sitting in my car (a BMW X3*) with a flat tire eating ice cream while I watched people play golf.

* For the record I’m NOT a BMW guy. I had a Jeep Wrangler for 12 years, but the cold, brutal Chicagoland winters wore me down. I got tired of wrapping myself in a blanket to drive to work.

It took about 4.2 seconds for me to finish my cone and jump out of my car so I could begin remedying my situation. 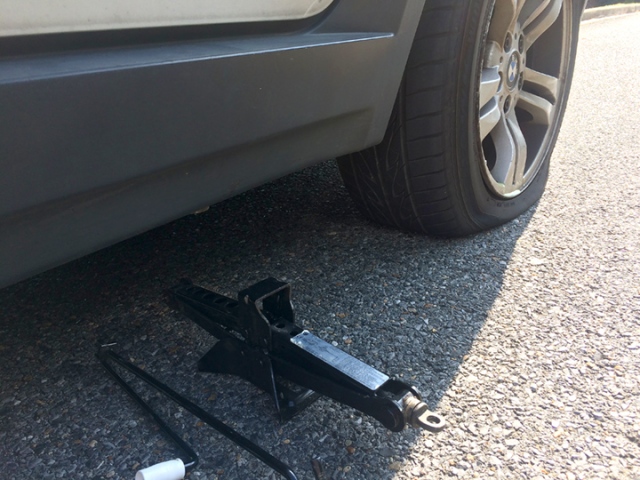 Seeing that this was the first flat tire I’d had in this car, I wasn’t entirely sure where my spare was located. Fortunately it was where I thought it would be (mounted under the rear of the car), but I still didn’t know how to get the spare out.

Thankfully several years ago I had printed out the owner’s manual and crammed all of the more than 130 8.5 x 11 pages into my glove box, so it didn’t take long for me to get the spare dropped. After the spare was down I quickly got the car jacked up so I could remove the flat tire and slap on the spare.

Because my car is 11 years old, I had some concerns about the condition of the spare tire. Not only had it never been used, but it had spent roughly 7 years under my car being subjected to the snow, ice, and salt that cover the Chicagoland roads from October to March.

My fears grew as I lowered the car down on the spare. I could see the tire wasn’t as full of air as it should have been. I held my breath with each turn of the jack, hoping I’d have enough air to make it to home so I could borrow my neighbor’s air compressor. 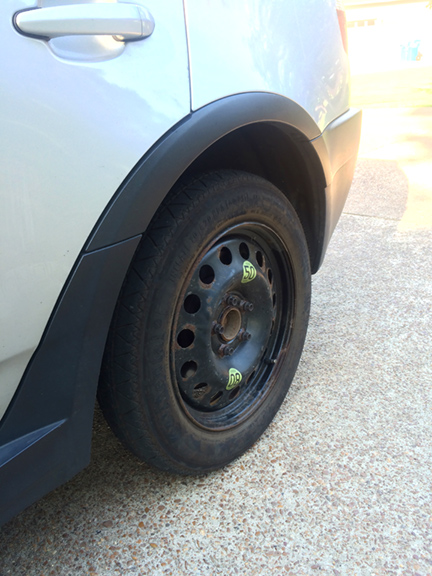 Spare tire after it was aired up at the neighbors.

Once I felt that I had enough air to finish the 2-mile drive home, I threw the jack and the flat tire in the back of my car, turned on my flashers, and slowly crept back to the house.

I walked into the kitchen to give Tammy her coconut cream paleta, which surprisingly wasn’t as melted as I thought it would be, and could tell she was shocked to see me.

As I made my way across the street to the neighbor’s house, I thought about what had just happened. I went from being down about how wanting to try a new ice cream place had cost me a tire, to feeling pretty good about myself for impressing my wife with my tire-changing ability.

Seems to me a trip back to the ice cream shop is in order — my reward for impressing my wife.