For years my wife and I have been engaged in a coffee war. Well, it’s not so much a coffee war, because we both agree on what coffee to use. Maybe war is too harsh, it was more of a skirmish over a coffee delivery device.

The disagreement stemmed from Tammy’s desire to have a Keurig, while I was fine with our standard coffee pot system.

We drink coffee every morning, but by no means would I call us hardcore coffee people. I don’t wake up needing coffee and don’t drink any until I’m walking out the door for work. I was perfectly fine using the coffee pot we’d had for years.

I had successfully fended off Tammy’s Keurig requests by pointing out that the cost of an 18-pack of K-Cups was more than the giant container of Maxwell House we get at Costco.

So when I saw Influenster wanted me to take a coffee survey, I didn’t think much about it. I answered all of the questions, hit submit, and figured I wouldn’t hear anything back.

Boy was I wrong.

A few days later I got an email saying it was time to wake up and smell the coffee because I was getting a brand new Keurig, along with K-Cups, and accessories.

I couldn’t believe it and couldn’t wait to tell Tammy. Of course she was excited. After years of me denying her coffee from a Keurig, this felt like a miracle from the coffee gods.

Oh yeah, I forgot to mention all of that I’d be getting it FOR FREE!! That’s right, FREE.

Influenster as defined on Wikipedia:

Influenster is a product discovery and reviews platform that uses social media analytics to measure its users’ influence on social media. More specifically, Influenster quantifies its users’ influence via “Social Impact”, which tracks the number of friends, followers, or subscribers a user has. Based on a user’s Impact score and demographic, he or she can then be invited to campaigns run by Influenster featuring digital and material rewards from consumer brands, most popularly the “VoxBox” or a boxed shipment of products to sample and complete a survey about.

I’ve gotten other items from Influenster before, but it was mainly hair salve and deodorant. I wrote about the last deodorant Influenster sent me because it was so good. 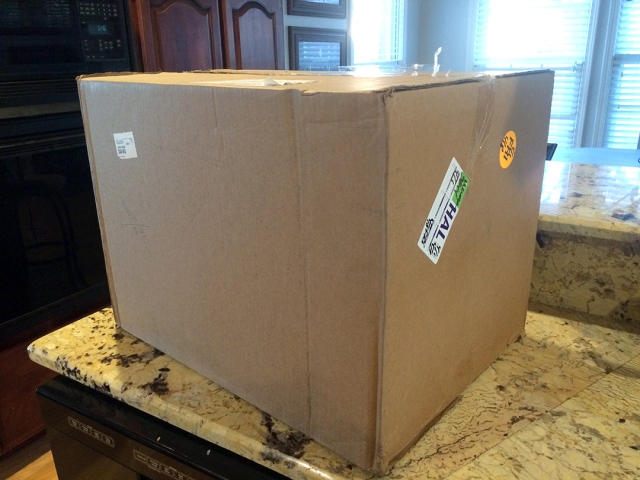 How my Keurig VoxBox from Influenster arrived.

I figured the Keurig VoxBox would be good — it’s a FREE Keurig after all — but when I opened up the box I couldn’t believe what all it contained. 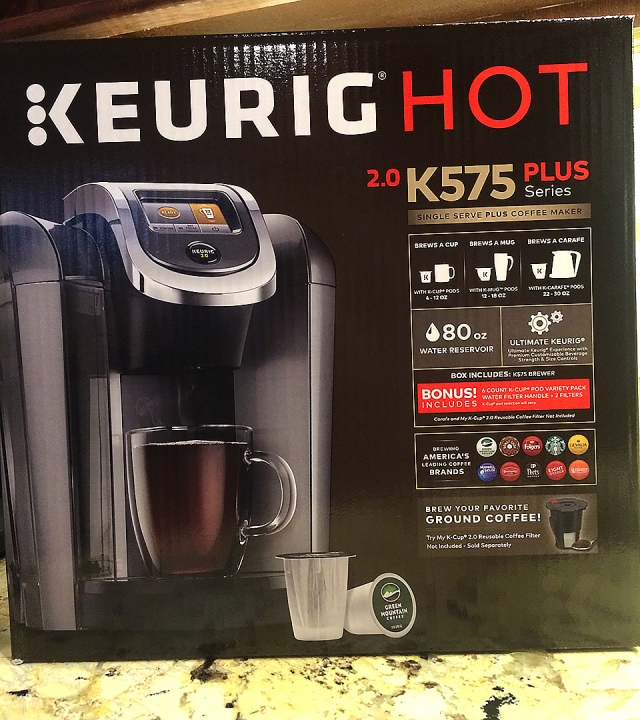 I’d have been completely happy if that had been all I gotten, but that was just the beginning.

There was also a Keurig 2.0  carousel, reusable K-Cup, and carafe, which was called a KARE-ah-FAY because that’s how someone on YouTube said it. 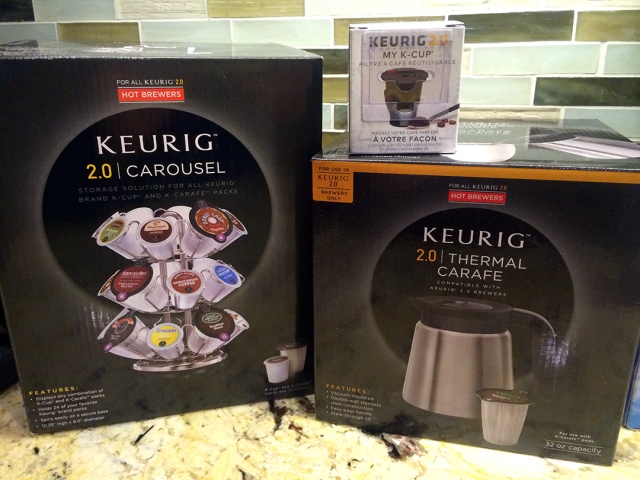 Again, I’d have been happy if the box was empty at this point.

Also included were two 12-pack K-Mugs (French Vanilla and dark magic) which brew up to a 16-ounce mug, and an 8-pack K-Carafes (Hawaiian Blend) for when you need a more traditional “pot” of coffee. 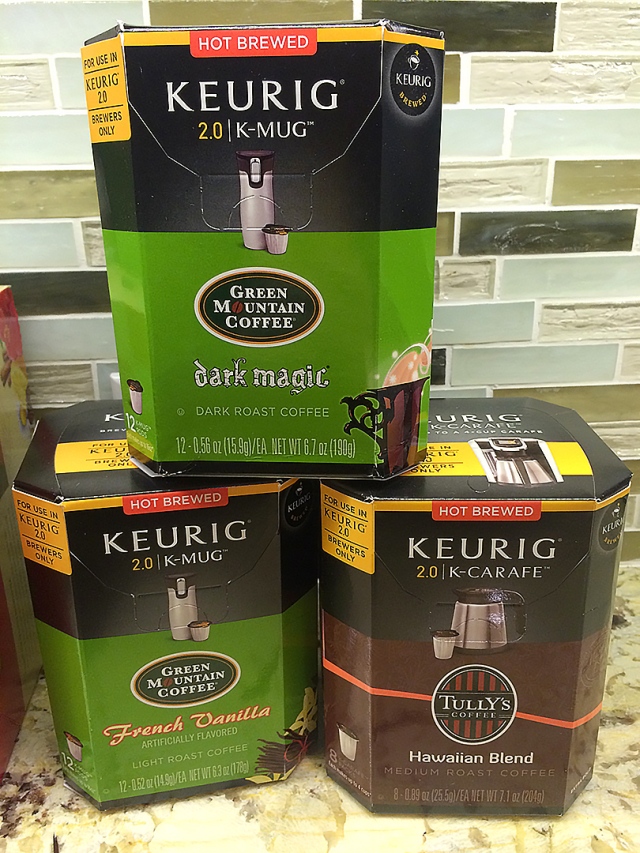 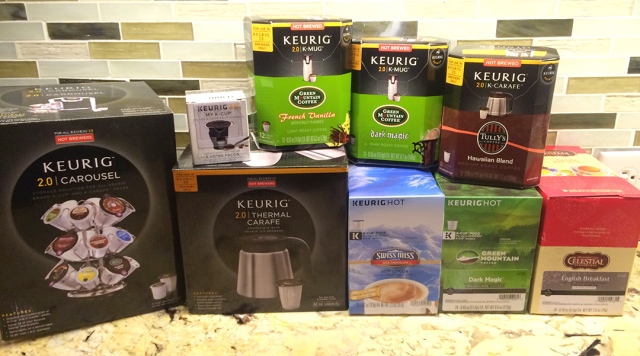 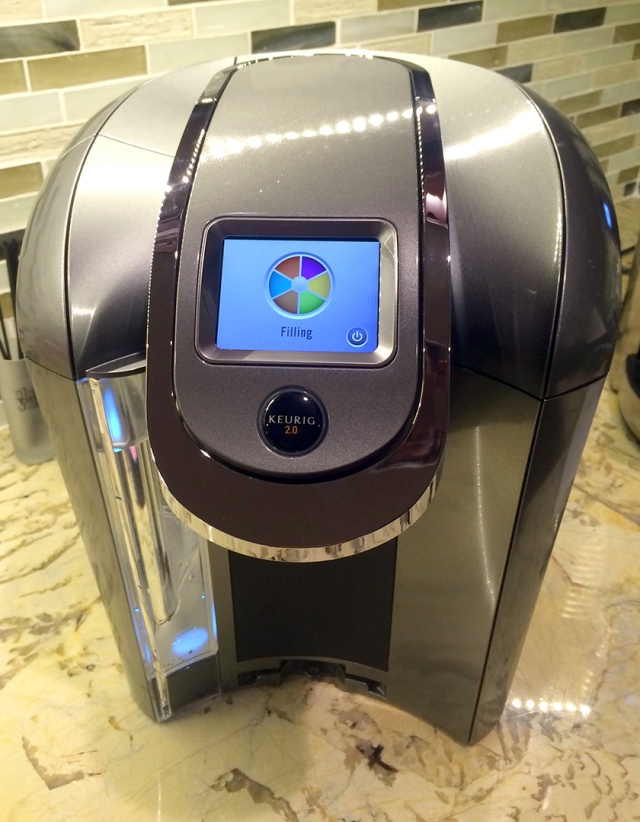 When I’d argue with people about how Keurig coffee cost so much more, their biggest reason for preferring it was the convenience.

I never thought it was that difficult to make a pot of coffee, but after having a Keurig for a couple of weeks, I now understand the convenience argument.

With the 80-ounce water reservoir, there’s no having to remember to put water in the pot before going to bed, or first thing in the morning.

We’ve been using the same K-Cup twice each morning, with Tammy getting the first cup and me getting the second. That works perfectly for me because I don’t like strong coffee.

On the weekends we use the K-Carafe and brew a bigger pot. I actually liked it so much that I drank 3-4 cups each morning.

While my argument about the coffee being more expensive this way is still true, I do like that Keurig included the reusable K-Cup. This way we can still enjoy the Keurig and use our own coffee. Although I know Tammy will continue to buy K-Cups, because she likes how they look in the carousel!

I have to admit, I’m totally digging our new gadget.

All told, I got over $300 worth of Keurig stuff for FREE. All I had to do was take a survey on Influenster (done), post about it on social media (done & done), and write a review at Keurig.com (done).

I know you are prolly thinking that Influenster hits you up with tons of emails, newsletters, etc., but that’s not the case at all.

Once you create an Influenster account, simply link your social media accounts, and the site will start asking you questions to find your areas of interest. After that initial setup, you’ll check back from time to time to see if you have an “Snaps,” which are additional surveys to determine if you are a good fit for something free.

Please use my referral link below so Influenster will know that I sent you.