Bellying Up at Bulldogs

People who know me know I love to eat and that I love my bulldogs, whether it’s Mississippi State, UGa or my very own Savannah. So getting to combine eating and bulldogs was something right up my alley. 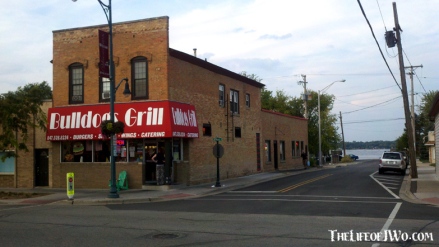 The Bulldogs Grill in Wauconda, Illinois.

When our friends Mike and Boobs (aka Teresa) told us about a place they liked to eat called Bulldogs Grill, Tammy and I knew we had to check it out.

I was even more excited when Tammy told me that she heard the place had been featured on Food Network’s Diners, Drive-ins and Dives because it would be the second triple D place we visited (to see the first place we visited click here.)

Turns out the place was NOT on Food Network, although it SHOULD be, but it was on WGN’s Chicago’s Best TV show and won 11 Reader’s Choice awards from Chicagoland’s Daily Herald newspaper.

On Friday Tammy brought home the menu and we started trying to figure out when we should make the nearly 40 minute drive from our house to Wauconda.

We decided to go on Saturday afternoon but there was still one more decision to be made, whether or not to shower.

I voted for not showering because it was already almost 4:45 and I knew that Tammy showering would mean it’d be an hour, at least, before we would be ready to leave. She wasn’t too happy with not getting to shower, but decided it would be OK as long as she got to fix her “crazy hair.”

We pulled out of the driveway around 5:15 and I grabbed the menu to start reading off the 31 different variations of burgers offered by the Bulldogs Grill.

I lasted less than 10 minutes before I started getting carsick and had to take a break.

Suggestions From a Regular

We drove by Bulldogs and saw there was line of people just inside the door. We figured the place MUST be good if people were willing to stand in line so we quickly parked and headed inside.

We weren’t expecting it to be the type of place where you order (and pay) first then sit down for your food, so we were glad we had looked over the menu on the drive over because trying to pick something off their big menu board was overwhelming.

As we were waiting in line I heard a familiar voice and looked up to see our friend Mike who was putting in a catering order for Boobs’ birthday party next weekend.

Since he’s a “regular” I asked what he normally orders and he told me I couldn’t go wrong with whatever I chose. Then as he was about to leave he mentioned that he liked the Hangover burger because it has a fried egg on it.

I let Tammy order first so I could figure out exactly what I wanted. She went with the Shroomer burger, which is “smothered with mushrooms and Provolone.”

Mike’s fried egg suggestion sounded good, but instead of the Hangover I went with the Barkley’s Skillet because it had ham, grilled onions, fries, cheddar and American cheese, along with the fried egg.

We also ordered a large Killer Garlic Fries that are topped with fresh garlic, salt and pepper, parsley and Parmesan. 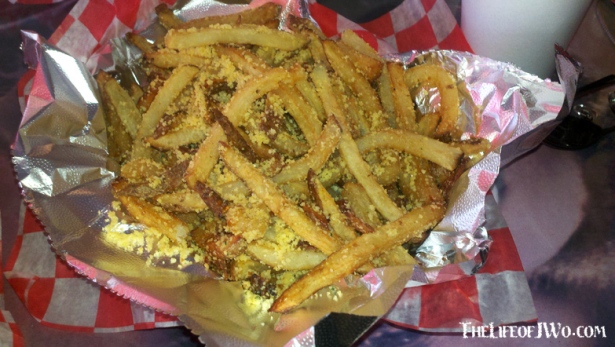 We were given our order number and headed to find a spot in one the 60-70 seats. We found a little spot in the back room and started looking around at everything on the walls.

There were also pictures of English Bulldogs all over the wall, which we loved, but thought was odd considering their logo looks like a French Bulldog.

Tammy: I’d be pissed if I got that logo. 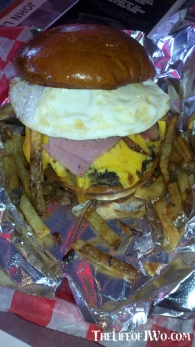 The Barkley’s Skillet B.C. (before cut).

It wasn’t long before our food arrived and we tried to figure out the best way to attack our burgers.

Tammy cut her burger in half so she could get a better handle on everything and I decided that might be the way for me to go as well. 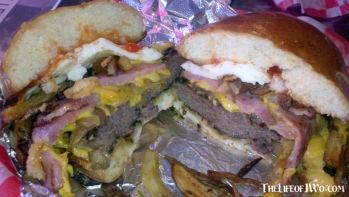 Inside the Barkley’s Skillet.

We spend the next few minutes in silence as we stuffed our faces with burgers and fries. Tammy eventually cut the silence with a suggestion about what we should do when we finished.

Tammy: We could go for a walk when we get home. I heard that walking after a meal is good for you.
Me: I don’t think I’ve ever walked after I’ve eaten.
Tammy: I bet you have.
Me: Yeah… to the car.

We put a good dent in our burgers and fries (Mike was right about the large fries being enough for four people) and got to-go containers for everything. I used the leftover fries to make hash browns for breakfast.

As we were getting ready to leave I reminded Tammy of our conversation before we left home.

Me: We SO didn’t need to shower to come here.
Tammy: Definitely not. I prolly would have come in here so overdressed.

Now don’t get me wrong because that’s not intended as a slight toward Bulldogs. It’s actually a compliment because we were so comfortable that we actually felt like we were, well… at home.

8 Responses to Bellying Up at Bulldogs