Best If Used By…

When you work in a department, you learn things about your co-workers on a fairly regular basis. Sometimes the information is good, as in “I volunteer at a dog rescue shelter,” while other times it’s bad, “my wife likes to be spanked.” Then there are times when information is shared that doesn’t make sense to you. That’s where I found myself recently.

I was sitting at my desk tending to an upcoming Xceleration Media magazine title when I heard my publisher Shawn throw what sounded like a rather large item into the garbage.

At this point I was just staring at him with my mouth open. Without even thinking about it, I found myself walking toward his desk, reaching in his garbage can, and pulling out the box.

Oh, Little Debbie you didn’t deserve to be treated this way.

Me: I can’t believe you threw these away.
Shawn: You can have them. I’m not eating them.

I set the box on my desk and a few minutes later another coworker, Jonathan, showed up, so I said he could have some muffins if he wanted. He instantly eyed the box, but then I made the mistake of telling him why Shawn had thrown them away.

Judging by the look on Jonathan’s face — and him slowly backing away to his desk — you’d have thought I told him those were meadow muffins instead of banana nut.

Me: You don’t want them either?
Jonathan: They are expired.

I couldn’t believe what I was hearing.

Me: Seriously? What is wrong with you two?

For the record, the muffins weren’t even expired. They had simply gone past the “Best if used by” date on the side of the box. 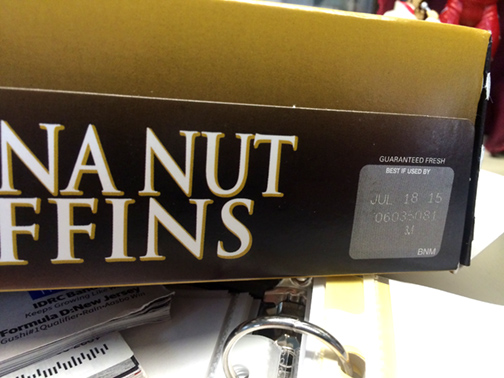 But their reactions led to the following questions from me:

Do you honestly think those muffins know what day it is?
You think they are sitting inside that box going, “Hey, only 2 days left guys!”
Do you think they’ll just instantly go bad once that date has passed?

The muffins weren’t just floating around all loose and carefree, they were all individually wrapped

None of my questions seemed to change their stance, so I went to another department to see if others felt the same way. I presented the situation to them and once again found myself in the minority as almost everyone agreed they wouldn’t eat the muffins.

At this point I’m sure some of you are completely grossed out by my admission of eating food that’s past its expiration date, so I feel like I need to clarify. I will not eat any and all foods that have expired. I’m talking mostly about non-perishable goods.

I don’t blindly drink milk that’s multiple days past its date — 1-4 days gets a smell test, anything after that is entering a high-risk zone. I’ve found that it usually depends on how cold you keep your fridge.

I won’t eat mayonnaise if it’s been sitting outside for 24 hours. When lunch meat goes past the date, I smell it, check it for fur, and if it passes both (has to be both, not just one) then I’ll eat it.

When I bring my lunch to work, I rarely put it in our fridge. I leave whatever it is sitting under my desk until it’s time to eat it. It’s not going bad in four hours while sitting in an air-conditioned room. I’ve been doing that for years and I’ve yet to miss a day of work from it.

Some people think that’s crazy, but isn’t it just as crazy to blindly throw out or refuse to eat something just because it’s past an arbitrary date on the packaging?

A few days later I brought in some blueberry mini muffins my wife picked up for me when she saw they were on clearance. Shawn wanted no part of them when I told him they had been marked down.

Me: There’s a reason they are on clearance, right?
Shawn: Yeah, it’s for the homeless people.

I couldn’t help but laugh.

Part of why I’m not as scared of expired food is because my parents owned a grocery store. There were plenty of times we’d have to pull items, like cereal, off the shelves if it was close to the expired, or best if used by, date. There was nothing wrong with that cereal — I know because I ate plenty of it. We simply had to pull it off the shelf because it was the law.

There are plenty or people who have had serious bouts of food poisoning, which is usually a result of circumstances other than food being expired, and I can understand how that can make them gun-shy about taking chances with certain foods. Surprisingly enough, I have never experienced food poisoning, so maybe that’s part of why I am so brave.

Shawn’s logic: If it comes down to me wasting $3 or being sick, I’m going to lose money every time.

Regardless, I mowed down all of my clearance muffins and most of Shawn’s expired ones — Jonathan even ate a couple of them — and I’m still standing. I guess I’m my work’s version of Life cereal’s Mikey.

What do you do with expired food in your house?